SAN ANTONIO - The thing about fads is they pass. Some of them last longer than others, but rarely do they sustain relevance as a consistent, dependable entity. And as San Antonio wreaked havoc on the interior defense of the Tyson-Chandler-less Knicks, two things were crystal clear. "Linsanity" - at its peak, at least - is fading, and the Spurs have never been a fad.

Tony Parker scored 32 points, Manu Ginobili had his best game since New Year's Eve with 17 points and Tim Duncan was as cerebral as ever as San Antonio beat up New York 118-105 in front of a sellout crowd at the AT&T Center. And this was a game the Spurs needed after three lackluster performances post-All-Star break. As Gregg Popovich mentioned following the game, they played with a ferocity he had not seen since the RRT. When his team plays with that kind of energy there are few in the NBA who can beat San Antonio, especially a Knicks team without Chandler.

Without its defensive anchor on the floor, New York is no more than pedestrian. Carmelo Anthony and Amar'e Stoudemire have all the money talent in the world, but watching them attempt to play defense in Mike D'Antoni's system without Chandler is comical. It was a free-for-all around the rim as the Spurs outscored the Knicks 60-38 in the paint, and if it weren't for the Spurs' 17 turnovers this would have gotten even uglier. Or prettier, depending on how you're looking at it.

But the Knicks had no chance in this one. Without Chandler in the lineup, Amar'e turns into the de facto center for this team (Josh Harrellson just doesn't count). If he's the last line of defense against a team with a point guard like Tony Parker who thrives when penetrating, New York is in big trouble. Couple that with the fact Carmelo, who has the ability to get off any shot in the world, took 24 shots to get 27 points and got to the line just one time, unless you're playing the Bobcats (and even then I'm not sure) you're in for a very long night.

After an absolute explosion to the start his career as the Knicks' starting point guard, Jeremy Lin has begun his regression back to the mean. It's clear the guy can play in the NBA - he had 20 points in this game - but does he have the capability of becoming a starter on a championship team? We have yet to see that, but I'm not sure he does. Still, it's difficult to tell given his current situation. He's surrounded by a coach (D'Antoni) and players (Stoudemire and Anthony) who have yet to prove they can lead a team to anything but a late conference playoff exit. Lin plays hard and, for a guy who's really more of a combo guard playing the point, shows sharp instincts. But if he's penetrating and playing more aggressively than his 6-foot-8, 240-pound All-Star swingman, it's not a recipe for success. As I said earlier, Amar'e and Carmelo have all the talent in the world, but many times it's masked by some incredible deficiencies. Tonight, without Chandler, those deficiencies were brutally exposed.

And this team is visibly frustrated, which caused for some chippiness at times during a somewhat helter-skelter game in San Antonio last night. There were several minor altercations throughout, including one between Amar'e and DeJuan Blair which resulted in a double technical. Stoudemire took a half swing at Blair before DeJuan retaliated with a push of his own, and the two had to be separated briefly. And while there were plenty of what looked like rugby scrums between the Knicks and Spurs, it was a Popovich moment that was perhaps the most, shall we say, entertaining. Up by 22 points near the end of the third quarter, Pop clearly had an issue with the officiating and took action. His initial pursuit of the referee earned him a quick technical, but he wasn't close to finished. By the time the "argument" was over, Popovich had chased his target all the way out to halfcourt before taking an early trip to the locker room as Spurs fans stood and cheered wildly in support. It was Pop's first ejection of the season, which is impressive considering there have already been 38 games played. Following the game, Parker blamed a bad bottle of wine from the night before as the reason for Pop's premature exit. 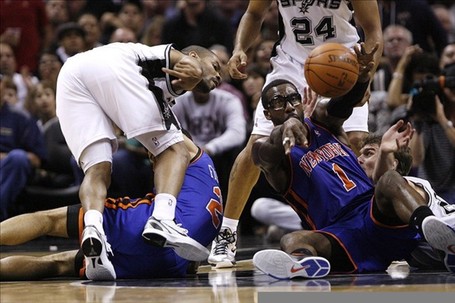 But credit must be given to the Spurs. To bounce back against a high-profile team like New York (there were a bunch of Lin jerseys in the arena, which was expected I guess) in a chippy, emotional affair was exactly what the doctor ordered after some really disappointing outings over the last week. Parker took complete advantage of the Knicks porous defense in the paint and was virtually unguardable throughout. (If the game had been closer and he'd been forced into more minutes, we would have seen his second 40-point effort of the season. It just looked too easy at times. Harrelson and Stoudemire guarding the paint? Please.) But most exciting of all was the play of Ginobili.

Manu looked great on Wednesday night. He was 7-for-10 from the field in more than 25 minutes of action, and the rest of his game was right on par with his scoring. His six assists were perhaps what the Spurs missed most about him, especially when he's dropping passes through big men's legs in the paint for easy dunks. While he's not all the way back, as he stated after the game, he's getting close.

On another note, there was a very scary moment in this game when T.J. Ford was hit from behind by Baron Davis as Davis pursued the offensive rebound, causing Ford to hit the floor. Just as he hit the ground, Tiago Splitter's foot seemed to come in contact with Ford's head, and the two impacts left T.J. nearly motionless on the floor. Given Ford's history with spinal stenosis and the types of injuries we've seen him suffer over the years, this was understandably frightening. During the ensuing timeout, he was completely unable to stand on his own, even crumbling back to the floor following an inital attempt to stand. He was able to walk, though heavily assisted, back to the locker room for tests, and fortunately was diagnosed with only a stinger and no neurological damage. He was back on the bench in the second half. The timetable for his return to the lineup is uncertain, but Gary Neal is expected to continue to man backup point guard duties in the immediate future.

So as San Antonio awaits the Los Angeles Clippers on Friday night, it can do so with more confidence than it's had after the two recent home losses. With Manu getting closer to where he needs to be and the Spurs boasting a nearly fully healthy roster, we should start seeing a group that looks more and more like a playoff squad. With Ginobili's return to health, it will theoretically mean less time for LWM heroes like Danny Green and Kawhi Leonard (though I can see Leonard getting more run down the stretch given his defensive contributions). With the kind of depth this team possesses, Pop has the luxury to mix and match where he pleases, but he won't just do it for the heck of it. Yes, he'll have his situational lineups in which Green will have a role, but as Pop said prior to tip-off, he'll probably see his minutes decrease with the return of a healthy Manu.

Danny has been great this year, but Pop and Spurs fans everywhere know who wins games in the playoffs. He wears the No. 20 on his jersey. 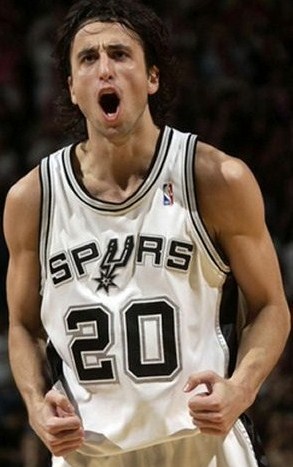 Perhaps the biggest beneficiary of the Knicks being without Chandler, who always seems to give the Big Fundamental fits. When Harrellson starts out the night guarding Duncan, you can usually guess how the game is going to go.

His best game since coming back from either injury. Manu looked as close to himself as we've seen in a while, and that's a huge reason for optimism in San Antonio right now.

There's a reason why guys like Pop, Tim and Manu continue to say this is "Tony's team." He continues to be the head of the snake for the Spurs and shows no signs of slowing down now, even with various nagging injuries. His left wrist and right calf were both wrapped up last night, but that didn't prevent him from playing in his usual aggressive, attacking style.