The Spurs faced a soft February schedule and capitalized with an eleven game win streak. They're making up for it with March's games, featuring playoff competition like tonight's match-up against the New York Knicks. They're the likely eight seed in the East but a real threat now that the core of Stoudemire, Anthony, Chandler and Lin is healthy. Despite some bruises, San Antonio has its players back on the court too and has the home-court and rest advantage over a back-to-backing New York. Missing an opportunity like tonight would be wasting the 11-2 February and risking a slide back into the playoff scrum.

Looking at the lineups, I'd like to start with two observations. First, Matt Bonner and Steve Novak could check into the game at the same time and might even guard each other for long stretches. This is guaranteed to be entertaining and might be the kind of under-card that is a better show than the headline bout. Second, Tyson Chandler is the best player on the Knicks hands down and is one of the great centers in the NBA, even without the added "that everyone forgets about". He was a key reason why Dallas broke through last year and is thriving with the jump in minutes as he anchors the suddenly respectable New York defense. 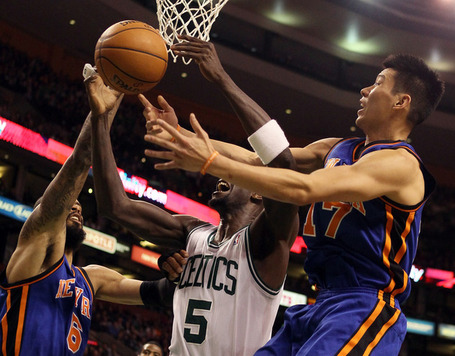 Not to take anything away from the Jeremy Lin kid of course. He uses the possessions on offense that Chandler and Landry wants nothing to do with and turns them into quality looks for himself and others. Despite the turnovers, Lin is still the most efficient and effective part of an offense that was dysfunctional and doomed before his emergence. He's a good defender and one of NY's only two-way players - he bridges the gap between defenders who can't score very often like Chandler and scorers who can't defend like Anthony.

There's hardly any more he can do for his team: he's third among guards in Assist Rate (Tony Parker is seventh) and takes 30% of his team's possessions while on the floor. That's second on the team and puts him in the elite Paul-Rose-Westbrook-Paker-Williams category of point guards who score, distribute and don't suck on defense. For the prospects of entertaining basketball on TV over the next few years, I hope Lin maintains that level... give or take a speedbump like, say, tonight.

Gregg Popovich's Spurs have the edge in continuity and preparation, like always. They'll have a plan for the evolving Knicks that exploits their weaknesses and defends their strengths and makes it look like we understand their team better than they do. In the grand scheme of a single basketball game it won't matter as much as who comes to the arena with the hot hand, but it comes into play when the teams are closely matched on talent and motivation. Even though it's our only match-up against the Knicks I'm sure Pop has a plan for drawing Chandler away from the basket, getting Bonner to wreak havoc on Novak and containing Jeremy Lin, and I hope the game is close enough for it to make the difference.

Game Prediction: SPURS by EIGHT: Hoping here the Spurs pull ahead in the second or third and keep suspense at bay and 'march' on to the even more challenging Western Conference opponents ahead.