Share All sharing options for: Another slow start hurts Spurs in loss

SAN ANTONIO - Physical energy within the human body is a funny thing. Its qualitative nature makes it difficult to predict the level at which it will manifest itself and why, but generally speaking there are certain causes that typically affect how prevalent it will be from game to game. And though it is a by-product of an individual's current physical condition, it is often contagious to the point where it affects an entire group. The Spurs were lethargic early in Sunday night's game, and that's never a good thing when you play the Nuggets.

Ty Lawson was one rebound shy of a triple-double and his teammates came through in timely situations as Denver took a 99-94 wire-to-wire win in San Antonio and overshadowed the return of Manu Ginobili on Noche Latina at the AT&T Center. The Nuggets - the league's top-scoring team - didn't necessarily shoot that well or score at the pace to which they're accustomed, but their energy on the glass and the defensive end kept the Spurs at bay throughout the contest. Denver led almost the whole way (the Spurs tied the game 49-49 early in the second half, but it lasted only 24 seconds) and never let San Antonio get control of momentum, and they did it without Nene, Rudy Fernandez and Danilo Gallinari. Even after climbing back from an early 16-point deficit the Spurs found inopportune times to make costly errors.

There's just something off right now. Since posting an 8-1 record on arguably the franchise's most successful RRT, it's been a different team we've seen in San Antonio recently. Lanes were wider for Tony Parker, good looks from the perimeter were more abundant and Tim Duncan was looking like an All-Star snub. Trying to fit several key players back into a rotation that had become comfortable, something the Spurs have been faced with since the break, is never an easy proposition. It's one thing when it's complementary players trying to get back in sync, but when it's somebody who typically has the ball in his hands more often than not it's a different story.

But it's difficult to tell why the pace of the Spurs' typically free-flowing offense has suddenly slowed. You could speculate it has something to do with the aforementioned syncing process for those returning from injury, and it never helps when Duncan begins the night as a game-time decision for an 8:30 p.m. tip-off with reports of stomach sickness. (He actually played really well, but in less than 24 minutes of action.) But generally speaking, the return of Manu to the lineup usually means a change in emotion and an increase in energy. And despite an instant crowd reaction upon entering the game in the first quarter, the momentum actually began to flow toward Denver when Ginobili stepped on the court.

The Nuggets went on a 21-7 run once he came off the bench to push the lead to 40-24 and held off the Spurs' comeback bid down the stretch. When you start slow and leave yourself a deep hole to climb out of, it's often that last step that's the hardest to make. And for whatever reason, whether it be energy, timing or both, San Antonio couldn't quite break the seal Denver had on the scoreboard. Ty Lawson was too fast, Kenneth Faried was too dunky (seriously, each of those slams completely deflated the crowd) and the Nuggets just played with more intensity on this night. Committing 14 turnovers and being outrebounded 49-40 isn't a great formula for winning if you're the Spurs.

And it's ironic, isn't it? How the return of a player of Manu's caliber can potentially disrupt the flow of a team? And I'm not necessarily saying that was the case tonight because this offense hasn't been operating at a very high level in any of the first three games post-RRT. Even the 30-point blowout of the Bobcats wasn't really all that pretty to watch. But it's games like these where you've just come to expect him to make that big play late, when it matters most. 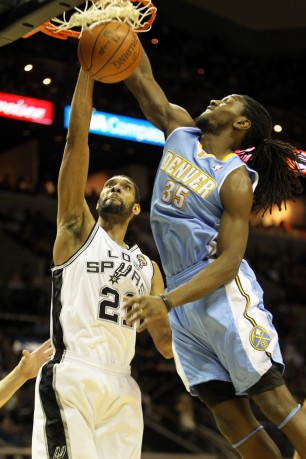 I'm really just raising some points of discussion here as this homestand has not started the way the Spurs had hoped, especially given their success during the road trip. It's only temporary, as most funks are. LWM lasted longer and went better than anyone had expected, and all the while the reserves were stepping up and playing some of the best basketball of their careers. While they were great and even spectacular at times, none of them are Manu. Don't let the success without him fool you. No Manu, no title chance. It might take time for him to become fully involved and in his normal flow within the offense, but the potential payoff is more than worth the growing pains.

So as we watch Pop mold his rotation the way he'd like with what is now a full complement of players, keep in mind this team is still a big work in progress. That might be weird to think about given where we are in the season and the Spurs' success thus far, but T.J. Ford and Ginobili were major cogs with defined roles in this system. Missing two months of basketball will put you behind the 8-ball dramatically, especially given the specific timing of this offense. It's just a matter of time before we start to see the Spurs clicking again.

But it needs to start happening again soon as San Antonio now holds just a one-game lead over the Los Angeles Clippers in the loss column for the No. 2 spot in the West. With such a tight race in the conference, a bad seven-game homestand could be very problematic and erase much of what the Spurs were able to do during LWM. But that starts with bringing the right energy level from the start. It's difficult on nights like these when Duncan is sick and DeJuan Blair is forced to leave the game early with a knee injury (he played sparingly thereafter, but it appears as though Blair will be fine), but the Spurs still found themselves in a position to win. You hate to give those away at home.

Despite the disappointment that comes with losing, San Antonio can keep in mind it was just a Sunday night in early March. And while Manu might not have hit the big shot the Spurs needed, with a little luck (and, hopefully, a season-long bill of health) he'll again see the chance to make his indelible mark.

Despite playing only 24 minutes of under-the-weather basketball, Duncan was surprisingly energetic. It's been fun to watch him get a few dunks over the past several games.

TP was among the slow starters for San Antonio, but he really bounced back to help in the comeback bid. His jumper has eluded him recently, but the Spurs' lone All-Star looked to have regained the touch in this one.

What a difference Lawson makes to this roster. He is the engine that drives this machine, and against the Spurs his motor never stopped. His shot from the top of the key with 11 seconds remaining was too much for San Antonio to overcome.

Final note: Kawhi Leonard had another strong effort in his return to the lineup. Nine of his 13 points came in the second quarter when the Spurs desperately needed something to light a spark.