Share All sharing options for: What the Positional Revolution is and how it applies to the Spurs

I recently posted an article proclaiming Gary Neal to be a good option as back up point guard, in which I relied heavily on the combo guard's place in the Positional Revolution. I made the mistake of not explaining what that concept actually is and how it relates to the Spurs, exactly. I assumed people knew what I meant which was a ridiculous mistake on my part, since the bulk of the debate on the positional revolution took place two years ago and didn't necessarily reach mainstream acceptance. So consider this article a prologue to that one and I hope it answers the questions the first one brought up.

What is the "Positional Revolution"?

I will try to keep it concise and pragmatic, since the discussion veered towards the abstract pretty quickly with people wanting to abolish positions all together. For a better understanding of the subject I encourage you to read the linked posts. Also, just for fun, check out these awesome Z charts Tom Ziller came up with.

The Positional Revolution is a phrase coined by Betlhehem Shoals of Free Darko fame, to refer to how the evolution of so many players' games had made the traditional positional terminology outdated. Rob Mahoney of the great Mavs blog The Two Man Game expanded on the subject and gave a really good definition of how to come into the debate from a practical standpoint. This extract is particularly illuminating concerning why a new way to define players is needed:

To those still clinging to what they know, I'd ask this: what's a power forward? What characteristics link Dirk Nowitzki, Tim Duncan, Rashard Lewis, Lamar Odom, Reggie Evans, Tyrus Thomas, and J.J. Hickson? Not rebounding. Not scoring. Not skill set. Not height relative to their teammates. Not even the spaces they occupy on the floor. I'm at a total loss as to the criterion that would group that bunch together, which makes the assessment "Player X isn't a real power forward" pretty much worthless. I think I know what it means, but without the ability to define the contemporary power forward, how could I really know for sure?

The label of Power Forward is not the only one that makes no sense when comparing players. Following Mahoney's format I could ask what characteristics link Manu Ginobili, Ray Allen, Kobe Bryant, Tony Allen, Paul George and Keith Bogans. You could do the same with just about every position.

Mahoney's article was inspired in great part by a post by Drew Cannon from Basketball Prospectus. Here's Cannon:

... the position spectrum developed to combat the speed and height of an unknown opponent. Essentially, you wanted to have the most athletic player at each height you could have at the highest possible skill level. And, since skill level is also easier to find the lower you go on the height spectrum (by way of natural height distribution), the ballhandling duties often fell to smaller players.

But what do you really need from a lineup?

On defense, you need to be able to guard your opponents. This means you have to be ready for speeds and heights of all kinds. You need to have a player capable of guarding each of the five traditional C-PF-SF-SG-PG positions. We'll call the players capable of defending each position "D1" through "D5," respectively

Mahoney improved on the chart Cannon came up with to account, not for position, but for size and athletic ability. 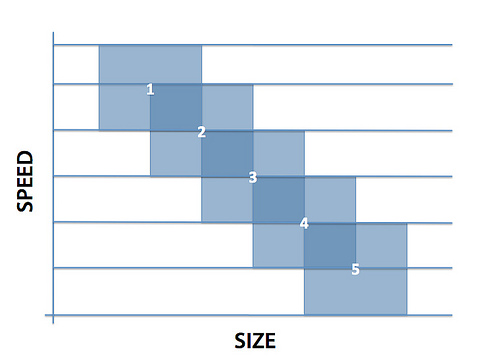 This way of thinking allows us to make a simple classification of players according to the oppenents they can defend. Ideally a team would field players that can each defend one of the other team's players. A D1 doesn't necessarily have to be a guy that would have been considered a point guard in the past. Lebron James is arguably D1-D4, meaning that he can defend 4 type of players, including the smallest and fastest, effectively making the need to have a traditional point guard on the court nonexistent. As long as the players from one team can guard their opponents, traditional labels are meaningless on the defensive side of the ball.

On offense, the roles that were traditionally associated with a position have changed as well. Point guards are not necessarily passers, power forwards are not rebounders, etc. Similar to what happens on defense, all a team needs to do is have the right combination of players to distribute the offensive responsibilities. You need Creators, (spot up) Shooters, Scorers and Rebounders. It doesn't matter which player provides those contributions, or what traditional position they play. As long as someone can create, it doesn't matter if it is a point guard or a small forward. All a team has to find is the right combination of players to make whatever offense they are running do so effectively. Some offenses need more shooters, some more creators. Understanding the principles of the positional revolution is of particular importance for teams that have an unusual star player like Dirk Nowitzky but it has applications for every team, including the Spurs.

How the "Positional Revolution" applies to the Spurs

This labels are all a work in progress but they provide an instant upgrade over the traditional positional labels. I've adjusted the roles on offense from Cannon's original 4 of Creator, Handler, Scorer and Rebounder. There could be more roles on offense than the ones I assign below. Kawhi Leonard could be a Cutter, Tiago Splitter a Screener and Cory Joseph could be considered a Handler more than a Creator.

Looking at the Spurs roster, we can define players by the players they can guard:

Offensively we can define them by their skills or roles:

The reason understanding this new definitions is important for Spurs fans has a name: Manu Ginobili. Manu is not a traditional shooting guard in the Reggie Miller or Ray Allen mold that needs someone to create for him to spot up. Ginobili is at his best with the ball in his hands creating for himself and others, just like Parker and most traditional PGs. Manu is able to adapt to playing with Parker because aside from being a Scorer/Creator he can also fill in as a Shooter, which allows the Spurs to play the two together. The reason Manu came off the bench for so long was to maximize both his and Parker's time handling the ball and the only reason taking the ball out of Manu's hands makes sense is because Parker is also and elite Scorer/Creator. Making Manu a spot up shooter to make room for a mediocre but ball-dominant guard makes absolutely no sense.

That's where a combo guard comes in. A player that can be a secondary playmaker when called upon but who can also get out of the way and be a spot up shooter makes a lot more sense for the Spurs because of Manu Ginobili. Since Manu is not a "real" shooting guard (in the mold of the guys I mentioned before) he doesn't need a "real" PG. Something similar happens with Kobe Bryant, who had the most success in the Triangle Offense, where the point guard is more of a spot up shooter than a creator and plays start from the post.

Even with Manu starting, the Spurs have always managed to have either Manu or Tony on the court for most of the game. Manu usually checks out with around 6 minutes to go in the first quarter and returns either with a minute or so to go or at the beginning of the second, when Parker rests. He then comes out and Parker returns. Manu checks in to finish the first half. A similar pattern is presented on the second half with Manu taking more control of the game as time goes by. That rotation pattern reduces the time where the team plays without both Tony and Manu to a minimum, making it unnecessary for the Spurs to give meaningful minutes to players that replicate that Creator role, without having to provide shooting.

Understanding that roles are more important than positions when putting a unit on the floor, allows us to analyze the dynamics of lineups and figure out why some combinations work better than others. As an example, Matt Bonner and DeJuan Blair might be listed at the same position but their roles are completely different. Blair's skill set makes it hard to pair him with a lot of other players on the roster while Matty's symbiotic relationship with both Kawhi Leonard and Tiago Splitter is a huge part of why he gets playing time. Leonard lacks shooting but provides rebounding while Bonner spaces the floor. Splitter need shooters surrounding him to be the most effective both on the pick and roll and in the post.

That's just one example of how discarding traditional positional nomenclature and instead focusing on roles and skill sets can improve our ability to understand the game. This is also why I advocated for Neal to get time as a backup point guard even with a healthy Ford. This is far from an exact science so disagreement is to be expected, but I wanted to give some context to the first post and provide some information on a new way at looking at lineups and analysing the game.