I never have been a George Karl fan, but I am starting to come around on that. Sure, he has a grating sideline personality, but many coaches do. It's best to look past such things and focus on what his teams actually do, how they play and interact with each other, how they grow under his guidance. I am not fond of the frenetic style of play of Karl's teams, but my goodness, they play. Karl routinely puts a team on the floor that is energetic, full of confidence and optimism regardless of the score, and just hard to beat. This I admire. He's done it for a long time, and he's done it everywhere he goes. Hats off, George Karl.

In some ways I think of the Denver Nuggets as the 76rs of the Western Conference. Both teams have savvy, experienced coaches, and they are getting it done with depth and teamwork and without the presence of elite, All-Star caliber players. Denver has had some injury issues recently, the most damaging being the fractured foot of Danilo Gallinari. They were hoping to get their talented young forward back this past week, but apparently he is still not ready to go. Also out has been Nene with a strained calf. (We know all about strained calves, don't we?) That's a lot of talent to be missing from ones front court, but Coach Karl has made some adjustments to his lineup recently, most notably sitting the Birdman Chris Andersen for the last four games in favor of a rotation of Kosta Koufos, Timofey Mozgov, and the rookie Kenneth Faried, and this bunch has been pretty darn effective, Faried in particular showing a great deal of promise. Must be nice to have so many bigs! Mozgov sprained his ankle on Friday, so the front court may be thin tonight. 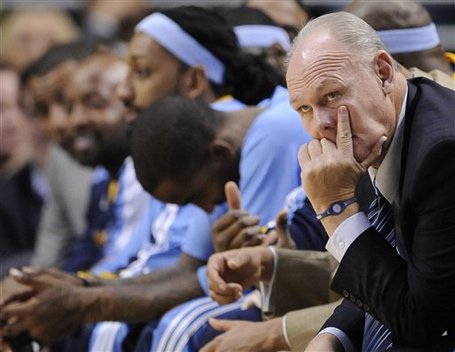 The player that has really been the catalyst for this team however has been their starting point guard, Ty Lawson. When he is dribble penetrating the lane, he does a lot of the things for Denver that Tony Parker does for San Antonio. Not unlike our meeting with the Bulls a few nights ago, the matchup of point guards will be a big key for this game. It's been a rare sight indeed this season for Parker to be outplayed by the other team's poing guard, and I don't expect that to happen tonight, but Tony will have to be sharp on both offense and defense.

The Nuggets currently sit in the eighth spot in the Western Conference, but seem to have things back on track over the last several games. I tell you, some good teams are going to be left out in the cold out West when the playoffs begin. Denver leads the league in points per game at 103 per game, although they give up points at a pretty high clip as well, at 101.2, near the bottom of the league. They rebound very well, and are near the top of the league in assists per game. Lawson and backup point guard Andre Miller are both averaging over 6.5 assists per game themselves. Denver ranks 3rd in the league in field goal percentage. They shoot a lot of threes, 5th in the league, although their percentage from behind the arc only ranks 20th. Denver gets to the line a lot, ranking 1st in free throws attempted, and a big challenge for San Antonio will be keeping the Nuggets out of the lane while minimizing and-one opportunities and free throws. Denver is not the staunchest defense around, but they do get a lot of steals. The Spurs have done a really good job this season of taking care of the ball, and that will be important tonight, because Denver loves to get points on the run before the half court defense has time to set up.

Game Prediction: Both teams are a little banged up, with key players possibly returning, or maybe not. Does Manu play tonight? If so, I frankly don't care who wins! But I'm picking the Spurs to keep Denver's offense below the century mark and add to their stellar home record.

As always Tony must dominate Fisher, and NBA league pass is recommended for those who are willing to pony up the cash. Almost every Spurs game will be broadcast there, which is especially helpful for those of us who aren't in the San Antonio area. Please don't post links to illegal game feeds in the game thread. Links to illegal feeds are not permitted on SBNation, but you can probably find them out there on the interwebs if you're resourceful and desperate.