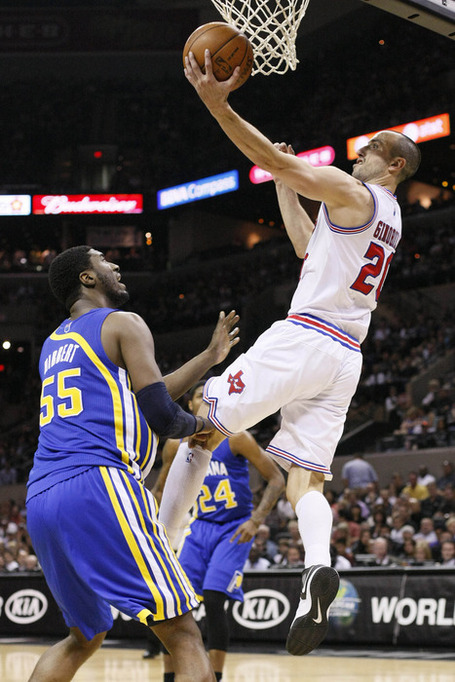 Spurs play in their Dallas Chapperals uniform and knee-high socks. Very unusual look, but a welcome change. Blair gets a sharp elbow to the nose from Roy Hibbert on a rebound attempt. Blair exits the game, subsequently to the locker room to get the bleeding to stop. George Hill enters for a standing ovation from the crowd, but was ineffective in his minutes during the 1st. 11 different Spurs players played in the 1st quarter. At the end of 1, Spurs were up 25-18. Stephen Jackson came out strong to start the 2nd quarter, scoring a transition (BANKED) three, and a transition J. Game play slows down until the Spurs bring in Tony Parker again, a little more than halfway through the 2nd. The Spurs really broke away from this one a little more than midway through the 2nd thanks to Tony Parker who got what he wanted from the Pacers D, and Manu was draining threes at will. Spurs end the half 64-48.

Spurs start the 2nd half with sloppy work on both the defensive and offensive end. To combat the slop, Pop brings in Stephen Jackson who is very active on the defensive end. A majority of the 3rd quarter was trading baskets. End the 3rd 78-90. Early in the 4th quarter though, the Spurs started to push the pace again and slowly started pushing the lead back to upwards of 15 at times. The Pacers weren't done though, and around the halfway mark, they get it to within 7, 92-99. After it got this close, the Spurs would never look back. Spurs win 112-103.