Share All sharing options for: Matt Bonner Really IS As Good As The Stats Say He Is

A couple of days ago I stumbled upon a great article form SBNation's Milwaukee Bucks blog Brew Hoop, that caught my attention. It was about the Bogut-and-Jackson for Ellis-and-Udoh trade and it revolved around the idea that people were using advanced stats to defend Udoh (a plus/minus darling) while completely disregarding them when discussing Ellis. The author argued that you can't pick and choose when to believe in a certain metric (in that article's case it was plus/minus), just when it says something positive about a player you like but disregard it when it shows that a fan favorite might be detrimental to the team.

Spurs fans, myself included, have a different problem. We have a hard time trusting plus/minus not because it reveals something negative about a player we like, but because it seems to build up a player that we are convinced is not quite as good as the stat seems to indicate. I'm talking of course about plus/minus wizard Matt Bonner.

There's one quote from Van Horn's article that particularly caught my eye:

Everyone readily accepted the insights of advanced stats when evaluating Udoh's value in the trade. There was literally nowhere else to look to see exactly how good he is at basketball, yet it's difficult to find even a stray negative comment about adding Ekpe to the mix in Milwaukee -- despite the fact that there are legitimate reasons to be concerned about him too, which I will get to in just a bit. When stats say positive things about players, they typically become a lot more appealing to everyone. Who wouldn't want to hear that players on their favorite team are better than they appear?

The answer to that last question is, apparently, Spurs fans! At least, those who tend to comment on Pounding the Rock. When we jokingly talk about Bonner's plus/minus numbers we are actually criticizing any stat that considers Matt Bonner a very good player. Matty is a pretty limited situational player on offense and pretty bad at defense in the eyes of many: not the type of guy that helps make a good team better and any stat that contradicts that must be wrong. After taking a better look at the numbers, however, it became harder for me to deny that, hey, maybe Matt Bonner is not so bad after all. 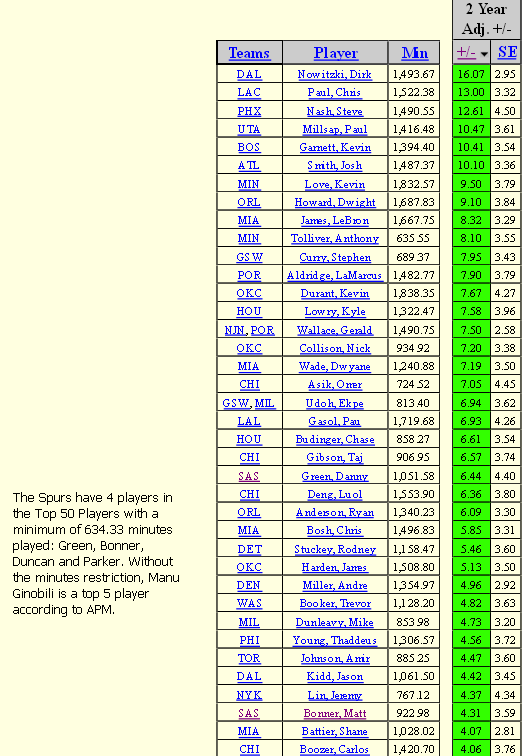 That table shows Matt Bonner to have one of the top adjusted plus minus in the league. A lot of players that are conventionally considered to be elite are on that list but so are some other guys like Chase Budinger and Anthony Tolliver, which makes it's hard to accept that it could provide conclusive insight as to player value. APM is clearly not the best stat for evaluating players relative to one another, but what it can do is give us a good idea of who helps a team and who hurts it. And Bonner's numbers suggest that he is one of the players that helps his team the most.

A problems with APM is collinearity, the reason most of us might be inclined to disregard the stat's value in assessing Bonner's contributions. I'll let DanielIM, the guy who penned this great article on APM to explain it.

Collinearity occurs in this data because of the way coaches use rotations. P1 and P2 may always go into and come out of the game together-so which one causes the results? Their numbers would be identical, except for the few times they don't come in or go out together-and those few cases would dominate each of the players' results. So, say they always played together except 1 possession all year. If the team scored (efficiency = 200) then the player out there at that time would be rated +200 above the other player. They together may have to sum to 0 (known from all of the other stints together), but P1 is rated +100 and P2 -100 because of the 1 time they did not play together. Now obviously, this never happens to this degree, but it does happen somewhat.

A second case is when P1 and P2 are only substituted for each other. Suppose P1 and P2 both play center. Suppose P1 is Dwight Howard and P2 is Marcin Gortat. They only sub for each other, for just about the whole season. When this is the case, we only really can detect how they relate to each other, not how the 2 of them relate to their teammates. For the season, the team may be +8. There is no way to know whether the center position is +10 and the rest is -2, or the center position is -2 and the rest of the team is +10. What numbers are returned for the team are subject to the vagaries of the few minutes when the situation is different.

That is a valid concern: Bonner could have those great numbers simply by sharing the court with some of the best players on the team while never having to play alongside the weakest links. With that in mind, I headed over to 82games to see if Matt was getting his gaudy plus/minus numbers by riding the coattails of better teammates. 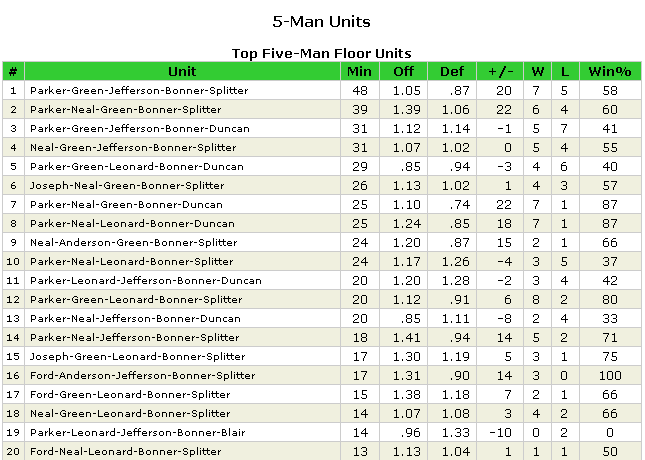 That table shows that Matt Bonner has played in a lot of different lineups with a lot of different teammates of varying quality but those lineups have still managed to get good plus/minus numbers not only this season but the one before, too. The one player Bonner seems to share the court with the least this season is DeJuan Blair and is not hard to see why (-10 in 14 minutes) but that hardly explains Matty's numbers. Of the top 20 lineups featuring Bonner only six are in the red and three of those, amazingly, include both Duncan and Parker.

Even if we take account of the fact that plus/minus gets more accurate with a bigger sample size, this information tells us that the team seems to produce better results when Matt Bonner is on the court regardless of his teammates. The question left to answer now is, why? 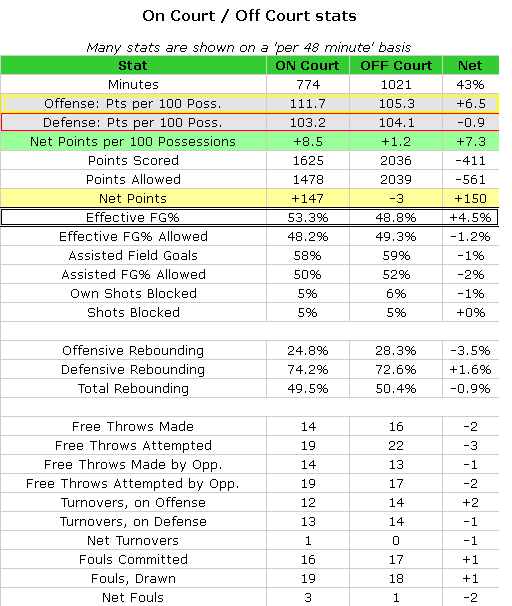 Those are the numbers with Bonner on and off the court. The first thing I noticed is that the defense is slightly better when Bonner is in but the offense improves dramatically. Why is that? Exactly the reason we might have suspected: the team shoots the long ball better with Bonner on the court (the eFG% sees a 4.5% increase) while the only aspect in which the team gets noticeably worse is offensive rebounding, which is not something the Spurs emphasize anyway. The defense, as mentioned before, gets a only marginally better but the uptick in offensive production is what's really impressive.

What does this all tell us about Matt Bonner?

I'm apprehensive about drawing conclusions based solely on a very limited study of one player's plus/minus numbers (especially one I, an advanced stats noob, did), but everything seems to indicate that Matt Bonner actually does help the team with his shooting and spacing more than he hurts it with his mediocre defense and lack of rebounding. It also seems to mean that while being an equally flawed defender, DeJuan Blair (the player Bonner usually replaces in lineups) usually provides only offensive rebounding but not much else on that side of the ball, as opposed to Matt. Does this mean that Bonner should get more minutes or that he is the best option regardless of match-ups? Of course not, but it does suggest that we might be selling Bonner short when we dismiss him as a player. Despite being unintentionally hilarious on the court, Matt Bonner is a limited but ultimately very good rotation player, and a net positive whenever he steps onto the court.

What does it mean for the team?

If I'm hesitant to say something conclusive about Bonner imagine how hesitant I am to try to draw conclusion about the team as a whole, but considering that the top five lineups that include Matt Bonner according to raw plus/minus also include Gary Neal, and since some of the team's best overall lineups also include both sharpshoooters, one could argue that the Spurs are at their best with shooters on the floor even if the defense suffers slightly. That, in time, means Pop might be right and the Spurs have transitioned into a team that tries to win with offense instead of attempting to be the type of defensive juggernaut they once were. Scary notion for Spurs fans to accept, I know, but alas, it looks like times, they are a-changin'.