Spurs keep rolling on the road, hold off opportunistic Kings 117-112

Share All sharing options for: Spurs keep rolling on the road, hold off opportunistic Kings 117-112 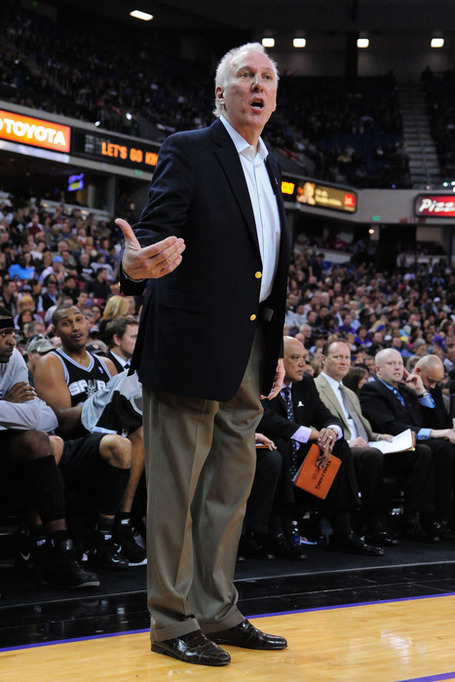 "To be or not to be... that is the question. Whether 'tis nobler in the mind to suffer... hey, HEY! Ref, I'm an artist and the Power Balance Pavilion is my stage, dammit!"

Five games in six days. Six games in eight nights. Admittedly, I kind of got tired seeing the San Antonio Spurs almost every day on a computer screen. Watching them play the once again lottery-bound Sacramento Kings plus the reality of a team playing with nearly-dead legs most likely contributed to that, too. Still, somehow, what would have been the occasional scheduled/expected loss on the standings turned up to be a win, and perhaps became what could be the most improbable of streaks in the twilight of the Duncan-Ginobili-Parker era. DeMarcus Cousins was bulldozing through the Spurs front line, determined to show up an all-timer. Isaiah Thomas left foot prints on the front, back, and sides of supposedly MVP candidate Tony Parker. And yet the Spurs managed to survive the onslaught, and come out of it with a message -- "deep" is the old-new buzz word for "sexy", and black (or more specifically, black AND silver) is back and in again.

It has been said multiple times already, and even validated by Tim Duncan himself that this is perhaps the most talented Spurs team from top to bottom. I'd definitely buy it except that why do I get the feeling Tim has said this before?

Since that big Richard Jefferson trade a few years back, the team has embarked on a two-part mission of 1) replace the old, upgrade with the new or somewhat new; and 2) tighten screws, buy cheap, minor replacements to plug the holes. It feels like rebuilding on-the-fly, and maybe there's some truth to it. We seem to have a reconditioned Duncan who's still able to hang with the best big men in the league. We've added this season's "who's that guy?" in Danny Green. Best of all, the Spurs seemed to have found a cog it didn't expect to be so useful from the get-go, right Kawhi Leonard? 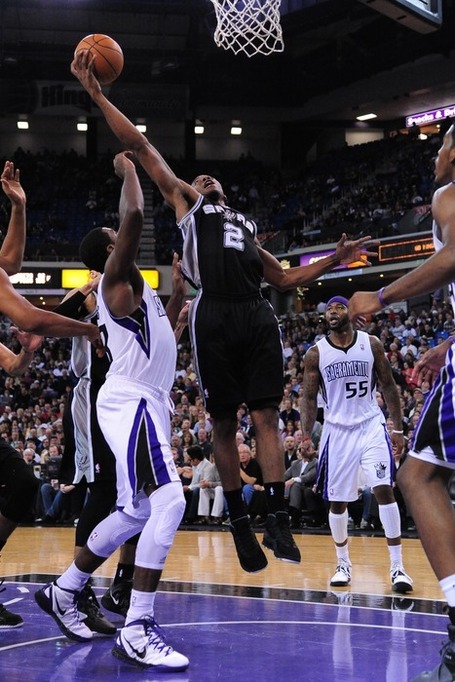 If Kawhi was any kind of gun, he'd be the one that comes with a silencer. The rookie took top scoring (19 points) AND rebounding (9 boards) honors for the Spurs in probably the most quiet fashion I've ever seen reminiscent of... well... Tim Duncan. He was involved in a lot of critical plays -- nailing timely three-pointers, grabbing offensive rebounds, getting a hand in passing lanes -- and yet remained as emotion-less as ever.

In one sequence in the fourth quarter, Leonard positioned himself on the right corner spot from the basket where the Spurs like their wing guys to camp out. The score was 99-96, the Spurs holding a very slim lead, and Parker was trying to make a play. Tony shoots a 15-footer, misses with the ball ricocheting off to the left side of the rim, and in comes Kawhi swooping from the other side to grab the crucial offensive rebound. He gives it back to Parker for the reset as if it was nothing, and routinely goes back to his little corner spot. No biggie. The next shot ended up being a Stephen Jackson airball three-pointer, but still, the Spurs got an extra possession out of it and added to the Kings' late-game frustrations. Makes me think that maybe Pop has a remote control and controlling Leonard on the sidelines.

But K-Leo was just one individual on a night where the Spurs' bench made a huge difference, outscoring their Kings counterparts by a whopping 55-20 margin. I still maintain my skepticism of how much having a really deep roster can help in the playoffs, but during the regular season on tough six games in eight nighters? Very deadly.

It's helpful to have very capable backups to keep the team's head above water, and allow the stars to maybe coast a bit for them to have enough in the tank to close out the game. This is what exactly happened as Patty Mills, Tiago Splitter, Stephen Jackson and Gary Neal gave that much needed shot in the arm that paved the way for Manu, Tim and Tony to close out the biznez with a flurry. Mills, in particular, scored his 7 points in such a hurry (only 6 minutes total playing time) that you'll barely remember it. Splitter, back from being out several games, probably used up everything he had in the tank during his first 7-8 minutes. Meanwhile, Neal and Jackson did their best impression of "Wonder Twin Powers Activate!" and made the big balls baskets early to midway in the fourth quarter to repeatedly quell any Kings uprisings. 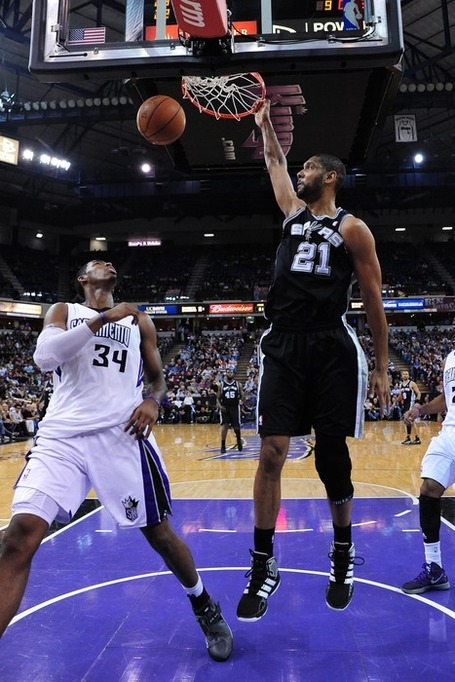 "Totally not jumping while dunking...okay, maybe I did. Just a little."

At this point, I'd like to talk a little about Captain Jack a bit. I've been known to show some apprehension from the trade, but fortunately, Jack has been slowly breaking my walls down like Chris Jericho's entrance song. This is one of those games wherein his incredibly strong desire to make things happen went his way, and it was satisfying to watch. The wide open three-pointer he airballed in the last quarter did not even shake his confidence one iota. On the next Spurs possession, Jax smartly fills the lane on a Parker-initiated fastbreak, receives the pass on the go, and makes a tough, contested layup over a Kings player (Thompson, I think). A couple of plays later, he drains a usually make-you-go-mad toe-on-the-line long two-pointer, but this time, the circumstances do not warrant any disappointment but just relief. On the ensuing defensive possession, he RISKS drawing a charge on a barreling Cousins, and succeeds in doing so. Again, it's one of those things that, if it went awry would have made you done your best DeJuan Blair S-M-H impression, but he succeeds, and you go on to do your quiet fist pump a la Michael Jordan draining one of his many game winners like it was business as usual. A few more of these in the playoffs, and I'll be making love to the thought of Stephen Jackson making love to pressure (yucky visual I know... just... don't imagine it).

/downs another glass of Kool-Aid

So as we continue to trudge on to the playoffs, everyone seems to be finally healthy, and the insane depth continues to be in display. Honestly, I'd feel a lot better about this team's title chances if we get to face some stiffer competition the rest of the way, but for now, we await an old friend, Indiana George, on Saturday. It should be interesting.

3 - Tim Duncan. I thought him being able to hold his own against a determined DeMarcus Cousins was very critical to the victory.

2 - Manu Ginobili. You miss his scoring? There you go. By the way, that step-back (more like step-sideways) buzzer beater three in the first half was SICK. Welcome back, The Sickness.

1 - Kawhi Leonard. Everybody's in love with this man, but he continues to ward off our advances.