I had a rather strange feeling of deja vu last week at the Minnesota game watching the Spurs take the floor with Stephen Jackson on the wing. A lot has happened in eight years, Lord knows I myself have gone through numerous changes along with the rest of the world, yet here before my eyes was nearly the same team as the one that closed out that championship season. Same coach, same players, same arena. Weird. They didn't really look any older, either. Jackson captured the sentiment quite well a couple of days later, sounding like a prodigal son who has found his way home again, and openly appreciating the unchanging nature of the Spurs franchise. I bring this up now because I am trying very hard not to take all that for granted. I'm trying to remember how rare that is, nearly unheard of. If you don't believe me, look no further than the Sacramento Kings. Ten years ago, the Kings were a whisker away from representing the West in the NBA Finals. They had a loaded roster, one of the best coaches in the business, raucous fans, fun-loving young owners. What more could a small market team want? The Kings were on the brink.

Being a Kings fan currently, it may be hard to remember those heady days. The team came very close to moving cities. The home games are not packed with sell-out crowds. Coaching and roster changes are frequent, wins not so much. But the fact is that this is more the norm than we would like to think in the world of small market franchises. The big boys will always have a magnetic draw for talent, deeper pockets, a brighter spotlight. Small market teams like the Spurs, Kings, Thunder, have to be smart, have to spend wisely, and have to be a little lucky, too. Reading through some of the posts over at our sister site Sactown Royalty, I know some of their fans are frustrated, but I also sense an awful lot of pride in their team, their history, and their future. They are still dreaming big over in Sacramento, and still giving their team a lot of love and loyalty. Here's to you, Sactown!

What can we expect from this Sacramento team tonight? For the season, the Kings have one of the worst records in the Western conference. They are a much better team at home, though, where they are above .500, and where they have earned 13 of their 17 wins. For the year, the Kings rank in the top ten in the league in both points per game and rebounds. They rank dead last in points allowed. Generally this team is a pretty dangerous offensive team, especially when they share the ball. Since coach Keith Smart took over the team in early January, the Kings have improved in this regard, and are overall putting a better product on the floor, although this is much more true on the offensive end; nobody is going to mistake this team for a defensive juggernaut. The other night their young star power forward DeMarcus Cousins scored 38 points against the Rockets in a game they lost in overtime. Cousins is averaging 21 points and 10 rebounds over his last ten games, and will present plenty of problems for the Spurs front line. The Kings' other potent offensive weapons include point guard Tyreke Evans, a big and speedy point man that loves to attack the paint with the dribble. Evans is averaging 18 points and 5 assists for the year. The Kings are pretty deep at guard, with players like Isaiah Thomas and Marcus Thornton making valuable contributions. In recent lineups, Coach Smart has gone with quite a bit of small ball, with Cousins as the only real big and with two point guards on the floor. Rookie Jimmer Fredette was all the rage on draft night last June, but he has yet to make much of a splash as an NBA player, his three point shot so far hasn't made the transition to the NBA game, and lately his playing time has dwindled. Recent small forward acquisition Terrence Williams has shown some promise in his first few games with the Kings, chipping in 10 points against the Rockets. The Kings rely a lot on their starters, who play a lot of minutes, and have not gotten consistent production from their bench; the Spurs' depth should really be evident in this game. 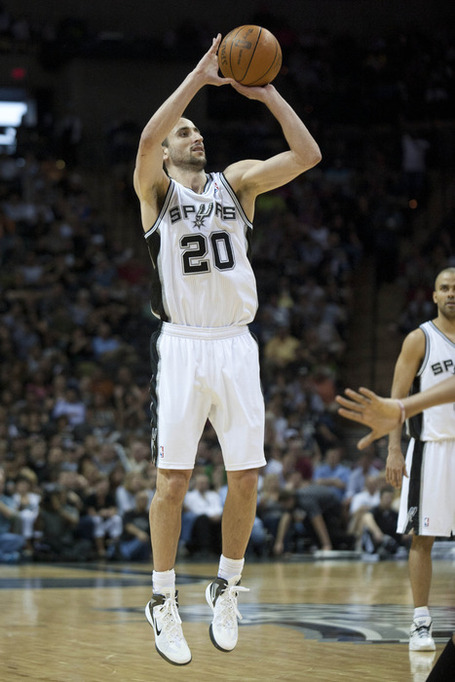 I have been keeping my eye on the rebounding column lately, and the Spurs have impressed over the last couple of weeks. I think that is a big key tonight, as the Kings are a solid rebounding team. The Spurs need to do a good job of controlling the boards, and need to exert some defense against these young Kings. If the Spurs can hold the Kings to 90 or so points and minimize second chance points, and if they aren't too worn out from the back-to-back on the road, the Spurs should come away with a victory.