Manu Ginobili's Game Is Changing Right Before Our Eyes

The evolution of Manu Ginobili's game is happening right now.

Share All sharing options for: Manu Ginobili's Game Is Changing Right Before Our Eyes

When the day is about to end, there are often beautiful things to see. Photographers and filmmakers refer to the 60 to 90 minutes before sunset as the Magic Hour, or Golden Hour. And there are some wonderful reasons why those are very appropriate names. Do yourself a favor sometime and do a Google image search for either of those terms and you'll be rewarded with some amazing images due to the play of light across items that the sun has been shining on all day.

I particularly enjoy the way that objects are highlighted when the light grazes across them and makes them stand out when they would usually just blend into the background. This special way of seeing things is only available for a short time before it's gone and darkness falls, and it's hard to say just when the light will fail. Darkness can be scary, because it often masks the unknown. And what we don't know can be a source of great fear.

But I am writing this to tell you that I believe I have seen the future, and from I that I can tell -- it is nothing to fear.

The 34-year-old shooting guard (34 being considered chronologically-challenged in the NBA) carefully brings the basketball past half court methodically, seemingly taunting the defense. Ten eyes are scanning his every move. His passing ability alone warrants the defense's undivided attention. Couple that with his quirky offensive game -- a game crafted with artifice, predicated on unique angles, balanced upon the threat of scoring from every part of the floor, his ambidextrous dribbling, and the ability to draw fouls continuously -- Manu Ginobili is still incredibly hard to stop despite having logged 652 games at the professional level (not counting his International experience).

With a 22.8 PER (2nd among shooting guards), Manu is enjoying yet another stellar season in his illustrious 10-year career, he's still a pick-and-roll savant as he has illustrated time and again, and he's playing at a high level even though he's missed huge chunks of the season to a broken hand and other maladies. He's shown what he's capable of in the few games he's played since returning from his latest setback.

The box score of Friday's Dallas game (11 pts, 7 reb, 7 ast, 2 stl) and Sunday's against the Sixers (11pts, 5 reb, 5 ast, 3 stl) and last night's contest in Phoenix (13 pts, 5 reb, 5 ast, 1 steal) are drifting from what he was producing in 2010-11, and I think they will become even more pronounced as the season wraps up. Will he be threatening to post a triple double every night? Maybe, maybe not, but these numbers point to the way I see him playing now that the Spurs are as deep and talented as they've ever been. He can still knock down any shot in any circumstance and take over a game if needed, but with the addition of Stephen Jackson, Boris Diaw and Patty Mills, on top of the emergence of Kawhi Leonard and Danny Green, Manu's game is morphing into its next phase: one that I think can extend his career and preserve his body.

With so many players on the team who are comfortable handling the ball, he's working without it more than at any time since he first joined San Antonio. In fact, his usage rate represents his lowest since his rookie year. I can stomach his turnovers because they are almost always productive -- turnovers that occur while trying to set up his teammates for easy scores. Manu rarely puts himself in unfavorable positions where he is forced to toss a crazy pass to save the possession. When he loses the ball, it's because he's looking to lead a cutting teammate past three defenders. That's what makes Manu ... well, Manu. He's fearless, and selfless. And he's had more success in this specific role than many poing guards, much less shooting guards. In nine games during March, he is averaging 5.9 assists in 24.9 minutes.

Manu has always been an underrated defender with long arms and he exhibits an arcane knowledge of passing angles. According to 82games.com, Manu has limited opposing shooting guards to 14.6 points per 48 minutes, 4.9 assists, 3.7 rebounds, 2.9 turnovers and an abnormally low 8.6 PER. Manu still is decidedly above-average defensively but now that a good portion of the scoring load is off his shoulders, he's able to allocate more energy towards defense. And when the Spurs have an engaged Manu, watch out. Some crazy stuff starts happening.

Can someone please tell me how in the world Manu knew to do that? I've watched this play over twenty times and I just can't see any clue that would allow Manu to predict that Nash and the ball would be at that point at that time. How could anyone do that? And even if there was some clue, he does it so smoothly that it looks like HE has been watching a replay of the play over and over until he's ready to make the steal. He takes off like he's shot out of a cannon and doesn't stop or pause until he dunks. And he starts moving for the steal before Nash even clears the screen!

Look, when Steve Nash is running an offense, he's as unpredictable as he is in control. He plays the game like he has the proverbial eyes in the back of his head -- even worse, like he's got 360 degree vision. With bird's eye perspective. He's not infallible, but he makes excellent decisions with the ball on such a consistent basis that it's a fact of life.

Yet Manu darts out, in the middle of Nash's drive as he's curling around a screen, and never even slows down the way a normal human would to accomplish the steal. It's more like he takes off running and picks the ball up off a chair. I've never seen anyone make such a steal before, and I can't remember when I've last seen a player so wide open from a play like this. No one even tries to follow him because he's too far away by the time anyone else's brain has caught up to what's just happened.

His efficiency is still elite

Because of his excellent free throw rate (which is down to a career low this year) and 3-point range (46.5 percent), Manu has always fared remarkably well in the true shooting percentage metric. For those that are not familiar, this statistic encapsulates a player's shooting percentage adjusted for every shot -- 2-pointers, 3-pointers and free throws. This year, Manu has made 66.4 percent of his shots good for No. 1 among shooting guards. But he's just not taking that many shots anymore because the other guys have gotten more comfortable with carrying more of the load in his absence. Manu is transitioning from carrying the team offensively with Tony Parker (as he did last year and at the beginning of this) to being the consummate shot creator and all-around threat.

Now the counter-argument here is that he's still rounding into shape after all the time he's had off this season to convalesce. A fair point, but that doesn't really explain it all for me. He's always been the Spur that took the longest to shake of the rust after a layoff, but he's been shooting well all season long. We can't argue that he's a half-step slower with the way he's been blowing past his man and dunking on people's heads. The eyeball test says he's healthy and playing like Manu.

Only he's not playing like the Manu we've known. He's evolving.

Change is a good thing

When last season began, it took a lot of adjusting to get somewhat comfortable with the idea of a Spurs team who didn't work the ball into the post a couple dozen times a game; to root for a team who was more capable on offense and defense. But look where the Spurs are after almost a couple season's of the new style. Tim Duncan hasn't looked this spry since '07 or '08. Tony's gotten so comfortable in attack mode that he can stay there for weeks at a time, while increasing his assists per game to eight, which counts as more than two over his career average, and more than one over his best year to date (2008-09). The team is starting to show signs of being elite on the defensive side again, and everyone on the team is seeing their territory shift, and it's due to maturity (TP) and age (TD) as much as it is to the current makeup of the team.

Manu has always been as attuned as any player can be to the ebb and flow of a game; ready and able to deliver what his team needs from him at any point. For me, the worst part about watching the '08 and '09 playoffs, was having the involuntary thought, "Ok, Manu needs to step up now," only to realize that he was in street clothes. If we can all agree that his sensitivity to where and how he needs to play is as advanced as it's always seemed to be, then it's a short trip to believing that we're seeing a metamorphosis in his game that will take him places we can only imagine. And that will take the team where it hasn't been in five long years -- into the Golden Hour, where the end of the day brings beauty, even as night closes in. 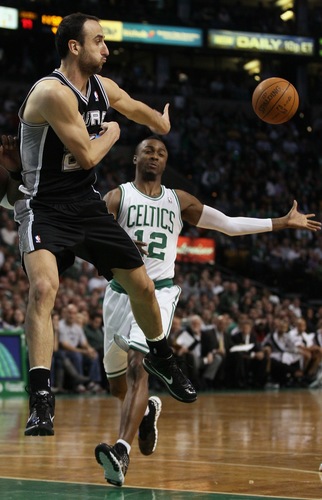