So the Spurs have reeled off 4 wins in a row, making them tied for the hottest team in the NBA, as of me writing this. The more impressive feat is getting three of those reeled wins in 3 nights. It was a display of a dominante and deep bench teaming up with a less than complete starting unit. Tonight the Spurs roll into the desert to take our old foes, the Suns. I miss the Suns and Spurs playoff battles, mostly because the Spurs won all but one. Let's take a look at tonight's game with some fun memories tossed in.

The Suns have been out of the playoff picture for most of the year. When I first started to review stats and standings and all the things one looks at when preparing a preview, I thought this should be a walk in the park game. The Suns aren't any good anymore, right? Well, they're not real good any more but they are only one game out of the playoffs. In fact, they are only 1 game out of the 7th seed. Phoenix is 7-3 in their last ten games (13-5 in their last 18) and appear to be playing some inspired basketball. When one takes a look at the stats, the Suns are remarkable average. They are slightly above average in offensive rating and slightly below average in defensive rating. They have a margin of victory that is close to zero and their record is 1 game above .500. So the question becomes are the stats or the record telling the truth?

What every happend to Steve Jabby?
via i19.photobucket.com

Well, my best guess is that the Suns somewhere in between their recent record and their season stats. I can't really see how a team that is lead in scoring by Gortat and Dudley is going to be really good. The Suns are 15-10 at home, much better than their 10-14 road record. If the Spurs can go to Arizona and play the way they've been playing over the last few games, I have a hard time envisioning anything other than a W. Besides, we don't want to allow the Suns to build up hope, do we? 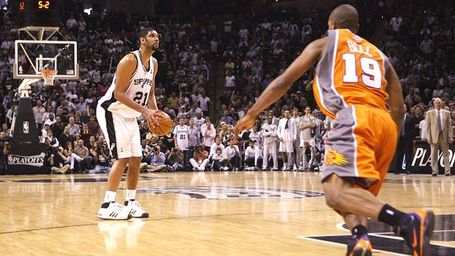 So money and he doesn't even know it...ok, he does know it.
via assets.espn.go.com

The Spurs have been straight rolling, they even have a former Sun on the team just to rub things in. Granted, he's been to Whataburger a few times since he last dressed in orange. Diaw has been a very nice signing since the Spurs picked him up. With Splitter missing games and Duncan having to rest the depth has been huge. One thing that's going a bit unnoticed is the Blair has been playing really well lately. I would hope that this is a sign that he's turned a corner and will be able to contribute more.

I'm not sure if all this new depth going to make a large difference when it comes playoff time, but it definitely paying dividends through this rough schedule. San Antonio will look to stay within two games of first place despite their best 3 players missing 35 combined games. That's amazing. I know some other teams have done ok missing their stars, but I can't think of a team that has had that much of their talent out that has been able to keep up the level of play that this Spurs team has done. It's a credit to Pop and the role players that have stepped in and played very well. 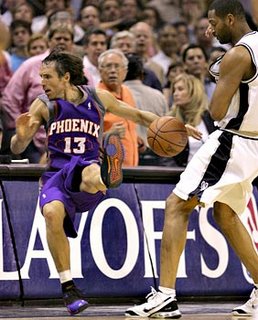 I've got to admit it, I'm a little bit sad to see the Suns a shell of their former selves. The glory days of 7 seconds or less was always a fun things to watch and even more fun when our boys in silver and black broke their hearts. Seriously, rivals are what makes sports great and it's a little bit bitter sweet to see a once bitter rival struggling. I will always have fond memoires of the Spurs and Suns playoff battles.

Stupid song of the day:

Lineups... accuracy is not guaranteed.

Game Prediction: Spurs should be able to match up with the Suns and handle their business easily. Spurs by 12. 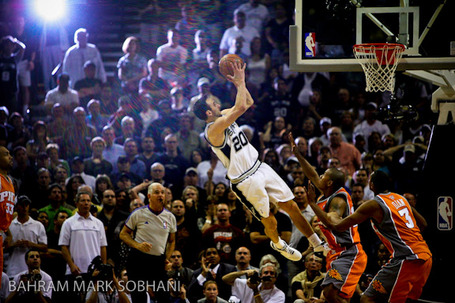