So, the Spurs won again. They did it with just two of the Big 3 in uniform. Again. They also did it without Tiago Splitter and Gary Neal. Again. And yet, the depth of this team continues to wear opponents out. But just for once, please, can San Antonio give us something else to talk about? At some point soon, can we discuss how the trio of Duncan, Parker and Ginobili is beginning to jell because of consistent court time together? In reality it's tough to find any reason to complain right now, but I just don't want to talk about the Duncan-less/Parker-less/Ginobili-less Spurs. Again.

But it really has been an impressive stretch recently. These were the types of scenarios Spurs fans never really imagined at the start of this season. The dreaded triple lindy (before I started writing for Pounding the Rock, I would have bet you money I would never type the phrase "dreaded triple lindy" in my life) was supposed to be an impossibility for a team that historically struggles on the SEGABABA (again, never thought I'd ... see above). But, with one member of the Big 3 resting each night, the Spurs pushed through three games in as many days - with a near hiccup in New Orleans - and finished the stretch with a 93-76 win against Philadelphia on Sunday. San Antonio (33-14) continues to solidify itself as the No. 2 seed and put pressure on first-place Oklahoma City (37-12).

With Duncan in street clothes because of, uh, old age (seriously, read the box score), Tony Parker had 21 points and seven assists as he continues to round back into pre-injury form, and DeJuan Blair was an absolute monster tonight with 19 points, six rebounds and three steals as he attacked with relentless energy, energy not expected after this many games in such a short time frame.

"Man, you know, I can go. Don't let these legs fool you ... the ACLs and all that," Blair said after what Pop called one of his best games of the season. "All I need is a couple hours of sleep and go right back at it.

"It's like 10 games in five days, at least that's what it feels like. It's just fun ... just playing (and) being with the fellas every day, all day and playing basketball," he continued. "That's what I love." 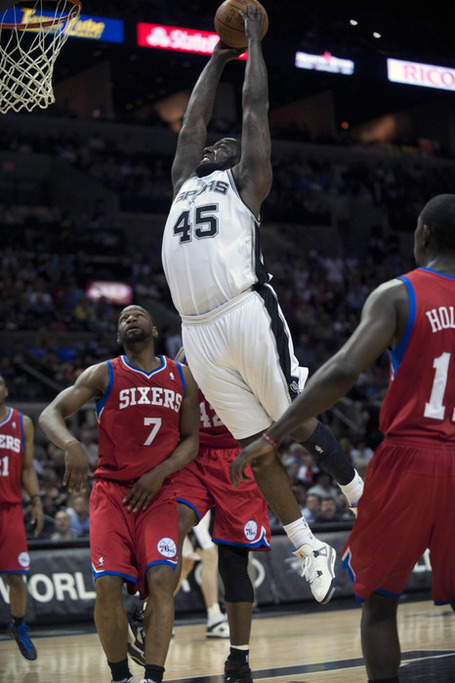 Once again, six Spurs were in double figures in this one (seriously, tell me when you've heard this story already) and showed off their well-balanced attack. It's funny how 93 points seems so low-scoring for a Spurs game these days, isn't it? Kawhi Leonard had the Spurs' only double-double with 11 points and 10 rebounds and Danny Green simply continues to play consistent basketball, hitting three shots from behind the arc and playing his always tight brand of defense on his way to 10 points and a couple of blocks.

For the second straight night, however, it hasn't been the high-octane Spurs offense pulling away from the opposition. They allowed just 76 points to the 76ers (heh) after giving up only 27 second-half points and 11 in the fourth quarter. San Antonio had a streak of eight straight games scoring 104 points or more prior to tip against New Orleans on Saturday night, but in the previous two games it's been the defense coming up huge. It's difficult not to win when your defense gives up only 76 points.

It's been an up-and-down season for the Spurs on the defensive side of the ball with an offense that is scary good at times. But on nights like these, when the legs are probably a little tired and the ball just isn't falling, having a stout defense is all important. Now, it must be stated the Hornets are one of the absolute worst offensive teams in the league and Philly is by no means a scoring juggernaut (29th and 23th, respectively, in terms of points per game). San Antonio should be able to slow these offensive "attacks." But don't count out the fact this game was played without the two biggest men on the roster. With no Duncan or Splitter there is barely a threat of having your shot blocked, so when a roster featuring a starting frontcourt of Matt Bonner and Blair plays this well defensively you have to give it credit. Regardless of circumstances, holding an NBA team to 27 second-half points and forcing 21 turnovers are impressive statistics.

And while there have been some poor defensive moments this season I think the stats are a bit misleading. The Spurs have played at a much faster pace over the last two years and clearly that leads to more possessions for the opposition, which generally leads to more points. In regard to field goal percentage, when a team pushes the ball and gets out in transition more often (which the Spurs have done), it sometimes translates to easier looks for the other team. When a game is played out in the open court, space is less occupied. When the flow of a game isn't getting clogged in the halfcourt, it results in easier looks for players. I'm not saying this team is even close to the defenses of the title run, but perhaps it's better than numbers suggest (the Spurs rank 14th out of 30 teams in defensive efficiency).

I'm imagining a scene where every afternoon when the Spurs arrive at the AT&T Center prior to a game, Gregg Popovich is waiting there with a handful of straws as he calls a particular group of players to his office. These players then draw straws to see who will be sitting the game out that night. It always ends with one or two players pleading their case while the "winners" laugh and run out the door, high-fiving one another on the way to their lockers. I mean, we're seeing several new looks every night. This depth has given Pop the convenience of being able to throw out different on-court combinations to gain familiarity for himself and the new players in town, and it's allowed the Spurs to manage any nagging injuries that might be causing problems as well. And on that note, it's been injuries that have allowed this team to realize its depth. Guys like Kawhi Leonard and Danny Green are getting a ton of court time and it's paying dividends, as each figure to be major contributors in the playoffs. But this team is still evolving. We still have yet to see what a full roster will be able to do once it has synced. This team can be better, and it's reasonable to expect it will be significantly so come the end of the regular season. 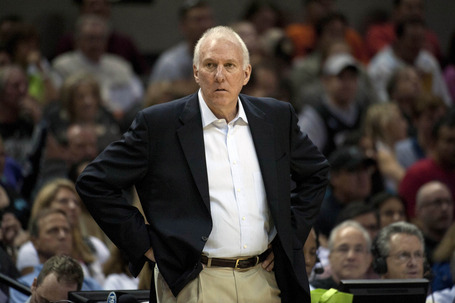 But as for an overall take on the game against Philly, there really isn't a whole lot that's changed in the last few days. The Spurs were too much for the 76ers and they took care of business against an inferior team. Injuries and moving pieces have prevented them from developing a consistent rotation and total system familiarity, but the overall skill level and basketball I.Q. this team possesses have prevented any kind of rut from forming. San Antonio just continues to win in whatever fashion they need with whatever roster they can use. The versatility of the lineup has been impressive, as each player has a unique skill set applicable to nearly every situation. The Spurs can go (decently) big or they can effectively go small. Their frontcourt is tremendously skilled in terms of passing, and a few bigs can step out and shoot from the perimeter. They have forwards that can defend, rebound and shoot and they have guards capable of getting in the paint all night. Pop will have no shortage of situational roster choices.

San Antonio will be a very difficult team to defend for 48 minutes a night going forward, and it seems like we're going to have a new story about a different player stepping up every night. But really, isn't that just the same old story? Hasn't that been what we've been talking about all this time?