As Spurs' depth grows, so do expectations

Share All sharing options for: As Spurs' depth grows, so do expectations

SAN ANTONIO - It's simply the nature of the human spirit. When the psyche is uncomfortable or unhappy it affects everything else from mental fortitude to physical health. All the pep talks, all the rally calls in the world sometimes mean nothing when everything around you is crumbling. For Stephen Jackson and Boris Diaw, nothing has mattered in recent years. From the importance of practice to the significance of games, very little has been a major concern in each player's basketball lives. But now they're playing for something different. Diaw is playing for something he's never felt and Jackson is searching for a way back to the greatest moment of his career. They're here to win a ring, and as of yesterday they've both found a way to join what is now the best team in the West.

It's almost blasphemous, right? To prematurely dethrone the Thunder, rightful heir to the Western Conference crown? The thing is, I saw the best team in the West last night. I saw the team that, if healthy (and that's one of the most important usages of the word 'if' you'll ever see), will win their conference. With the addition of Jackson (whose trade for Richard Jefferson was more underrated) and Diaw - not to mention Patty Mills, who's still working through Visa complications prior to his eventual return to the NBA from China - San Antonio has become one of, if not the deepest team in the league. On a night when the Spurs were without their team MVP in Tony Parker they found their way through yet another victory, 104 - 87, over the Dallas Mavericks on Friday night. Not only were they without Parker, but Splitter wasn't available either. Still, none of it mattered.

Danny Green scored 18 points, Tim Duncan had 15 and Matt Bonner pitched in 14 himself to lead a group of six Spurs who scored in double figures. It was a show of efficiency and fluidity that was surprising to see on an immediate basis in the aftermath of one of the most active deadline weeks we've seen in San Antonio. But what it really comes down to, there doesn't have to be some major adjustment period to a new system when the players you sign have a much higher than average basketball IQ. And while Jackson and Diaw have been toiling away on bad teams as they grow in age, there's no questioning their basketball smarts.

San Antonio, with both new players making significant contributions, used a 12-0 run at the end of the third quarter to pull away from the Mavericks, and once the offense found its rhythm there was no stopping it. The depth of the Spurs has become really impressive, and everywhere you looked on the floor there was somebody capable of scoring and defending at each position. Dallas didn't know where to go, who to guard. Six players in double figures with two more - DeJaun Blair and Gary Neal - at eight points apiece shows the type of balance San Antonio can now attack with. Again, Parker and Splitter did not play in this beatdown.

Diaw, the newest Spur, was thrown directly into the fire last night with Dirk Nowitzki the giant jump-shooting German in town. While his offensive game didn't awe anyone last night, his defense on Dirk Nowitzki was solid, if not great. For a guy not necessarily known for his defensive prowess, Diaw showed the Spurs what they'll potentially have come playoff time when the need for another big man arises. When asked about Diaw looking like he already had a pretty good idea of where he needed to be both offensively and defensively, Gregg Popovich offered this generous response. 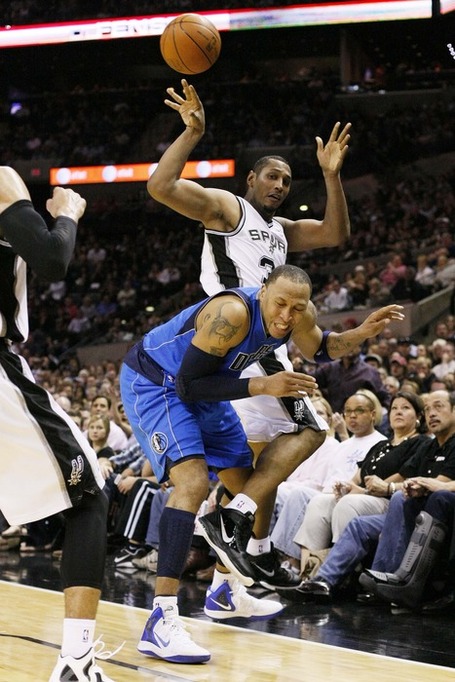 Diaw seemed re-energized in his first game as a Spur. Then again, after going from Charlotte to San Antonio, wouldn't you be?

But not only is he smart, he's long and very versatile. We saw moments last night where he exhibited both the great shooting and passing skills he possesses. And as San Antonio continues to add to the roster proven, skilled veterans, the biggest problems from last year's team that suffered that painful first-round loss seem to have been fixed. Not just fixed ... eradicated. It was easy to point to the big men Memphis had being the biggest issue in its matchup with the Spurs. While Zach Randolph, Marc Gasol and Darrell Arthur all had a really good series, it wasn't what ultimately decided San Antonio's fate. The Spurs front line, for all intents and purposes, held its own. While the scoring wasn't there - Duncan looked so physically hampered it seemed the end was coming sooner rather than later for him - the rebounding was as San Antonio actually outrebounded Memphis. The issue was on the perimeter, where the Grizzlies ate the Spurs' lunch.

The length, skill and athleticism Memphis possessed suffocated the Spurs guards, and the same small lineup - with George Hill at the shooting guard - that had so much regular-season success was rendered completely ineffective at times. I know Manu Ginobili was quite injured, but a lot of that had to do with Grizzlies' perimeter size. And the Spurs were a guard-oriented team last year, even to a fault. So when Memphis' athletic wings cut off dribble penetration, jumped passing lanes constantly and smothered the ball on every possession, San Antonio had no answer. Fast-forward to now, when we no longer see a lineup that features Hill guarding guys like Kobe Bryant and Ginobili or Gary Neal playing at the small forward spot. The 6-foot-2 Hill has been replaced by the 6-foot-7 (15 feet tall when his arms are extended upward) Kawhi Leonard, the 6-foot-6 Green has proven to be a very good NBA player on both sides of the ball, the 6-foot-8 Stephen Jackson came in exchange for Richard Jefferson and now the 6-foot-9 Boris Diaw arrives with the ability to play at least three positions. The Spurs have completely revamped their perimeter attack and it should pay dividends in crunch time. 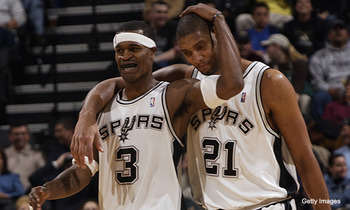 Hey, Jack. We're gettin' the gang back together. You in?

And as Popovich reminded the media outside the locker room this was just one game of many more, it is important to keep this in mind. San Antonio was energized and it jumped all over the visiting Mavericks. But both Pop and Duncan turned down questions about whether or not this game had playoff intensity, calling it just another regular-season game against Dallas. They're always competitive. They're always a bit more heated. But I think you have to take what they said with a small grain of salt, at least. While it's important for that locker room to keep a cool, collected head, the fans all around it have the right to lose theirs. This was an impressive win and perhaps the most entertaining game of the season. There's something about watching such thorough domination when you're missing your best player and your most improved player that excites the fan in you. It gives you hope in the sense this team will only get better. And with guys returning from injury (I'm getting tired of typing that phrase by the way) and new acquisitions familiarizing themselves with their new digs, the Spurs really can't go anywhere but up. With the eventual arrival of Patty Mills on the near horizon, this roster is as deep as it gets from one to 12. (My historical perspective doesn't go back all that far given my age, but I challenge anyone to present a deeper Spurs team in the franchise's history than this one.)

There is certainly still a long way to go - 22 games until the playoffs start - but there's a familiar feeling in the air. There's a quiet confidence growing in San Antonio that this team can be special. And though we've talked about the critical importance of health among the Spurs' big three, my concerns have been significantly lessened. This team is deep and very talented, and it's shown a tendency all season long to fall in line and step up when the guy in front goes down. There are a lot of moving parts that still need to be integrated, but those parts are smart and should grasp their responsibilities quickly.

The weather is getting warmer in San Antonio, and with it there's a buzz that continues to grow. That familiar playoff atmosphere is seeping in, and all these declarations and statements made over who the best teams are will have their validity tested at some point in the upcoming months. And, yes, there is still a long way to go, but that's a good thing. That just means there's that much more time for this team to improve. My gut feeling: we haven't seen anything yet. This team is just getting started. Think about it. How many games this season have featured a fully healthy lineup for an entire game? Like, 10, at the most? Let's just continue to watch, and with the second leg of the triple lindy coming in New Orleans tonight, we certainly won't be at a loss for the viewing opportunities.

But I'm saying it right now, there isn't a team in the West the Spurs can't beat in a series. In fact, I don't think there's a team in the conference I would pick to end San Antonio's season. And it's been a while for a town that's used to scheduling parades on the River Walk, but there's a really strong possibility there will be June basketball in the Alamo City. 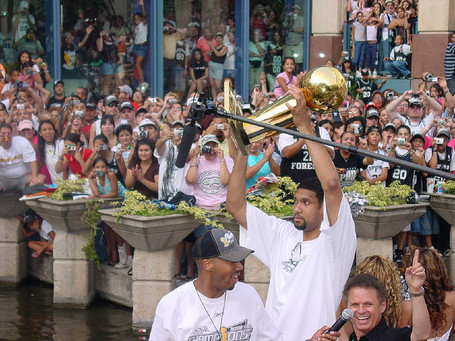 That seems like an obvious statement, doesn't it? After all, this is the best team in the West.