This Spurs Team Is Blowing My Mind

Share All sharing options for: This Spurs Team Is Blowing My Mind

It Seems The New Additions Are Working Out

I need to warn you: I don't know that I'm going to be able to be reasonable about this team right now. There probably won't be any statistics in this post. It's possible that I won't say a single rational thought in this entire story. What's more, I don't care about any of that one iota because this Spurs team is currently blowing my mind and I don't have the wherewithal to hide it. The last week's worth of games and deals, from the win over the Thunder, to the additions of Stephen Jackson and Boris Diaw, have me stupefied and nearly catatonic, so what follows might not be the most coherent thing I've ever written for PtR, but it's got to be the most excited.

Tonight against the Dallas Mavericks, watching the 4th quarter and the way that Green and Kawhi were defending out on the perimeter? That was insane. Capt. Jack and Boris really seem to have slid right into the mix in the middle of the season even as Manu comes back from injury and Tony Parker goes out with one. Yet in the midst of all this flux and turmoil and uncertainty, more smoothly than should be possible, they're fitting in, contributing and producing. While it's not like that was the Spurs' regular offense out there against the Mavs, it looked a lot like SfS's post from yesterday described -- the whole total football idea. Who's bringing the ball up the court this time? Is it Danny Green, or Jackson, or Manu? I don't care and they don't seem to mind who either. All the parts are seeming so interchangeable that you'd be hard pressed to tell a position from a role. So the only thing left to do is sit back and watch the other beautiful game. And it certainly was a thing to behold tonight. Starting with ...

I Love a Rookie

I can't express how much I love Kawhi's game. I'm really starting to believe that he's the future. And the way that Green and he complimented each other while defending out on the perimeter? That was insane. In the 2nd half, after the drought, the Spurs were scoring at will on a team that has honestly been playing really good defense this year. I know a lot of fans were calling for PATFO to add a legit big man, like Chris Kaman, and while that didn't happen, they did get bigger. Jax for D3-D4 (he can't really guard many 2's anymore) and Diaw for D3-D5. And now our small ball isn't so small anymore. Also, Jackson has som seriously quick hands. That play from the highlights of Wednesday's Timberwolves game where he's defending in the backcourt while everyone else was getting back on defense was just a physical feat.

And to think about how Pop must be in matchup heaven right now. He's got to be licking his chops every timeout he calls, just thinking about what he can draw up for the next inbounds play. This roster is just stocked with talent, up and down the line. If there's anything this group of guys will do (all who can get out and run) it's extend Manu's career. Putting him at the point for the 2nd unit no longer means that he's going to be the only one initiating the offense in the half court. He's going to be running a controlled break. I LOVE it when I see him after an defensive rebound, dribbling up the court with his body turned sideways, just waiting for the opening to whip a pass to a streaking Green or Leonard. It's sublime. I think I'm ready to see him step back from starting and be that 6th man extraordinaire once again. As deep as this team is right now, we don't need Manu to play the extra minutes that Tony did early in the season after Manu broke his hand.

Mrs. Wilco and I were watching the end of the game as the Spurs just pulled away, and I was GOING OFF as I told her about Kawhi over and over during his 6 straight points in the 4th. "He's just a rookie. He only played 2 years of college. Look at how he plays defense on Dirk. As he's being posted up, all he's using is his lower body, and his arms are out to his sides so the refs won't blow a whistle. And Dirk can't get any separation from him because you can't slam your shoulder into your defender's chest when his knee, thigh and hip are already pinned against your leg, taking away any base you need to maneuver."

The Dirk block to coast-to-coast layup Leonard executed had me hooting with joy just moments after I had asked the jrwlings to turn down Pucca: Ninjas Love Noodles. And Jason Kidd put his hand RIGHT ON the basketball as Kawhi was bringing it up to shoot (just like Serge Ibaka did on his baseline drive against the Thunder last Friday) and he just pushed right through it, and finished it as softly as you please. I was giddy. And going back to that dunk against OKC, watch it again and after he scores there's literally no change of expression. No acknowledgement of what he's done. There's just the play, and then running down the court to play defense again. I love his lack of pretense, his refusal to preen, chest thump and talk trash. There's just basketball play after exceptional basketball play. Man!

Kawhi Leonard Dunks It over Serge Ibaka (via NBAAddictz)

A Frenchman Joins the Cast

I haven't watched Boris much since he left the Suns, so I was impressed with his ability to survey the floor and pass out of the high post. It's not something we get to see very often except when Tim Duncan is posting up. I didn't know Boris had that kind of floor vision. Now it's true that Tiago's been doing a good amount of that this year too. It's just that while his pickenroll game is world class, his post game isn't quite NBA ready yet, and so he's not being featured in that high post very often to showcase his passing talents, but it'll come. Even if it's next year. Besides Splitter's rolling is phenomenal and his timing is impeccable. He seems to always know when he needs to hang in there a bit longer to finish the pick. And he knows precisely when to slip the screen and backpedal toward the basket for a pass. Earlier this week, Tony and Manu took turns running the pick and roll with him on the left and right side of the lane, and each threw him a lob that he finished. I was nearly agape at the ease with which they scored. It looked like San Antonio's version of lob city, only without the flash, since Tiago has about an 8 inch vertical. 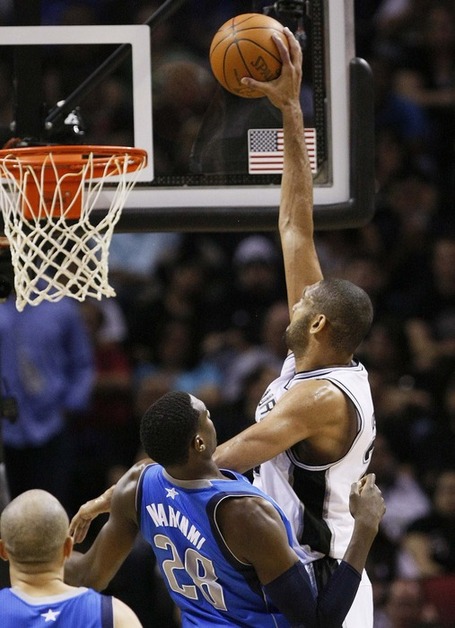 Now, CapHIll likes to joke that Tiago can jump higher than Timmeh. But I say that's not true. He can jump higher than Timmeh lets himself jump. I've become convinced that Duncan chooses to stay close to the floor after the double ankle sprains (what was it like two weeks apart?) at the end of the 2005 season. The other day, he was blocking shots by just getting up on his tiptoes, and then later in the game, when there was no one around him, he jumped quite high for a dunk. He's really conscious about who's around him, and he donesn't take chances with it because he knows one play isn't worth an injury. And Timmeh is looking stronger as the season goes on.

Yep, tonight was the night I'm going to remember as the moment the San Antonio defense really started to exert itself and look a bit like the famed days of yore (aka 2007). Only, instead of getting those rebounds and walking it slowly back up the floor, this team can run like crazy, and not just Tony and his OMFB. I'm simply falling in love with this team. Hey, I told you I was leaving rationality behind, and I am. I'm downright smitten with the upside of this year's Spurs. Yes, I'm infatuated by What Could Be.

Now, while I am beholden to what this team is, the potential for all of these ingredients (especially the new ones) to gel, and perhaps even become greater than the sum of their parts -- well it's just riveting. Even if this is the very best that they play this year, I can be satisfied, because I can actually look forward to next year with the expectation that the team can be better than it was this year. And when's the last time that Spurs fans could feel that way? 2004? Or 2006 maybe? Anyway, it's been a log time for me. 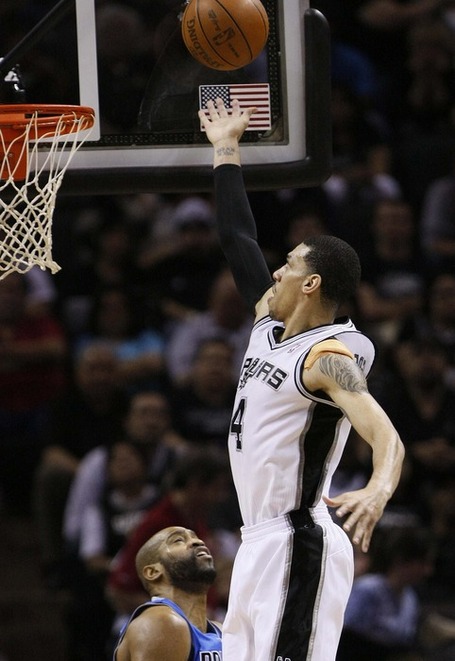 But when I look at all the guys who are contributing who weren't even on San Antonio's radar last year, much less actually donning the silver and black, it's quite a daunting list. Danny Green: raise your hand if you saw him contributing as much as he has on offense and defense, and leading the team in scoring this many times -- this was the third right? (oops I said no stats -- never mind that question). Kawhi Leonard: I've already glowed about him so much already here, but I can't help but be amazed over his maturity and his unflappable attitude. Stephen Jackson: the man is playing with some serious swedge right now, and it's fun to see that from someone in a Spurs jersey, especially with how little expression Leonard shows. They kind of have a fire & ice thing going on there. Boris Diaw. What can you say about a guy who's just played a single game, but since all I'm talking about here is potential, I'm comfortable saying that I'm extremely intrigued by what the Big Frenchman can do in a system that requires focus, defense, discipline and the ruthless pursuit of improvement.

Stay tuned, £ers, because it looks like this team is primed to put all the pieces together and make some serious noise here. And I can't wait to be around when it happens.