With the additions of Patty Mills and now Boris Diaw, the Spurs have reached the end of a yearly tradition where playoff-bound teams absorb the veterans shed by those headed for the lottery. They'll join Stephen Jackson as the acquisitions that actually get some minutes for once, as injuries and a weekend Triple Lindy press them into immediate service. Tonight they'll be thrown into the mix against the Hornets, who played spoiler at home against the Clippers on Thursday and Dallas at the beginning of March. I break down the pesky Hornets and how the new players might fit with the old below the fold.

We're used to seeing stats laid out for players, especially when we haven't seen the player in action for our team yet and there's nothing else to go on or write about. This is a player preview with a bit of a twist: the stats here are lineup versus lineup, a new toy recently introduced on the invaluable bk-ref.com. For example, FG% for Tony Parker below is the team's FG% while he's been on the court minus the opponents' while he's been on the court. Here's the Spurs in 2012:

Context is everything in these pages. Tim Duncan and Danny Green play mostly with Tony Parker, so their numbers look similar. Tim and Danny don't get to the line much themselves, but they're part of a unit that's excellent at getting FTs and not fouling on the other end. Tiago Splitter and Matt Bonner share the court and the same +/- stats, +10 overall and +.075% in 3 point percentage. It's impossible to precisely trace who is contributing what, but with these two it's not hard to say Matt takes care of the threes and Tiago the FT advantage.

Dejuan Blair has struggled this year: the team is -2 points per 100 possessions when he plays, but that's mostly against starters and without Manu there to space and pick and roll for the big guy. Kawhi Leonard is a true rookie, and even rookies on good teams usually seem to end up with a stinky +/-. You could spend all season getting to know these guys and who plays with who and you still wouldn't want to jump to conclusions about the bottom line. 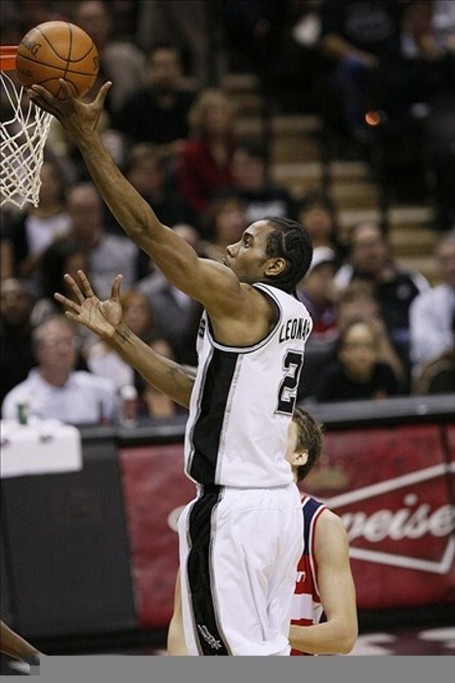 His +/- numbers may be average, but this is still one impressive rookie. cdn3.sbnation.com

The game today is, where do the new old guys fit in with what we have? Stephen Jackson seems like he belongs with Tim Duncan and some three-point shooters to keep the floor spaced when he has the ball. Neal might be the better fit than Kawhi, on the grounds that he's a more reliable shooter, although neither has played on great defensive lineups. His best hope for big playoff minutes is proving that he's a better defender than Leonard or Green and can make up for the threes lost at the free throw line.

I can't pretend to be an expert on Diaw or Patty Mills, who I knew almost nothing about before last week. I believe Diaw should get a chance to play with Tim and the starters, perhaps kicking off a third quarter. All year our starting group has lacked identity, getting by on Tony's offense and the defense from Duncan and the wings without excelling in any one area. With Richard Jefferson out and new blood on the way in, the Spurs have an opportunity to develop a defensive identity for the starting lineup to mix with the high-efficiency bench led by Splitter and Bonner. In the playoffs benches become less relevant and easy buckets disappear, but defense never goes out of style.

Preventing easy scores shouldn't be a problem tonight in New Orleans, against a team that can't shoot, can't get to the line, and has struggled to keep up with opposing starters all year. In their lineup vs. lineup table, their problems with getting 3 point and free throw attempts is obvious:

Any time you start a sentence with, "The core of Marco Belinelli, Jarrett Jack and Trevor Ariza", you know you're describing a team that's probably not making the playoffs in the West. Even so, this is a group that can and has beat playoff competition at home and with the right contributions from players like Kaman and Vasquez. On the road and with the rest disadvantage, the Spurs have a lot more to worry about tonight than just getting the new players acclimated.

I bet we'll know whether Tony Parker and Tiago Splitter will be playing by the afternoon. Although Manu recently spoke about minutes restrictions and being held out of back-to-back games, I imagine he'll play if Tony doesn't. Having Patty Mills run the point all night with help only from Gary Neal would be trial by fire for the poor guy.

Game Prediction: SPURS BY 11. As long as Manu or Tony is distributing the ball and as long as they're surrounded by three-point shooters, our new players should do fine and fit in right away. I predict the Spurs win by enough to save something for tomorrow night's back-to-back-to-back against Philly.