Tonight, The San Antonio Spurs look to start their first of six games in eight nights. The Dallas Mavericks come to town, having won the previous meeting six nights ago, 106-99. This will be a tough stretch for the Spurs, made even more difficult with a questionable Tony Parker, who experienced tightness in his hamstring in the game against the Minnesota Timberwolves. They were also without Matt Bonner, who was suffering from back spasms. On the plus side, Patty Mills will be a Spur soon, once his visa paperwork clears. Once he has cleared waivers on Friday, Boris Diaw might also join the team, after Tony pushed heavily for the Spurs to sign him.

Let's get this party started, after the jump!

The Dallas Mavericks come into this game having lost their previous game to the new look Los Angeles Lakers 109-93 in Dallas. They allowed The Lakers to shoot 58.4% from the field, including 9 three point shots (shooting 50%). They were also +17 in the rebounding department, with 7 players grabbing four or more rebounds.

The San Antonio Spurs enter this game coming off solid win against the Minnesota Timberwolves, capped off by a wonderful Bruce Bowen jersey retirement ceremony. Lost in some of the other big news was Stephen Jackson's homecoming game, and he did not disappoint with a 16 point effort on 6-9 shooting (3-4 from behind the arc). 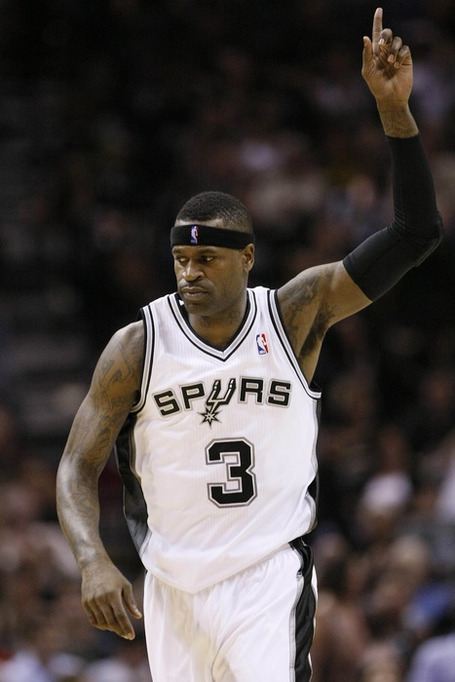 In their previous matchup, the Spurs were coming off a wonderful win against OKC, the previous night, and looked a step slow in Dallas. Rodrigue Beaubois had a really solid game, hurting the Spurs to the tune of 16 points on 50% shooting. The Spurs were also outrebounded by 13 and gave Dallas 11 three point shots on 45.8% shooting. That will not get it done against a Dallas team who is much improved on defense the past couple seasons.

If the Spurs can win the hustle stats and defend the arc better, they should fair well this time around with their home crowd. Although Parker and Bonner's status is uncertain, the team still looked fresh and energized on Wednesday. Also, now Jackson has had a chance to practice with the team to become more familiar with how the team now functions these days. This should be a good game for the Spurs if their heads are in it.

I predict that Dirk will have a big game. Without Parker, this will be a difficult game if Spurs give up too many easy baskets and rebounds. With Parker: win by 4. Without Parker, Bonner: lose by 2