State of the Spurs: Lineup Flexibility

Share All sharing options for: State of the Spurs: Lineup Flexibility

While it's still pretty early to jump to a conclusion, we're now three games out of the Richard Jefferson trade, and 2-1 in that time. I was having a conversation with JRW the night of the trade, and I pointed out one of the benefits of having Jackson instead of RJ. I'll fill you in on my theory, but first, hearken back, if you will, to the story by Edg5 regarding the positional revolution and what it means to the Spurs. Then, get ready for a brief sports history lesson and finally how that will relate to the rest of San Antonio's season.

I am convinced, now more than ever, that Pop's time working with Larry Brown taught him the value of stressing defense, and that Pop's time working with Don Nelson was spent learning the value of thinking aggressively outside the box-forcing matchups on your opponent and not reacting to theirs. If you remember the article from Edg5, you remember that it's not "positions" that are important, but "roles." While these roles are loosely related to the traditional positions, they don't always have to be. For example, Lebron James is not a "point guard" but he'd likely be considered one of the 10 best in the league if he was, because he's good at what point guards are good at (as well as a number of other things). Point guards create shots for themselves and others. That should be enough of a refresher. If it's not, take the time to go back and read the article- it's a good read regardless. 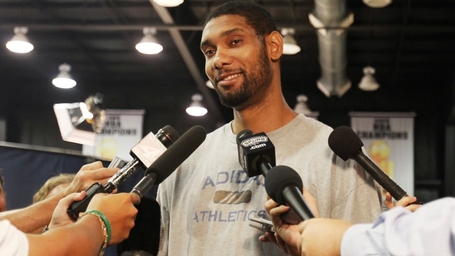 I've called you all here, today, to officially announce my retirement...from the Power Forward position.
From now on, I'm playing exclusively at point guard.

Now, "total football" (soccer) is a strategy developed (or at least made most successful) by the Dutch. Boiled down to its essence, it could be summed up: everyone except the goalie is interchangeable. In practice it's fairly simple to explain. If a defender moves forward to attack, a mid fielder drops back to help defend. If an attacker has to drop back to help out the defense, a midfielder or a defender is free to counter attack moving forward. It's a pretty simple idea- only the goalie has a fixed position, everyone else is supposed to move as a single unit. If you'd like to know more about the concept behind it, you can read the wiki here. Again, another good read. As a concept, I find this infinitely fascinating, because while it is nearly impossible to do, a team that can pull this off- whether a soccer club or a basketball team- would quite literally be playing differently from everyone else in the league. Applying this concept to basketball could do to the sport what Moneyball did to baseball. We're talking a huge, huge, stylistic change.

Now, back to the conversation with JRW. Jefferson, while "capable" of defending multiple positions, was really at his best covering SF's, and on offense he wasn't able to do much for the Spurs other than catch and shoot. He had a very, very narrow role on both ends of the court. Compare that to Kawhi Leonard, who has spent time on defense covering shooting guards, small forwards, and overgrown German power forwards. He's shown he's a capable (notice no quotations) defender from three traditional positions. D2-D4. Danny Green, while he lacks ideal size, is also capable of at least D2-D3, and if the opponent goes a little small, D4 as well. Stephen Jackson is a little bigger than Kawhi Leonard and in the two games he's played for the Spurs he's shown he can also guard at least D2-D4. Manu Ginobili, more of the same. On offense, all of the above have shown to be capable (if not ideal) creators, shooters, slashers, etc. Basically, the four of them are far and away the most versatile players on the Spurs roster. Aside from the excellent financial benefits of swapping Jefferson for Jackson, this move puts us a step closer to realizing a positional revolution.

Imagine if you will a lineup of Danny Green, Manu Ginobili, Kawhi Leonard, Stephen Jackson, and Tim Duncan. Or Tiago Splitter, or Dejuan Blair- the D5 spot is basically the same right now as the goalie. Any big body who can muscle people away from the basket will suffice. That lineup on offense has the floor completely spread with players who are just as good at shooting threes as they are at pump faking and driving. Every one of them can run a pick and roll and not only score for themselves, but create easy baskets for either the roller or another wing on the perimeter. Defensively, this lineup is a whirling dervish of energetic, aggressive, intelligent defenders. They are each capable of guarding 4 positions for a possession at a team, meaning that they can switch all screens (which is the easiest way to guard screens, if you've got the speed to switch positions). Manu and Jackson both give excellent help defense, and Danny and Kawhi are learning quick. A lineup featuring the four of them and Tim Duncan, I think, would be elite defensively, and on offense would cause absolute nightmares for every team in the league, except three. As Matt Bonner has shown throughout his career, if you can pull one of the opponents bigs away from the basket, it makes it much more difficult for the opposition to defend. If Matt Bonner drove to the basket like a Ferrari instead of a Grand Prix, it would be nearly impossible for the Andrew Bynums, Marc Gasols and Kendrick Perkins to stay on the floor. Even more mobile bigs, like Anthony Tolliver and Michael Beasley, would likely struggle. That's what you get on offense having Stephen Jackson and Kawhi Leonard out there instead of Dejuan Blair or Matt Bonner. On defense, Jackson is big enough and crafty enough to make the opposition work for their points, and the real hope is that the unit becomes so dominant offensively the other team has to make an adjustment of their own. This is different than what we've seen in basketball before. To my knowledge, few teams play four players capable of shooting, dribble penetrating, and passing at the same time. Most teams who have tried small ball, including the Spurs, attempt to have as many shooters on the court as possible. Don't underestimate the value of having extra players capable of both shooting and creating.

The three teams capable of making the adjustment? They happen to be the three championship favorites: the Chicago Bulls (who could counter with a Rose/Watson/Brewer/Deng/Noah lineup), the Miami Heat (who have a 5 man unit that would set historical records if they had the minutes to qualify, consists of: Wade/Miller/James/Bosh/Haslem) and the Oklahoma City Thunder (Westbrook/Harden/Sefolosha/Durant/Ibaka).

While this is more than likely a theoretical pipe dream of mine, I'd love to see the lineup (or similar variations with Tony Parker/Gary Neal in for Green). We've already seen both Kawhi Leonard and Stephen Jackson play well at the D4 slot. I would not be surprised to see more of it. While the prospect of "small ball" like this likely causes fear and loathing in San Antonio for many fans, know that this lineup has the ability to cause fear and loathing throughout most of the rest of the league, if for entirely different reasons.