Tonight the Spurs franchise honors one of its greatest, as they raise Bruce Bowen's number 12 into the AT&T Center rafters. Mrs. quincyscott and yours truly will be there in person on a rare date, the rareness of which you will only understand, dear reader, if you have very small children crawling around your home. We will enjoy this game and the ceremony, and try to resist calling the babysitter every fifteen minutes. For their part, the Minnesota Timberwolves would love to spoil those festivities, just as they did two days ago on the night Golden State chose to honor one of its greats, Chris Mullen. Not that Rick Adelman's team really needs any extra incentive to get up for this game. With a month or so left in the season, the Wolves are on the outside of the playoffs looking in, and every game becomes a must win for them. Having already won their first two games with the Spurs, and coming off a close victory Monday night, Minny should be both hungry and confident tonight.

The Timberwolves have only won two of their last seven, but the losses have been close ones. When these teams first squared off in early January, the T-Wolves shot 57% and scored 106. Four weeks later we held them to a mere 43% from the field and 87 points, although they still won. I'm sure Gregg Popovich will endeavor to repeat the better defensive effort of that January 27 meeting. Of course they have lost the electrifying Ricky Rubio for the season, but Luke Ridnour and J. J. Barea are both quality point guards, and have a knack for torching the Spurs, so I really don't expect them to suffer much offensively at the point. Tony Parker should have an advantage over either of these plucky guards when the Spurs have the ball.

But it's the front court that I'm sure most Spurs fans worry about when facing the Timberwolves, and with good reason. Kevin Love is a relentless and skilled big man who on any given night can score 20 points or grab 20 rebounds, or both. He wields brute force and a sweet shooter's touch in equal measure. And what a beard! His partner, Nikola Pekovic, may not have the subtleties of Love's game, but he is a muscular bruiser, and he is huge. Tonight will be another good test of just how far the Spurs front line has developed since last season, and either calm or excite the plaintive cries for Antonio McDyess to come out of retirement. 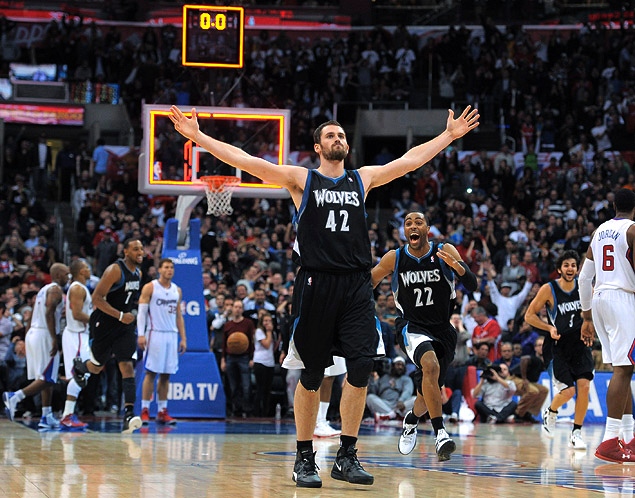 One measuring stick I will be keeping my eye on tonight is rebounding. In the first two meetings, the Timberwolves badly out-rebounded the Spurs. Getting dominated on the boards was one of the factors, along with poor free throw shooting, that sunk the Spurs a few days ago against Dallas, blunting the enthusiasm we all felt after whipping the Thunder front court the night before. If the Spurs can at least equalize the rebounding stat against Minnesota, that will go a long way towards minimizing the damage Love and company can do.

Which Spur team will we see tonight? The sharp, relentless squad that beat OKC? Or the possibly weary, possibly unfocused, possibly struggling-to-fit-new-pieces-in one that lost to Dallas? I don't know that Minnesota is nearly as good as either the Mavs or Thunder, but I think the Spurs are going to have to get back in sync and play both efficiently and passionately to get a win. The heart of the T-Wolves is Kevin Love. He is one of those guys that I kind of hate, but that's mainly because he ain't on my team. If he were a Spur, I might buy his jersey. Kevin Love plays the game the way it should be played, with passion. His team takes that lead. Minny also has a fine coach in Rick Adelman, a head to go with their heart. This should be a good one.

Game Prediction: I predict that I will give the babysitter a call or two, that I will shed a tear or two as Bowen's number 12 gets raised, and that the Spurs win by a point or two.