Advanced Statistics Can Be Your Friend: A True Story

Share All sharing options for: Advanced Statistics Can Be Your Friend: A True Story 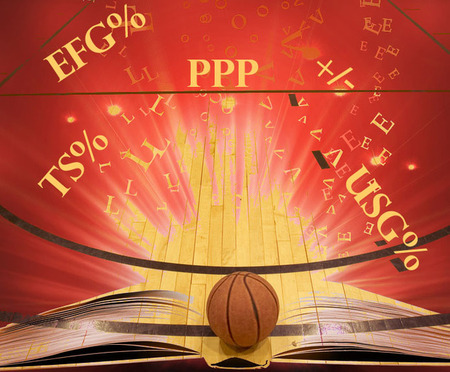 For a few years now, advanced statistics have become a huge part of sports analysis. It's almost impossible to find a respected professional writer who doesn't use them as a tool and some teams, like the Spurs, have used them for years now. The statistical revolution that started in baseball has finally reached the NBA mainstream and is here to stay.

The problem for someone like me who a) hates math and anything that involves numbers, and b) is still learning about the game of basketball, is that focusing on stats beyond the ones on a traditional box score seemed like a pretty daunting task. So I approached advanced stats first with skepticism and then with mild curiosity only to find that I've been missing out in what is now one of my favorite tools for analyzing the game of basketball.

I first thought of witting this a couple of weeks ago but never got around to it and Harwood Paroxysm did something similar but much more in-depth. You should really check that out. I decided that maybe a lot of Pounders might not have seen it, so I decided to write about it anyway. You may also want to read this great advanced stats primer by Evanz from GSoM, from which I got the image that accompanies this post. The examples I provide are just that, examples; things that caught my eye while I was writing this.

I should repeat once again that I'm far from an expert of any kind in statistics, just a fan that was looking for better ways to understand the game. I always read the formulas used to derive the stats, but I only understand half of them and I'd never dream of calculating stats on my own or developing new stats. Thankfully, there are a lot of fantastic sites available for people that like me, seek to improve their knowledge of the sport but lack the time, the smarts or the interest to devote themselves to finding new objective ways to measure and explain what actually goes on in a game.

This article aims to explain some of the stats and what they mean but more than anything, direct you to helpful sites that have an enormous amount of useful information you can peruse to help you crush the people who disagree with you expand your basketball mind.

The first site I started checking regularly was Basketball-Reference and I think it's probably the best one for newbies to start with. Basketball-Reference offers a lot of information, from traditional and advanced box scores to league leaders in every category you can think of. There's information about team and player statistics both advanced and raw.

Looking at the Spurs 2011-2012 page you'll find the roster, raw stats on both the team and the opponents, total, per game and per 36 player stats and finally advanced stats. While field goal percentage and rebounds per game are self-explanatory, most of us are not that familiar with advanced stats like effective filed goal percentage or total rebound percentage. What those do is go a step further than simple stats; eFG% for example adjust for the fact that 3-point filed goals are worth more than 2-pointers and total rebound percentage provides an estimate of the percentage of rebounds available that a player grabbed while on the floor. Those stats allow us to see that a guy like Matt Bonner, who is right around the league average in FG% is well above it in eFG%, meaning that Matty is much more efficient offensive player than we would have thought, since most of his filed goals come form beyond the 3 point line.

Stats like offensive, defensive and total rebound percentages give us a much better understanding of what kind of rebounds a player gets. Tim Duncan leads the team in TRB% even though his ORB% is a measly 6.9% compared to DeJuan Blair's 14.4. That is caused by Duncan grabbing the second best percentage of defensive rebounds in the league at a whopping 28.8% while DeJuan's 16.9% is not only behind Tim in that category but also Tiago Splitter's (20.8) and pretty close to Kawhi Leonard's (16.2).

There are a lot of other stats to browse through and the great thing is, Basketball Reference, like most stat sites, offers a brief explanation of what they mean when you mouse over the stat column header. There's also a glossary available and in depth explanations on the mathematical formulas used to derive the stats. I'll leave other tools like Shot Finder, Head to Head Finder and stuff like that for another time, if people are interested.

For all of its awesomeness, Basketball-Reference doesn't offer one thing that is really interesting to analyze: shot location. Fortunately, that's were Hoopdata comes in. This site, a member of ESPN's True Hoop network, provides information on the amount of shot attempts from different parts of the floor as well as percentages and league averages to which to compare them to. In a recent post, someone commented they heard Dirk Nowitzki was actually a better shooter the further he got from the basket. As counter-intuitive as it may sound, a quick trip to Hoopdata showed that it was true: Dirk ranks 9th in the league from 16-23 feet among players playing 20 minutes or more, while taking significantly more shots from that range that the 8 players above him and shoots a better percentage from there than from anywhere in the floor besides at the rim, where he shoots around the league average.

Another fantastic feature of Hoopdata's shot location charts is that it shows what percentage of made shots were assisted. That allows us to know that while 100% of Matt Bonner's and Kawhi Leonard's 3 pointers were assisted, that's true for only 59.6 of Neal's makes. Neal is shooting a shade under 40% from 3 while pulling up off the dribble for over 40% of his shots, which might explain why Pop has given Neal a longer leash even when, from time to time, he jacks up an ill-advised shot or three. 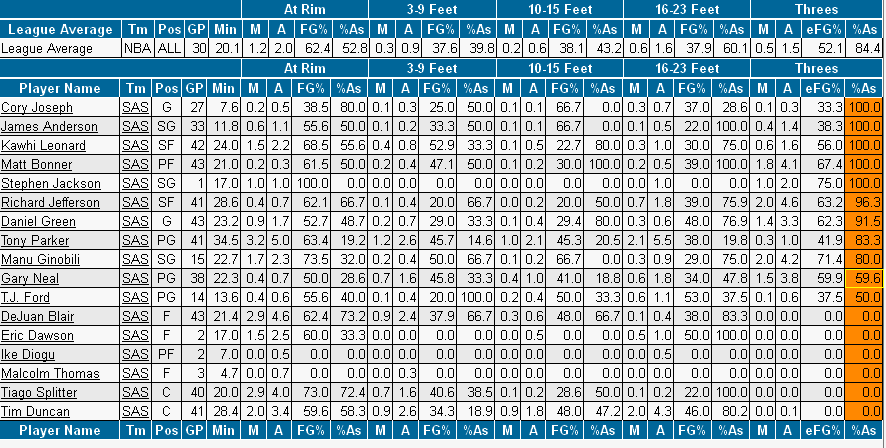 Hoopdata offers a variety of other really useful tools, like what type of shot an assist led to, but since this is only an introductory post I won't get into detail about them. You can find them on your own if you are interested.

The third site that comprises my top 3 is 82games. This site allows us to, among other things, look at two things that are important when discussing the team as a whole: top five-man units and production by position. I've already written about how production by position shows that our instincts might be wrong when discussing in which position a player is at his best, so I'll focus instead on top five-man units and their usefulness determining which combinations of players are good together. 82games not only lets us see what units have been on the floor together the most, but also how those units fared against opponents. There is information of plus/minus and points scored and allowed per possession and a more detailed breakdown on what percentage of shots the team took and allowed from close range and the eFG% of the team and the opponent. The lineup of Parker-Neal-Green-Bonner-Splitter, for example, has the best percentage of close range shots taken and the least amount allowed of the top ten most used units while shooting the best eFG% percentage of all units and allowing one of the lowest opponent eFG%. That unit takes close range shots and shoots the 3 well, without turning the ball over more than the opponents. 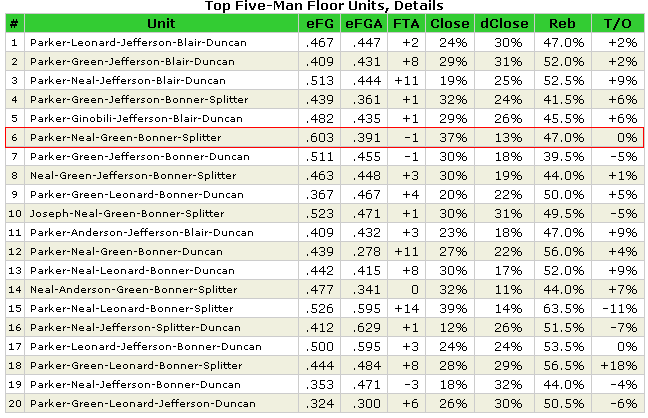 I can see why knowing that might not be interesting to some people or that someone might say that it's not a surprise that a unit that has Neal and Bonner, great outside shooters, and Tiago and Parker who score mostly in the paint does great in those areas, but for every time we find that stats simply tell us something that we already knew, there are two findings that challenge our commonly held beliefs. For some, that is hard to take; for me it's awesome!

Does this mean that we can know all there is to know about the Spurs and basketball in general just by looking at some numbers? Of course not. Watching games is still the most important, not to mention fun, way to learn about the team, but to ignore such a fantastic tool like advanced stats for a "I trust what I see more than what a geek says" approach or to reply to someone quoting stats with an angry "watch the games!" is just as silly as saying that Durant was one of the worst players of the 2009 season just because his plus/minus was awful. Stats can be misleading (especially defensive stats) sure, if we take them out of context.

A balance can be struck between what our eyes tell us and what the numbers do. In limited minutes, the Duncan-Splitter front court has been awful; that doesn't mean I don't think it can work in some cases. Like I said, context is everything and one of the best ways to put stats in perspective is to actually watch the games and follow the team through places like PtR.

The point of this post is not to turn PtR into one of those blogs where every single thing someone says has to be backed up by a stat or to criticize people that simply enjoy watching the game; the point of this post is to tell people that advanced stats are nothing to feel scared about and hopefully elevate the level of discourse even higher than it is now. Hopefully people that, like me, weren't so sure about stats give them another chance and the people that actually like them feel encouraged to keep sharing their interesting findings with the rest of us who are just getting into them.

So go ahead and jump into those sites and start working on a way to prove irrefutably that Matt Bonner sucks. There's a lot more to explore on those places. If you already knew about those sites or you like to keep looking through a bunch of numbers, other great stats sites include Basketball Value, which offers more in depth analysis of team units and plus/minus, Popcorn Machine, which tracks the game flow and NBAStuffer which, just like Popcorn Machine, I hadn't actually explored that much myself but seems interesting. I'll be looking through them myself, trying to find a stat that elusive stat that proves to the world what I already know: Manu Ginobili is awesome.