State of the Spurs: The Backup Plan

Share All sharing options for: State of the Spurs: The Backup Plan

I'm not sure how all the particulars will work out between the other two teams, but it's been rumored that the Magic are pursuing Monta Ellis to pair with Dwight Howard. Golden State, over the previous two or three years, has alternately placed Ellis on the block then taken him off. So it's not out of the realm of possibility for the two to work something out, even though the Magic, outside of Dwight Howard, don't really have much the Warriors would want. I'm not sure exactly what those two teams come up with, and this is just a guess on my part, but the salaries work and considering the draft picks the talent exchange ends up close to even. Regardless of what the Magic and Warriors agree to (if they agree on anything) PATFO should try to sneak in and try something like this:

4. Orlando's first round pick from this year and second rounder from next year.

Why do the Spurs get involved? Well, that's easy. Our lack of a fifth big is well documented. For those of you who don't know Earl Clark, he's nothing outstanding. But he is 6'10 and mobile defensively. He's not getting many minutes for Orlando this season primarily because of the emergence of the results of genetic experimentation of Matt Bonner and Brad Miller aka Ryan Anderson. Last year, though, he came off the bench for Orlando and played pretty solid defense. He can't do much on offense, but that's not what we'd need him for. He's cheap, could play 10-15 minutes a game paired with any of our bigs, and can guard the SF or PF positions effectively. 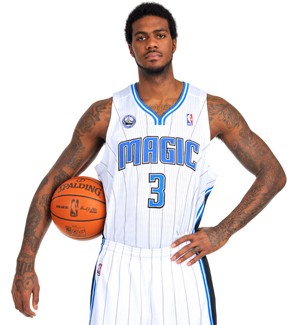 He was drafted by Steve Kerr while he ran the Phoenix Suns and was traded to Orlando as part of the Vince Carter deal. Like I said- it's not likely he's going to end up a key rotation player. But this is the type of trade that the Spurs are capable of getting in on. Losing James Anderson isn't going to be great, especially for what we'd get back. But since we didn't pick up his option and it's been reported that he (or his agent) want a trade, this could work out for all parties involved. Anderson is probably more talented, but he's our 6th wing off the bench and we probably shouldn't expect to get a drastic amount in return.

I don't often put on the armchair GM hat (it's not something I'm comfortable doing), but I liked this idea because it gives us depth where we need it without costing us anything significant.