The Spurs are coming off of their second home loss of the year. It wasn't the worst game every, but it was clear that the long rest, while probably good in the long run, caused some rust in the Spurs play. One cannot usually beat teams like the Bulls with rusty play. However, there's something to cure that little problem, it's called playing the Bobcats, or as I prefer: the Robertcats.

Charlotte is bad. Very bad. They have a whopping 4 wins on the year. Despite all of that you don't hear much about Michael Jordan being a terrible GM/Owner. I have often wondered why Jordan was always above the criticism that most other humans would have to endure, but that's for another time. Not too long ago the Robertcats were in the playoffs. There was hope that the Carolina's might get some quality professional basketball that they hadn't seen since the glory days of Alonzo Morning, Kendall Gill and Larry "Grandmama" Johnson.

Alas, it was not to be. The Robertcats got bounced out of the post-season via a sweep by the Magic in the first round of the playoffs in 2010. The next year, which was last season, Larry Brown quit / got fired after a 9-19 start. It's not compeletly surprising that they haven't been good this year. Here's a list of a few players that were on that playoff team that currently ply their trade elsewhere: Stephen Jackson, Tyson Chandler, Raymond Felton, Gerald Wallace and Raja Bell. Four of those guys were top 5 leading scorers for the team. Now days the leading scorer is Gerald Henderson. Ouch. 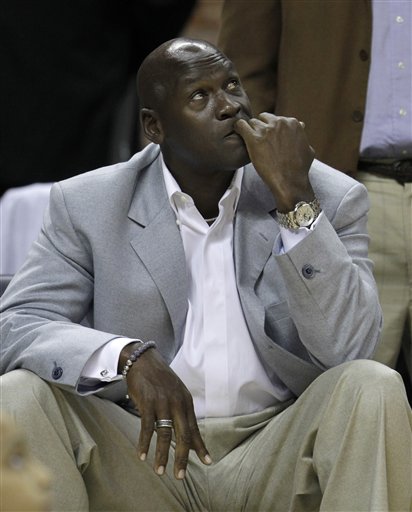 Sure looks like he's not really paying attention, no?

Needless to say the Spurs should not lose this game. If they somehow manage to have a gaff so enormous that they cannot beat Charlotte at home, I expect Pop's face would at some point be a shade of red commonly known as candy apple and his head might qualify as an explosive. I think it's a bit unfair the Miami gets to play this team 3 or 4 times. Those would be perfect opportunities for Pop to rest Duncan, Parker and Ginobili, but no we get stuck with a NOOCH team that fights tooth and nail. Stupid Eastern Conference.

Here are some quick stats to show you why the Spurs should win easily: the Robertcats are last in scoring, they are 28th in rebounding, and they are third worst in points allowed. Their defensive rating is next to last and their offensive rating is dead last. Their best stats are remarkably mediocre. I do not envy the fans of this team. I don't know what their GM or owner is thinking and frankly if they don't get the #1 pick in the draft (assuming there's a franchise guy there to take) the next few years look bleak in the Carolinas.

Song of the day:

A quick note on the Spurs health: Manu is a game time decision tonight. Leonard is likely out. And Danny Green should be good to go. On to the lineups as they might be:

Game Prediction: Spurs in a blowout.