And here's the one you were likely waiting for after reading yesterday's part 1 on the Eastern Conference. Instead of spending time on some witty rejoinder tying The Rock (sorry, it's Dwayne Johnson now, isn't it) Seann William Scott (what's with the extra "n"?) and a nearly 10 year old mediocre action flick, I'll get right to it, if that's alright with you. And if it's not, feel free to use the comments to decide whether Dwayne represents San Antonio, or whether Seann is a better stand in for the Spurs. Also, who it is that's tangling with our team -- is it OKC, DAL, LAL? 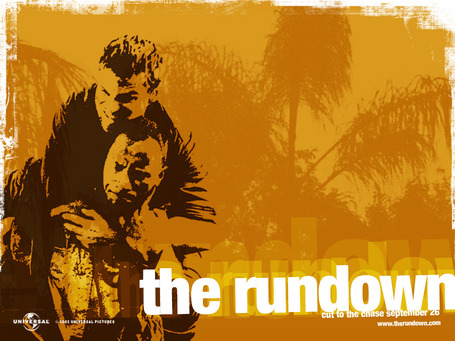 The Nuggets have since then bought out Turiaf's contract -- who, coincidentally, is a possibility for the Spurs -- so this trade is virtually Nene for McGee. I like the deal because the Nuggets get a cheaper contract for a player that has the possibility of exceeding his monetary value (if they were to re-sign him) and rids them of the potentially terrible back end of Nene's contract. I like the Nuggets team a lot and they are an exciting bunch to pull for. But if they draw the Spurs or Thunder in the 1st round, I don't think they'll be able to upset anyone. They won't go down without some excitement, though.

The Warriors are tanking. They acquired the best player (Bogut) in both deals so that's good. They managed to offload Jack's contract and finally had space to ... wait, they traded for RJ who will cost $11 million more. Doesn't help that he duplicates their incumbent small forward's production. Now, considering the Stephen Curry extension is on the horizon, the Warriors will be capped out with their current core. I don't foresee this as a good thing.

With this deal, the Rockets didn't hamper their future plans but didn't get worse either. Flynn, Hill and Thabeet were not going to get any meaningful minutes on this team. Camby is an elite rebounder/shot blocker. That very skill set gives them a tough defensive combo of Samuel Dalembert and Camby. The Rockets are an average team defensively and they allow a lot of attempts at the rim. Maybe the luxury of playing a dominant shot blocker at all times is the driving force behind this deal. Though the Rockets wouldn't like that grouping offensively in the slightest.

The Rockets don't have the talent the Spurs do (or the length to hurt us defensively) but they did improve. As a fringe playoff team, when you do that without shooting yourself in the salary cap, it's a nice deal.

If the Clippers managed to turn Cook (0.1 PER, .224 FG%) into anything more than a pair of nice socks, I would've been genuinely surprised.

Now you can imagine my surprise when they turned him into Young without altering the complexion of their team. After Chauncey Billups' season ending injury (torn achilles tendon), the Clippers were in need of someone to man the SG with some relative success. Chauncey posted a 17.6 PER at the 2 with above average percentages so his exact production would be tough to replicate without gutting their team. Young isn't going to bring the same professional attitude or will he compliment superstart duo Blake Griffin and Chris Paul as seamlessly as Billups did. Young takes a lot of mid range jumpers (7.1 shots from 16-23 feet, only Kobe Bryant, Ben Gordon and Richard Hamilton shoot more frequently) and isn't a great defender. His shots mostly occur after the catch so turnovers won't be a pressing issue, it's more of a shot selection/usage issue, and with Paul running the show, he may not have the opportunity to shoot the Clips out their games.

Whether Young fits into the offense or not, the trade will probably help the Clippers a lot. Their potential is just tantalizing. Part of me thinks they won't be mentally capable of making a deep run in the playoffs but their talent could mitigate their lack of experinece. Athletically they are definitely gifted. We'll see if they have enough moxie to succeed.

The Lakers made out really well this trading deadline. They managed to flip an aging point guard, a perennial wink link and his poor contract and a late 20s first round pick for players that fill legitimate needs and provide them with better depth to contend in the balanced, yet uncertain, Western Conference. Aside from Kobe, Andrew Bynum and Pau Gasol no other Laker had an above-average PER. Their "bench", in all honesty, was one of the worst in the NBA. For an aspiring contender, that lack of depth could not bode well for their success in a condensed season (remember there will definitlely be back-to-backs in the first round of the playoffs this year, and possibly the second rounds too). If their depth wasn't such a detriment, Kobe wouldn't be pressed into 38.3 minutes per game in his 15th season.

Not only did they acquire depth (both Sessions and Hill have above-average PER's this year) but they will give Bynum and Gasol a reprieve and rid the Lakers of of 24.6 minutes of the ineffective Steve Blake. There is some doubt, though, that Sessions is actually a poor fit for a team so reliant on Kobe's one-on-one ability. Sessions is a point guard that relies on pick-and-rolls and, therefore, needs the ball to succeed. He won't be content to toil away on the perimeter while the Lakers run their crunch time offense (I use this loosely, the Lakers essentially abandon all semblance of productive offense in the 4th quarter).

Still his mere presence should be a plus. The Lakers are currently the No. 3 seed in the Western Conference and they got there without a bench. The are only two games back of the Spurs and, should they meet in the second round, could be a rather difficult matchup. Before the deadline, they were an aging, flawed team with only one advantage -- Bynum and Gasol. Now they have elevated themselves into a potential finals contender. The previous sentence was not my favorite I've ever had to write, and this one isn't much higher on the list.

This move hurts Memphis' depth. Young was a gritty small forward that played tough defense in his limutes. Other than that, Memphis didn't lose much. Now that Zach Randolph is back they will be a better team (awesome analysis there, right?) than they've been lately. Although they have lost Darrell Arthur and Shane Battier from last year's playoffs, I'm still a little wary of playing them in a series. For some reason, their play seems to elevate (Mike Conley LOVES playing us) and Marc Gasol and Randolph are still going to log a ton of minutes. I think we can take them, assuming everyone is healthy, but I'm not going to call it a lock by any means.

Oklahoma City Thunder did nothing.

This isn't necessarily a bad thing after all. As currently constructed, the Thunder are already good enough to win a title. Their core is young and they seem to be winning the right way. That being said, after the moves that the Spurs have made and the success we've had against OKC, I'm feeling increasingly confident of the Spurs beating them in a playoff series. It's a very real possibility.

Hooray for tanking! In all seriousness, their trades can safely remove Portland's name among the playoff contenders. The good thing is that they will have more space to sign one of my favorite players, Nicolas Batum. Hooray!

I'm not going to provide more analysis of the Jackson-RJ trade. J.R. Wilco, silverandblack_davis, Spursfansteve and Edg5 have covered all the pertinent angles and have given ample consideration to the merits and risks of the deal. I won't do that. I'll just say that I'm in favor of the deal -- for reasons that have been already discussed - - and I am more confident about my team's potential to win a title than I was last week. Of course, without the benefit of highsight, we'll just have to wait and see.

To put it simply, the Thunder didn't improve, the Spurs (in my opinion) have gotten better, the Clippers and Lakers have filled pertinent needs and have improved their championship standing. Memphis gained Z-Bo, Denver lost some BBIQ, but still remain interesting, and Houston improved their interior defense. I still remain pretty confident in our deep roster that has gained some positional flexibility. (I really hope Jack can guard 4s effectively). The playoffs should be a lot of fun and the West will be very interesting. I'm ready, are you?