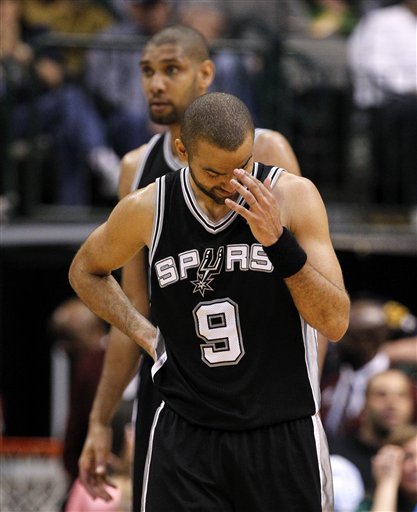 Coming out alive and triumphant after an epic showdown with the Western Conference-leading Oklahoma City Thunder, the San Antonio Spurs weren't going to get any respite soon, flying from OKC straight to Dallas to take on their bitter rival, the Dallas Mavericks. It was the third meeting of the season between the two teams, and as with any rivalry game between the two Texas giants, it was intense, physical, exhilarating, unpredictable, and filled with ebbs and flows that are staples of such heated battles. In the end, however, it was reigning Finals MVP Dirk Nowitzki who towed the Mavs to victory, raining jumpers over seemingly every Spur thrown his way en route to 27 points.

The SEGABABA-drained Spurs, for their part, played a good foil the entire game but seemingly could not get closer than arm's length as evidenced by the struggles of MVP candidate Tony Parker, who labored for his 13 points on 5-12 shooting and an uncharacteristic 3-7 from the charity stripe. To be fair, Parker still managed to get his teammates involved extremely well, dishing out 11 assists with only a single turnover. The debut of Spurs returnee Stephen Jackson was relatively uneventful as he scored 5 points in 16 limited minutes, although he did end up with the highest +/- of the team with a +11, and had his share of good moments defending Nowitzki.

These past few days, majority of the noise in sports have been tilting to the ongoing March Madness tournament, and it's a pity that attention has veered away from some quality NBA games being played, including this one between two teams with a long history of bad blood. While the NCAA games have flourished under the guise of unpredictability, youthful exuberance, and male versions of Cinderellas shouting their lungs out at every upset opportunity, the NBA, during these months, is juxtaposed as a league that thrives on boring organization, emphasizing preparedness, controlled movement, and seemingly endless repetition befitting a 66-game (for this year, at least) season grind. It also probably doesn't help the professional league steal away some of the limelight from college kids when Dallas and San Antonio are playing each other, as both squads are known for exquisite execution and almost mechanical teamwork, both of which were on full display Saturday night. 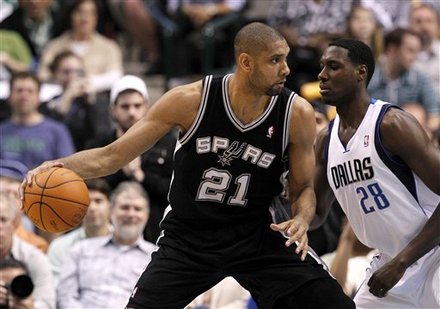 Most of the time, watching live, you don't really get to observe ominous signs about how the game will turn out to be, and this is a rather weak consolation provided by viewing the game on replay. Talking about the loss in his post-game interview, Gregg Popovich mentioned "Dallas was the sharper team. … We were a half-step behind from the start of the night defensively and they took advantage," and you can see this early on. In fact, the foreboding step-behind Spurs already manifested in the very first play of the game, when Danny Green and DeJuan Blair were beaten by Roddy Beaubois streaking skyward for a backdoor alley oop slam off a gorgeous Jason Kidd lob. Tony Parker then botched two early free throws, and one would immediately think that the Spurs were suffering from the after-effects of having to ward off the never-say-die Thunder.

It was actually surprising for the good guys to be able to keep in step with the Mavericks in the first half. The team's legs looked like they were dipped in cement coming in as outside shots weren't on-point, but to their credit, players kept repeatedly penetrating the lane and trying to create opportunities -- helping collapse the defense to open up shooters, trying to get the high-percentage shot off, or at the very least, getting to the foul line. This plan nearly worked to perfection as the Spurs stuck to the Mavs like glue, behind only by 2 points as the teams went into their respective locker rooms at half time.

I think at this point, it's also important to note that Stephen Jackson acquitted himself quite well in defending Dirk early on. You can already see the value of the intangibles that he brings to the team, as he was trying very subtly to get under the skin of Nowitzki, who was starting to heat up after repeatedly abusing Blair's defense. At one point, Captain Jack drew a nice offensive foul and also sufficiently contested a couple of Dirk jumpers.

The second half though, was one of those games when the other team just manages to shift to another gear to get some separation, and does enough to hold off repeated comeback attempts. The hated Jason Terry came alive to inject some scoring punch to an injury hit Dallas roster which was missing key big men Brendan Haywood and Shawn Marion. Vince Carter and Jason Kidd also drained a few timely and ruthless long bombs, while Beaubois playing Parker to a near standstill in terms of scoring helped the Dallas cause tremendously as well. Speaking of Parker, of course it also helps the other team when he kept on missing what seemed like a truckload of open jumpers which, even in an unbelievable career season, is bound to happen once in awhile. 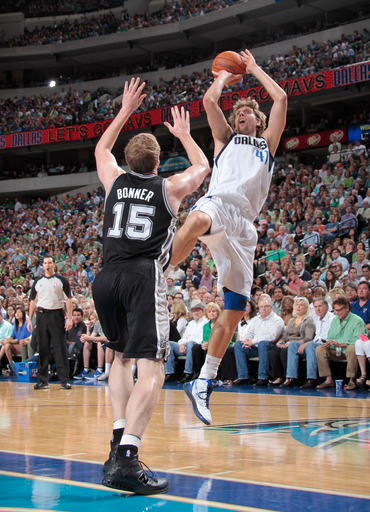 And oh, let's not forget the Big German. Before his team's dream run last season, I've always been quick to classify him on the Steve Nash category, players who only played the game one way, but really excelled at it. I think it was rather commonplace back then to call Nowitzki "irk" for his lack of D, and then throw out the "soft" tag for his inability to lift his team to victory. In reality though, Dirk has been, at the very least, a neutral factor on defense -- doing just enough to not become a liability and also using veteran smarts -- and an absolute monster on offense. He's been doing this for years, and he's proven that he will always be a tough out for the Spurs (and for any team in that matter) both in the regular season and playoffs.

He showed exactly why in one play during the 3rd quarter, when he was being hounded by Manu Ginobili. Dirk was able to launch a tough jumper just inside the three-point arc that swished cleanly through the net, all while he was being held and bumped out of position. It was as incredible a jumper you will see in a game, and reminiscent of Larry Bird when he'd manage to get off a shot in the face of blanket defenses, and you'll realize that he's just got that shooter's gene because the ball still clears the net with a soft whistle.

So to ask the inevitable question, what exactly does this loss mean for the Spurs' title hopes? You can say that for this year, I'm kind of subscribed to the Mark Cuban (gasp) school of thought wherein everything that happens in a lockout-shortened season would reek of aberration, and that the only thing that matters for now is getting to the playoffs healthy, regardless of seeding. At that point, you'd just have to trust that your team's system would be enough to carry you through, and that your stars will play like stars when games are on the line. Right now, the Spurs ARE getting healthy by the game as they try to work back Ginobili and even Jackson in shape. I'd expect Pop to finally start settling on a fixed rotation, although the starting shooting guard and small forward spots look to still be up for grabs. Chemistry will be a tougher factor to establish since the team will be facing a rather busy schedule in this latter half of the season, but as I said, everyone's able to play so for now, I just might have to be content with that. 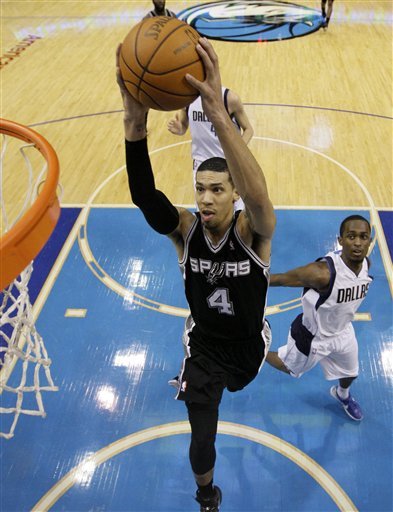 3 -- Tony Parker. Tough night, but he was on-point with his passing, something which you wouldn't see from him maybe 5 seasons ago.

2 -- Tiago Splitter. He was money in the post and pick-and-rolls. Even wowed the announcers with some "strange" footwork.

1 -- Danny Green. What can I say? This guy has taken a particular liking for the Mavericks, playing really well against our rivals. Should be a good sign going forward.

We get a long three days of rest, and then after that, our very first back-to-back-to-back looms. It's gonna get a little bumpy, so hold on to your seats, folks.