Share All sharing options for: Observations from Recent Spurs Losses

The following are observations I've made during a couple recent losses to "contenders" or at the very least playoff teams. Specifically, I wrote some things down during the Clippers game and the Mavericks game. Since the roster changed, I edited out some from the Clippers and focused a bit more on the Mavs. These are things I'll be looking at going forward, especially in regards to the defensive rotations and the minutes rotation. As always, I'd love to know what you're seeing that I'm missing or what I'm seeing that you're missing, so let me know in the comments.

Why are the Spurs leaving shooters in the corners to help defend other players? I'm trying to figure out when we started doing this, and at first I thought it was isolated to just Richard Jefferson, but it's clearly spread to Manu and a couple others (mostly Danny Green) as well. I don't ever remember the Spurs making a habit of this before. But they're definitely doing it now, and it's killing them. I'd rather give up a contested layup than an open corner 3. Against the Clippers, Mo Williams and company hit, I think, three from that spot total in the fourth quarter. Unfortunately, this is not an isolated incidence. I thought this was something that would tighten up as the season has gone on, but it still hasn't, and I'm more worried about it than interior defense or rebounding. Defensively speaking, it is always better to give up a contested two (without fouling) than it is to give up an open three. We won championships because teams were dumb enough to leave our shooters open. Now, they are giving us a taste of our own medicine. Please, San Antonio, stop leaving shooters open. I don't have much hair left to pull out.

I wasn't at all happy with Danny Green's game against Dallas. He's pretty much solely responsible for the opening lob play- he got caught ball watching and hadn't even got around the (weak) back screen by the time the ball was in the basket. He got cheap fouls trying to reach and gamble for steals. His offense was spot on, but his defense was horrible. He frequently left Kidd/Terry to hedge inside and was late getting back to close out. He needs to learn when it's ok to do that and when it's not. There's no excuse for Jason Kidd getting multiple, wide open, three point attempts.

Overall, Blair's defense on Dirk was passable. Not great, not as good as last time, but still not bad. I think his ability to push Dirk off his spots, be physical, and generally harass him as long as the ball is low makes for difficult possessions for Nowitzki. He can't challenge the shots as well once Dirk raises up, but a seven footer shooting a fadeaway can't really be challenged once the ball is above his head. If Blair can get a bit more comfortable playing close without fouling, he'll be nearly as effective as Antonio McDyess was last year- which is a very surprising thing for me to say. The only time Dirk got a completely clean look at the basket was the spin move for the dunk, which was as much Tim Duncan's fault for not providing help defense on the baseline. You can pretty clearly see all Dejuan was trying to do was force him that direction, and you can see Tim look at Dejuan after the play with a "my bad" type of look on his face. Without the benefit of a shot chart, and just based on memory, I'm pretty sure the toughest shots for Dirk are along the baseline. He missed several last night. That's probably an effective strategy. Also, forcing him to dribble and then pull up would also likely make shots more difficult, as opposed to just turning around and fading away.

If we play Dallas in the playoffs, I think our best options for defending Dirk are Jackson (who did outstanding), Kawhi (who also did well) and Blair (who is the best on our team of denying the ball). Obviously, it's pretty easy for me to play armchair coach, but those three were the most effective against him last night and in the earlier game this season. I haven't seen Tiago on Dirk much at all, and I feel that's likely to continue. Dirk does most of his work away from the basket, given the fact that he's going to shoot basically whatever he wants over whoever he wants, it's better for the Spurs to keep Tiago around the rim in case Dirk swings the ball around and it results in guard penetration.

Speaking of Stephen Jackson, all of his comments seem to indicate there won't be any character problems. I think he's genuinely excited to be back and will take whatever Pop gives him. Obviously, time will tell, but based both on gameplay and the two days worth of interviews/tweets, I already think that not only from the business perspective but also the basketball perspective we made the right move. While covering Dirk, he got whistled for a foul, and while I wouldn't have been surprised had he gotten a tech, he said a couple of things and raised his hand, acknowledging the call. Later, in a similar situation, Dirk backed down, Jackson took the contact and fell, and he got the benefit of the doubt from the ref. Well played, Captain.

The thing I like most about Bonner's game when he's not making shots are the hard fouls. He seems to be one of the only players on the team who understands that if you're going to foul, foul hard enough that they don't also score. I think he took it personally that people are saying Jackson gives us an upgrade in toughness. Mad Dog Matt Bonner don't need no dang upgrade!

In fact, Bonner and Jackson remind me of Will Ferrell and Mark Wahlberg from The Other Guys. Will Ferrell being the outwardly boring accountant, Wahlberg being the "tough guy" on the outside. In reality, both are just misunderstood. 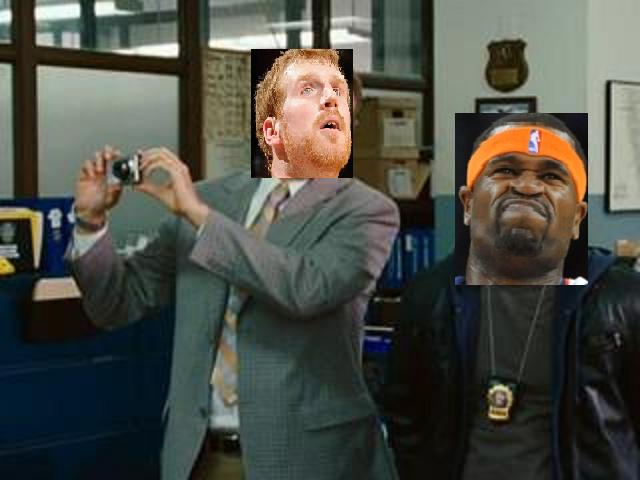 The Other, Other Guys