The 20 point late-third quarter lead had dwindled away. The shots were no longer dropping. The plays had stopped opening huge lanes to drive through, and the free-flowing feel that had defined so much of the game had turned into a difficult slog through marshy ground that sticks to your shoes and pulls them off your feet.

There were 59.7 seconds left in the fourth quarter in Oklahoma City, and James Harden waited on the near sideline to inbound the ball. Russell Westbrook was on the far baseline being guarded by Danny Green. As soon as Harden received the ball from the ref, Westbrook broke, and sprinted out to the three point line to receive the pass. Green was taken by surprise and trailed the Thunder's point guard by a good five feet.

Just as Green looked about to slow down and prepare to defend Westbrook, Harden threw a bounce pass and Green accelerated. No, that's not an accurate description of his motion. It would be better to say he pounced. That's better. Where was I? Oh, yes. Green was flying by the time he drew even with Westbrook, and reached out his left hand, intercepted the pass and streaked for an uncontested dunk with only enough time to dribble the ball three times. San Antonio 111, Oklahoma City 105. The lead was back up to six points, and there were 56.6 seconds left in the game, but it was all over besides the crying.

Sure, Matt Bonner would block Westbrook on OKC's the next possession, and Green still had to collect his third steal of the fourth quarter, but the game was, for all intents and purposes, pretty much done. Green had shut the door on the Thunder's comeback attempt, and San Antonio's crunch time prowess took a step back towards what it used to be, once upon a time -- defined by excellent defense.

As much as the first half was defined by superb offense, the second half was made up of hard-hat, roll-up-your-sleeves, grunting shoving pushing defense. Sure, the Spurs held the Thunder to 19 first quarter points, but as Pop said in the interview after a commercial break, there's not a lot of credit you can take when your oppenent misses dunks.

So, in this matchup between the teams with the best records in the Western Conference, with Manu Ginobili held out of the game "to rest", with Stephen Jackson in Dallas waiting for tomorrow night to join the team, and as Tiago Splitter logged just three minutes due to an upset stomach, San Antonio jumped out to a huge lead on the strength of an offense that was generating excellent looks nearly every trip down the floor.

But it was the return of the defense that was such a delight to behold. Why talk about defense when San Antonio yielded one hundred and five points? Well, because OKC is one of only four teams in the association that averages over 100 per game. Because Kevin Durant is the league's leading scorer at almost 28 a contest -- oh, he got 25 against Kawhi Leonard, but he had to work hard on every possession and it took him 19 shots to get there.

Green and Leonard each logged over 38 minutes as the Spurs were short-handed. They had 8 steals and 36 points between them. As Tim and Manu take their daily journey further from their youth (Duncan moved up two spots on the career rebounds list to claim the 18th spot) we like to look for signs that there are good days ahead. Well, tonight was filled with those mile markers. And the place we are now isn't too bad either.

Three observations:
1. Pop has said that Green is less likely to get minutes in the playoffs. WHY POP WHY?!? If James Anderson is still in the rotation and Green is sitting on the bench in the postseason, I'll pull what little hair left I have left clean out, roots and all. This was yet another "career" game from Danny Green. Many more nights like this and we are going to have problems re-signing him. I suggest we bench him until he signs an extension.

2. Without ever taking the floor, Stephen Jackson has already proven why the trade was an absolute bonus. As a statistician, it would be easy to write this game off and say "too small a sample size." EEEEEEHHHHHHHH! Wrong. Kawhi Leonard is ready to be an NBA starter. He's shown gradual improvement throughout the season, his shooting has been consistently better over the past two months (after adjusting to NBA defenses) and, as I said, his defense on the best scorer in the NBA was otstanding to say the least. Kevin Durant's average points per possession? 1.07. Tonight? Kawhi was largely responsible for holding Durant to .96 ppp. If that doesn't seem like such a huge difference, it's because it's statistical. To put it in layman's terms, though, he turned Kevin Durant into a scorer less efficient than Richard Jefferson. That's not a knock on Jefferson, either, because he's a relatively efficient scorer for a role player. Kevin Durant, though, is no role player. For further comparison, Kris Humphries scores .95 ppp. Let's acknowledge that there's really no stopping Kevin Durant, and it probably helped that the Thunder were on a SEGABABA, but Kawhi was just physical enough to throw Durant off without getting in foul trouble. Excellent, excellent, excellent work for the rookie. Kawhi absolutely deserves 35 minutes a game, even on a contender.

With all the talk about the trade, everyone's asking how Jackson fits into the rotation. I'm asking: WHO CARES?!? We have Kawhi Leonard. My guess is Manu starts and Jackson comes off the bench with Neal and Green. But again, for tonight, I don't think I care. For tonight, I'm glad that we had Kawhi Leonard and Danny Green because they can clearly be contributors on a championship level team, since they helped close such a team out.

3. Our bigs are still better than your bigs. The two supposed weak points, Dejuan Blair and Matt Bonner, both earn their keep. Yes, Dejuan still struggles boxing out. But he is now, even on bad nights, an average defender and on good nights a good but not great defender. His rotations are timely and his positioning is really, really good. While I'd still rather have Tiago in the game if we need a stop, Dejuan has absolutely improved enough to no longer be a liability. I'm not basing this strictly off of tonight but off of almost an entire seasons worth of taking charges and cutting back on lazy reaches. I'm glad that Dejuan does not feed on burgers alone, but on Kendrick Perkins, Nick Collison, and Serge Ibaka, especially when they get in foul trouble.

Tim Duncan- ho hum. 16-19-5 from him. Yeah, he's had a few of these games this year. No, I don't ever get tired of watching them. If only he shot better on his free throws...When OKC had cut the lead to two points with a minute to go, what play did we run? 4 down. What was the result? A Tim Duncan spin move and 1 on Serge Ibaka. Of course, he missed the free throw. Finally, this brings me to Matt Bonner. We have to pay special attention to Matt, because Fred was the regularly scheduled recapper and we know that Fred and Matt= BFF's. Matt Bonner, in spite of shooting 1-3 from 3, and 1-5 overall, led the team in +/- with a whopping +16. In addition to that, he saw the floor a lot during crunch time. And this was not a bad thing. In the last minute of the game, Matt Bonner put on the hoagie hunter hat and served Russell Westbrook a Spalding sandwich on a full speed layup attempt. Taste it, Russell. Did you notice the extra ginger he put on it? He heard that was your favorite. Matt Bonner, ladies and gentlemen- 2 blocks, a steal, and a FARS breaking play, just when you need it most. 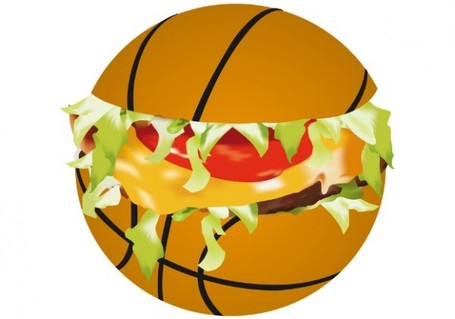 Your Three Stars:
Honorable Mentions: Tony Parker. His aggression kept the Thunder off balance. He wasn't as efficient as usual, but he is absolutely the MVP of this Spurs team. Even ESPN is starting to pick up on it. Dejuan Blair also gets in here for continuous aggression, solid defense, and taking a couple charges. Were it not for the turnovers (I counted three, the box score says five), the beast would have a star of his own.

Third Star: Danny Green. Another outstanding game from him. Efficient, aggressive, fearless. All the intangibles that kept him on the Spurs were on full display tonight. In the PtR blogosphere (aside from a JTU) perhaps the greatest compliment that can be received is being described as Manu-esque. Tonight, Green was Manu-esque.

Second Star: Tim Duncan. I considered switching him and Dejuan, since Tim continues missing free throw after free throw, but Dejuan did too, and Tim also had a blocked shot for every free throw missed. I'd call that a fair trade.

[Editor's note: PtR member SpurredOn made some excellent points in the comments that I wanted to be sure everyone saw, so I've included them up here. -jrw ]

- I think that Leonard will see appropriate minutes come playoff time (Green too) but Pop does not want to burn out the rookie in a condensed season and leave his tank empty come May/June.

- Green's huge plays in yet another road game (this makes up for the shoulda-been-win he earned in Dallas) reminds me of Stephen Jackson circa 2003. One can never have enough cold blooded road assassins.

- Should anyone use the SEGABABA excuse for OKC, please remind them that over the previous two seasons, the Spurs played three games at OKC. All were a SEGABABA for the Spurs. All were Spurs wins. Two of them (like tonight) had a member of the Big-3 missing. Seems that meme from three years back about how the young Thunder gave the Spurs as many problems as any team can be put to rest.

- Acknowledgement to Pop. He and his team were dialed in for an important latter half of season road game. He had Neal take a foul (which they had to give) with around 1:00 left in the 1Q so that Tony could sub out. He had Green take a foul (they had only two team at the time) with 2:45 remaining so that the TV timeout would come and his exhausted squad could get a break without using a team timeout. All brilliant.

Saturday night: a team you might have heard of from Dallas, named after a disobedient horse, owned by a Cuban.

Sunday-Tuesday night, the last extended rest on the schedule for the Spurs before beginning the brutal finishing kick.