Tonight the Spurs play the Mavs in Dallas, the third game of the season series and the first of a two-part mini-series that concludes at the AT&T Center next Friday. With the win-loss records and remaining schedules being what they are these teams can't help but determine each others' destinies. The Mavs could hurt us directly by taking these games or indirectly with losses to LA or Memphis, as they play both teams twice more. If the Spurs win both and sweep the season series (that Jan 29th overtime loss counts as a moral victory) Dallas will be barely hanging onto a playoff spot with the worst of their schedule still to come.

San Antonio is playing its second game without either starter and minutes-sponge Richard Jefferson or the player he was swapped for (the fearless Stephen Jackson). A lot of attention is rightfully going to be on Danny Green and Kawhi Leonard to show what they bring to the table in RJ's old role. They both played superbly last night in OKC, shooting a combined 13-21 and 7-11 from range. The other bit of relevant recent news is an injury to Brenden Haywood that will keep him out for at least five games, complicating a brutal stretch for the Mavs and catapulting Ian Mahinmi to the starting lineup. Like Kawhi and Danny, this is Mahinmi's chance to justify some playoff minutes ahead of the veteran making ten times the salary.

But who am I trying to kid? When the coaches are Gregg Popovich and Rick Carlisle you know the veterans will get the first chance and the youth movement will be the back-up plan. No rookie has played an important playoff role for the Spurs since twenty-five-year-old rook Manu Ginobili dunked on the Lakers (a moment's pause to enjoy that memory). Carlsile had young'uns Mahinmi and Corey Brewer chained to last year's playoff bench and Pop would probably have done the same. The wing rotation this year for the Spurs will feature minutes for somebody under 30, even if S-Jax replaces every minute that used to go to R-Jay, but I expect Popovich will err on the side of experience as long as he can. 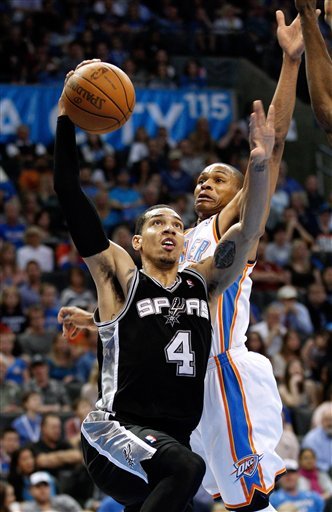 Danny Green is on the rise. Will it translate into playoff minutes?

Jackson has plenty of NBA experience, but he doesn't have the ritual of four I-35 match-ups a year ingrained into his being like Duncan and Nowitski do. Sir Duncan has done battle with the Dirk enough times - 43 regular season and 26 playoff games - to make a strike-shortened season all of their own. Here's the all-time head-to-head table for these Texan titans:

Provided by Basketball-Reference.com: View Original Table. Minutes per game and Points per game are eerily similar.

Provided by Basketball-Reference.com: View Original Table. Dirk gets better in the playoffs. Tim still has the W-L edge, 14-12.

This game has real importance for the players and fans, especially if the they're interested in the emergence of Danny Green and Kawhi Leonard or Mahinmi vs. his former mentor. For Duncan and Nowitski though it's hard to see it as anything more than a drop in a vast, vast ocean. While the new guys are hustling for a place in the rotation the established pros get their motivation from a bigger picture. The competition and familarity should make for a memorable game for those of us who haven't lived it 69 times before. Lineups and prediction below.

Game Prediction: SPURS BY THREE. These teams both know how to shoot. Even without Richard Jefferson I think the Spurs have better weapons overall and can keep a bucket or two ahead of their rivals. Predicting a win this close is basically admitting that home court could swing the re-match the other way, though.