Share All sharing options for: State of the Spurs: Trade Deadline Evaluation

For those of you who were never mathletes (myself included), this is the order of operations on any mathematical equation. You start by solving anything in parenthesis, then solve for any exponents, then do any multiplication, and so on until finally you do addition and subtraction. What does this have to do with the Spurs? Let's turn them into an equation.

As we all know, everything starts with our big 3, so let's put them in parenthesis. Who else, though, gives us positives every night? For me, night in and night out Tiago Splitter and Kawhi Leonard have been positives for the Spurs. They always bring more than they take away. It's only natural that Matt Bonner be listed over on the other side of the +/- symbol. I don't know if you know this or not, but in algebra, sometimes you get an option of whether or not you want to + or -. Therefore, Matt Bonner=algebra. Gary Neal goes there with him, because if he's asked to do too much or if his shot isn't falling (or both) then he can be more of a negative than a positive. Blair's effectiveness depends on usage and matchups.

Look, I've been as big an RJ supporter as anyone else on PtR. At the beginning of the season, I argued that it was fan expectations, not his actual performance, that was what caused him to be viewed in such a negative light. Then, I think I fell into the same trap of raising my own expectations for him too high. We can't really complain too much about him not slashing and attacking the basket, because that's not really his role, but his shooting percentages are dropping. His defensive rotations have been mostly poor. Basically, over the past month, he's been a pretty consistent negative. I'm not even going to put the blame on RJ. He's done everything that was asked of him, but at some point, you can't make a square peg fit in a round hole. I appreciate all his hard work, twisting and contorting his game to do everything he could to fit, but it just didn't work out. I still think it's more expectation than reality, but I don't think there's much of any doubt we are almost all glad to see Jefferson, politely, shown the way out. 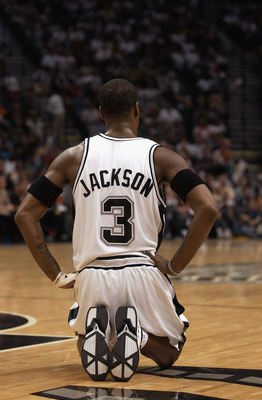 But this leaves us with another question: is Stephen Jackson a fit? My first reaction was an astounding "yes." I thought this was perfect. Then I read a few other reactions. Let me state right off the bat that I do not expect any issues related to Jackson's personality. He always behaved as a Spur, and always behaved when he was on a winning team. I expect that trend to continue now that he's a Spur again. While "consummate professional" may not be the first words that spring to mind, Jackson is fond of quoting Tim Duncan, who called him the "ultimate teammate". While Jefferson was certainly the former, I've not heard anyone refer to him as the latter. I've argued against the "on a winning team with Pop and Duncan personalities can be controlled" point a couple of different times, most recently in regards to Javale McGee. I think, though, that since Jackson's been a positive contributor before, that I'm not really contradicting myself too much here.

On the court, though, statistics point to some potential problems with Stephen Jackson. This season, he's shooting an astoundingly (bad) 27.8% from 3. For his career, he's not much better. The good news is that the majority of his makes are assisted. While he's capable of creating shots for himself, he's going to be on the floor for the Spurs with at least one other creator (either Tony or Manu) at pretty much all times. This is a significant upgrade from playing with Brandon Jennings, a malcontent shoot first point guard that would make even the most ardent "Trade Tony" fan think twice. Meaning, simply, that he's going to be expected to do less here and he should thrive in that reduced, more specific role.

More importantly, because he's capable of creating for himself and others at a level less than Manu but still significantly greater than Gary Neal or Danny Green, he gives us, basically, a "survive without Manu" card on the off chance that Manu gets yet another injury this season. This was especially necessary given the now permanent loss of TJ Ford.

MOST importantly, though, this helps solve some of our logjam at the SG position. How, you ask? Well, as the playoffs get closer, we're going to see a little less Danny Green (according to Pop). Since RJ wasn't playing well, and Kawhi Leonard is playing very well, it only makes sense to make more room for him to get minutes at his natural SF spot. That means less minutes for Kawhi at SG. Now, our playoff rotation looks something like this:

As much as I dislike the idea of Green getting less minutes, for this year, I think it's necessary to give Neal (and Kawhi) the nod for playing time. While Green is good at lots of little things and has all the intangibles that I love in a player, Neal is a prolific shooter, Kawhi is a better defender, and Jackson is a better ballhandler. Freeing up Kawhi to play SF and small ball PF was a big step forward for this team, and even though we took on an older player, it's a step forward for our youth movement. In addition to all of this, I think it's important to note that Jackson's contract expires at the end of next season and isn't so large it should keep us from re-signing our own guys after this season. Even though we could have amnestied Jefferson after the season, I think for this year it's a case of addition by subtraction (more Kawhi by way of less Jefferson) and for next year it's a case of getting something instead of nothing. Amnestying RJ, while always possible, would not have been considered a shrewd move. Paying a player to go away and play for someone else is never palatable. The Spurs acknowledged that they made a mistake and got a good player with an expiring contract for next season as a trade chip. Moreso than what I expect him to do on the court, the possibilities of what the front office can turn him in to next year are why I expect this trade to eventually be viewed as big a steal as it is. It gives us more positives on our championship algebraic formula for this year, and it gives us the possibilities of a whole new equation next year.

The way to winning championships has always been solid defense and taking care of the ball. While most of us would argue that a backup big (or a better defensive one) was our biggest need, it's easy to see why adding the extra ballhandler and freeing up more time for our best perimeter defender became a priority for the Spurs. To me, when you look at the deal that way, it becomes an absolute no-brainer. I don't think there's a serious possibility he'll interrupt team chemistry, on or off court. In the event he's not a good fit, however, it's much easier to get out of his contract in a productive manner than it would have been Richard Jefferson's.