It had been an unusual start to the season. A lockout, a league MVP start for Manu and then a freak injury, Neal needing an emergency surgery that left him out from the beginnings of the shortened season, a new rookie with large hands and a strange name, a veteran backup point guard who retires midway through the season...yes, Pop thought to himself, a strange season so far....

Pop looked over his squad. Tim, the aged veteran. At this point in his career, TIm had to reinvent some parts of his game. He could no longer rely on his foot speed, jumping ability and his strength alone to overcome the opposition. Although his true strengths were always his fundamentals and his will, the natural athletic ability coalesced with the other two to form an opponent damning trifecta. A deadly trifecta that would in fact create a basketball persona so powerful that it would grow to be called the GOATPUFF. But on these long night, short days and even shorter schedule, the mighty GOATPUFF could only compete at a fraction of his once supreme capabilities. On occassion though, the GOATPUFF has been seen in his true form. Totally consuming the opponents by crushing their dreams on the glass, denying their entry into the paint and wrecking havoc upon the minds of the opposing coach. Yes, the GOATPUFF still lived and breathed. And on occassion, he conquered through sheer willpower.

Wow, Tim really makes me think deeply, Pop thought. Or maybe, it was just the new Malbec he had found.

Tony. Now Tony had matured into Pop's perfect point guard. A defensive killing, driving machine that could not only slice up opposing big men but also stop and pop a midrange jumper that left opposing guards looking helpless. Yes, Tony had matured. This once, unknown, young but very quick French point guard had now grown to lead one of the most successful organizations in all of pro-sports into the fray once again. Tony had earned his stripes. This was no favorite son who earned dad's keys just because he was a good kid. No, Tony bled, crawled, fought, dove, kicked, dribbled, shot, skidded, slashed and cut through the Spurs opponents over the past decade. He had earned his role as the focal point of the Spurs. Pop was pleased with Tony. 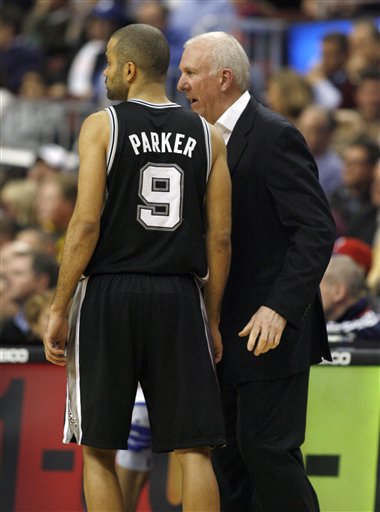 All the pieces are here, thought Pop. Danny Green brought hunger for the ultimate success. Neal brought the joy of playing the game. Blair was determination. Tiago brought the dependability of a quiet and capable veteran. Kawhi was promised potential. Bonner brought coachability. Tim was the powerful veteran, refusing to be defeated. Tony brought leadership. Manu was, well as Pop liked to say, was Manu. Joseph brought the HVC. and RJ, RJ. Pop looked at RJ. The gleam off of RJ's well shaven head. The small, impish, childlike grin on his face. That grin that reminded Pop of a too nice of kid at the Academy. The kid that was willing to follow directions, was polite, was a good worker, but....that's it, there was always a but with RJ.

What was it that RJ brought? Coachability? Not really. He did not understand the game at a deep enough level. Joy? No. Toughness? No. Defensive specialist? No. Determined? Not really. Hungry? meh. Dependable? Sometimes. Manu-esque? No. Powerful will? No. Leadership? No. Worthy successor? Only to a zombie. HVC? Too expensive. Hhhhmmmmm, RJ. Pop had tried to get RJ to fit in now for three seasons. And he does fit, but...

Good. Get Larry Riley of Goldenstate on the horn.

What? Are you serious? Of course you're serious. Its 10 minutes to deadline.

Oh, probably not this year. But you're squad is looking pretty good.

IF you think being horrible a defending, unable to stop a second rate team from scoring 100 points on us and being completely unefficient on the other side of the ball is .........(oh wait a minute). Yeah, we look pretty good. Thanks. Bye.

Pop, did you just do what I think you did?

OKC are 6-5 when outscored on fastbreaks