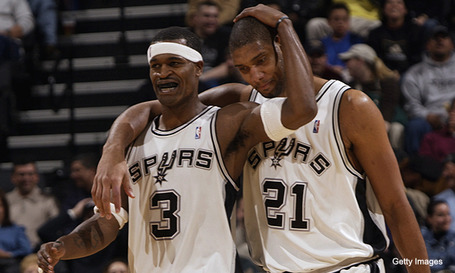 It goes without saying that, amongst all of the denizens of the staff of PtR who ply their writing trade, none of them so deftly wield the sword of hyperbole as I, or are as content to live outside what most accept as reality. I often spend countless hours creating my own representative topiary thereof; I can often be found on the far flung reaches of the site, carrying on about things that (hilariously, hopefully) make no sense at all. Indeed, to those of us over the age of 25 or so, it could be argued that I am to the basketball world what that old wizard who gave the cryptic directions through the Lost Woods was in Zelda. 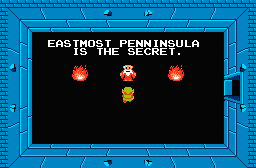 With that in mind, it brings me a great deal of both pleasure and relief to enter into the realm of serious discussion. Join me. Or don't.

It should be made abundantly clear at this point, if such a point hadn't already been derived from the article's title, that Stephen Jackson hangs out around the peripherary my favorite players of all time in the same way that Jason Terry hangs out around Higgins' Pharmacy. Simply put, I love everything there is to love about him, and therefore love everything about this trade. If this is a PtR where my love for Stephen Jackson has to be kept a secret, then this is a PtR I do not wish to be a part of.

I'm not entirely sure when my bizarre affection for a player whose statistics lie far below those of others in my group of favorites began, but I have a feeling it has always had more to do with the style of play Jackson prefers that does it for me. His is a style that, to me, perfectly blends the diligent approach favored by so many scholarly basketball fans, and a loose, carefree grasp of the game, innate to those who grew up favoring playground games over organized leagues. His will to win joined so visibly with a desire to enjoy a game he so clearly loves are sleeves of equal length upon him. In that respect, to me, he is the missing link between polarizing players like Rasheed Wallace, and widely admired ones like Tim Duncan. A fringe player cut from a cloth few others come from.

Maybe it's the mouthguard. You don't see those too much any more, and rarely in basketball. No one piece of nonessential equipment (in any sport, save boxing) represents a visible desire to mix it up, like the mouthguard does. In an era where height and size are no longer inversely proportional to shooting skill, Jackson embodies the type of player coaches will eventually tell you, however begrudgingly, that they love to have. He has the attitude for sure, as detractors will leap to point out, but the fact remains that there has been nothing I've ever seen from Jack that would leave me with the impression he wouldn't run headfirst through a brick wall if it meant his team would win. A guy like that can have a spot on my team any day.

Speaking for his aforementioned attitude, most famously displayed in his willingness to accompany Ron Artest into the stands during the infamous 2004 Palace Brawl, I would beseech you to acknowledge through your own experiences that we have all known certain individuals who wear their desire to win and support for their teammates in different, varyingly intense ways. As a person who has been labelled hyper-intense for as long as I've played sports in any capacity, I can most definitely relate to the kind of snap decisions that come with such an outpouring of heart and emotion while on the court or field. While this is in no way an attempt to say Jackson made the right decision back then (a sentiment he echos here), I know exactly what it feels like to be so fiercely intertwined with a team that things like that do not seem far beyond the realm of possibility if the serious question arose. Having spent part of his career in San Antonio already, there is a certain weight that comes with the endorsement Tim Duncan gave when he lauded Jackson as "the ultimate teammate". Without a doubt, such a player doesn't need a high average in any statistical column to vindicate himself. He simply needs to be there and be ready to go at the drop of a hat. Jackson brings that in spades.

Perhaps the one drawback to acquiring Jackson, or at least the one to which I immediately key on, is the fact that the Spurs are getting a man who has spent much of his time since his initial stay in San Antonio with teams who orbit the playoffs like distant satellites, either for the reason that they could never coalesce into everything their potential suggested, or because they were just plain bad. The risk there would be that this most current Jackson is not the same one I celebrated a paragraph earlier, but one in which the fire to compete has dimmed. While I don't think this is the case at all, it is worth noting that the Spurs' cost in the trade was the eternally well-meaning Richard Jefferson, and a first round pick that will be forever deliberated upon should the Spurs not win all of basketball immediately following Jackson's arrival. While the pick itself is completely irrelevant in its current capacity, as is any postulation surrounding it, there is some blowback to the departure of Jefferson. As one whose perhaps unfairly high expectations were never met during his tenure with the Spurs, it should be touched upon that Jefferson did his best to help the Spurs win however he could, although I could clearly see frustration in the way he played at times. The best way to look at this trade is as a player for player swap between two individuals, one of whom would put his body through the wringer for the team, while the other, Jefferson, stopped just short of giving the same. In that light, it should be entered into the evidence that I owned a Richard Jefferson Nets jersey long before I obtained either my Duncan or Jackson jerseys. I've spent a long time being one of his fans, but that's just the way things go.

I can't really say for sure what I expect Jackson to do in his second tour with San Antonio, the way the roster and minutes look this year. I can cop only to knowing for certain that he'll have a bit less time per game to make his contributions, at least barring adjustments to be made once we see how he jells with his new mates. Though he isn't the post player most Spurs fans have been coveting, he is rangy at the guard/forward position and is definitely willing to scrap for a loose ball or two. After seeing how some on the team responded to potential boards during last night's game with Orlando, I wholeheartedly welcome another body who, though creakier than he was 9 years ago, is up for a scrum if it means a few less chances for the other team. I don't want to say things like "he'll stretch the floor" though, because I really have a problem with sports journalism cliches that can be inserted anywhere. Yes, he can shoot the three ball, but I'll look for him more to hustle and get the Spurs an extra possession or two before he challenges Bonner for creative control over distance attempts.

It doesn't take much for me to be irrational about things, mostly in part because I love the reaction that thinking light-years out of the box attracts. I will readily admit that this news is, for what basketball means to me on a personal level, the best I've heard all year. I won't pencil myself into any majority of thinking with that opinion, but the fact is that I don't really care. When I declared my allegiance for San Antonio, Jackson had already left for Indiana, so in that respect this trade brings me back to the summer of 2003, when I definitely wanted the Spurs to win, but was more worried about scuffing my new sneaks on the courts I played on that summer. Maybe that means I'm old and nostalgic or something, but for now I'll just settle for being stoked beyond belief that Captain Jack is back.