A more positive view on the trade will be posted in the morning. For now, let's all feel bad about it and start panicking ;) Edg5.

So our old friend is back. As you know by now, the Spurs traded Richard Jefferson to the Golden State Warriors for Stephen Jackson. Captain Jack enjoyed a good couple of years with the Spurs, even winning a championship in the process, before leaving for greener (and by that I mean more money) pastures. After a successful run with the Indiana Pacers and the We Believe warriors, Jackson has seen his career take multiple turns for the worse, once his skills didn't warrant the headaches anymore.

After sulking his way out of bottom-dwellers like the Warriors, The Bobcats and the Bucks, Jackson is back with the San Antonio Spurs, to the rejoicing of many. But is the player the Spurs are getting the one fans remember from that magic 2003 championship run?

First, let's compare Jackson to Richard Jefferson. I didn't dislike RJ as much as some people, but I have to admit that from a versatility perspective, Jackson is superior. What RJ brought to the table was 3-point shooting and, while Jackson can't really provide that (career.337 3-point shooter), there are other players in the roster that can and if Leonard can keep up his shooting from the last few games (unlikely), it might not hurt the Spurs that much. Jackson is a slightly better defender and can handle the rock if needed, something that RJ was unable to do. Jefferson has rebounded slightly better on average than Jackson the last 3 seasons, but the difference is not significant. RJ was the consummate professional in San Antonio and a clear example of a player that got over himself, as Pop would call it, knowing his role and sticking to it, even if it meant lowering his public profile by becoming a role player instead of a prolific scorer. Jax is as volatile as a player can be, and has clashed with coaches and organizations about his perceived worth, asking for an extension on a contract that still has two years to go. Having said that, I trust Pop and the Spurs veterans to keep Jackson in check, and playing for a contender might make him happy enough not to sulk. Now that's out of the way, we have to forget about Jefferson when thinking about Jackson. RJ is gone, so now we have to focus on how Jackson fits instead of how big of an upgrade he might be over Richard.

How Jackson fits with this team.

So why am I not ecstatic about the move? First, as I said there's a question of fit. Jackson has always been a high usage player, with his efficiency varying year to year but not the amount of possessions he used. His career Usage % of 24.5 is just a little lower than Tony Parker's 25.5. And Manu Ginobili's 25.1. Jefferson was using a really low number of possessions for the Spurs at 14.7. That means Jackson is probably going to take someone's shots and it could be any of the Spurs' Hall of Fame backcourt. When Jackson was playing for the Spurs in 2003, Tony had a usage % of 22.9, one of the lowest of his career; Manu's was 22.1, the same as Jackson. I don't know about you, but I think Manu and Tony should have the ball in their hands as much as possible, so the possibility of Jackson taking it from them is not particularly appealing. It will be on Pop to come up with rotations that give every player the possessions they need. The one positive is that Jackson's usage on that 2003 team was the lowest of his career, meaning he might dial down on his ball hogging ways on a good team.

So we know Jackson likes to have the ball in his hands a lot, but what does he do with it? Well, he shoots a lot, averaging a career 14.8 field goal attempts per game, almost the same as Tony, who attempts 14.9 a game. For comparison, Manu has not averaged over 14 shots once in his career. He also passes the ball well, averaging 3.5 assists per 36 minutes for his career, but also turns the ball over a fair amount averaging 2.8 turnovers per 36. Again for comparison sake, Manu averages 5 assists and 2.7 TOs per 36 for his career. We all know Manu is better than Jax, but I'm comparing their numbers to show that the Spurs should keep Jackson on a short leash, being careful he doesn't take too many possessions away from the starting backcourt.

The other problem with Jackson on offense is that he likes the long 2 pointer a little too much. Last season in Charlotte, he was averaging 4.2 attempts from 16-23 feet, making only 1.5 of them for a below average 36%. Jackson was only assisted in 56.3% of those, a mark slightly higher than league average, which means the rest were pull up jumpers. I've already mentioned that Captain Jack is not a good 3-point shooter which wouldn't be a big problem if he didn't shoot a lot of 3s but his career average of 4.9 3-point attempts per 36 minutes puts him slightly below Manu. Worst yet, his last season with the Bobcats and in his short stint with the Bucks, he averaged 5.5 attempts per 36 minutes, which means that in the recent past he's been shooting more but not better. 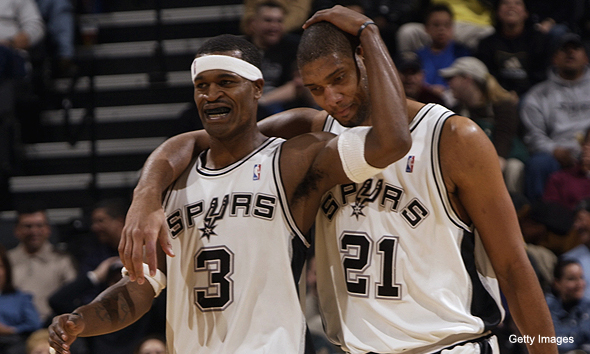 Can Jackson be the player he was in the good ol' days? And do the Spurs need that?

We pretty much covered offense so now all that's left is defense and intangibles. It's hard to use stats to cover those, since the team a player is in and his mindset can affect those numbers. When engaged, Jackson can be a solid man defender and we have to assume that playing for a contender would fire up Jackson after toiling away in anonymity for the last few seasons. A rotation of Manu, Green, Jackson and Leonard looks good and versatile when it comes to defense, but we shouldn't confuse Jackson for a lockdown defender. The other issue with Jackson and defense is that he probably won't be able to guard stretch 4s; he might have done it occasionally playing for Don Nelson, but after spending the last couple of seasons alongside Gerald Wallace it would be a huge adjustment for Jax to defend bigger players. Kawhi Leonard should have a relatively easier time sliding over to the 4 when playing small ball but he's still a rookie and hasn't had many reps at that position (RJ usually guarded the other team's PF when playing small). Leonard should see more playing time, though, and that might help the Spurs defense more than anything Jackson does.

As for intangibles, I don't assigned that much value to making love to pressure as some, and I definitely don't believe in the toughness factor. If you manage to stay in the NBA, you are tough. I would take soft Pau Gasol over tough Reggie Evans; skills are what matter, not toughness, and fortunately Jax still has skills. Jackson's reputation in the clutch is also overrated; I'd rather the ball be in Tony's, Manu's, Timmy's or even Neal's hands than in Jackson's, but having another guy that can knock down important shots in never a bad thing, I guess. As far as off court issues, Jackson has had his troubles both with the law and with most of the organizations he's been a part of, but he's always had good relationships with his teammates and he did make a good impression within the Spurs organization, which eases my mind a bit.

Finally, the biggest issue I initially had with this trade was not the first round pick the Spurs had to give up, but Jackson's contract. Jax will be on the books for this season and the next, which means the Spurs will be over the cap in the off season. I never believed the Spurs were going to be able to make a big free agent signing, but the flexibility would have been nice when resigning Timmy and Green and trying to bring over Lorbek. After thinking it over, I can see that the Spurs should be able to resign their free agents if they decide to do so and bring someone for the full mid level exception without going over the tax. Jackson expiring contract could also be useful next season, when teams might be clearing cap space for Dwight Howard or in case a panicking team decides to have a fire sale, but we'll worry about that next season.

Overall, I'm not as happy about the trade as some and I worry about Jackson's bad on-court habits and the spacing issues his lack of range might bring about. That being said, it's possible for Jackson to surprise me and accept a smaller role and play within the offense for the rest of the season; I'm just not counting on it. The fact that his contract will be expiring next season would make him easier to move should he not live up to our hopes. Trading a player that fit so seamlessly with the rest of the roster for a gunner with an attitude problem was definitely a bold, high-risk, high-reward move by PATFO, but I trust them if they think it gives the Spurs a better chance to compete this season. My fear is that while Jackson seems to be the same player he was in 2003 (albeit older), this Spurs team might not need (or know how to use) the old Jackson, essentially turning him into S-Jax 1.0.