The Spurs will host the Orlando Magic Wednesday night in what should be an extremely fun game to watch. The Spurs will show up with a day's rest while the Magic will be on their second game of a back to back. Good news for the good guys. Better news for the good guys? The Magic played Miami last night. In addition, with the trade deadline looming, it seems as if every possible external variable is favoring the Spurs. Needless to say, I have a good feeling about this one.

I'm not sure if you've heard, but apparently Dwight Howard wants to be traded. Well, he used to want to be traded. He then reneged and said if the franchise can get him more help, then he might stay. That must be a fun locker room. Fourteen guys that kind of suck and Superman himself, (according to Dwight.) It always makes me love the Spurs that much more when these situations occur. It's a fun game to play: "Things that would never occur in the San Antonio Spurs organization." Umm, the Decision. Umm, franchise guys that demand a trade. Umm, covering up a bald spot. Umm, Coach Ron Jeremy. Umm, players talking about what helps their "brand."

Players and brands. What is that? You want to rap, Dwight? You want to be an actor? Have you seen yourself next to normal sized people? It looks RIDICULOUS. I'm thinking khloe and Kim should give you the idea, or you could just watch Kazaam. Those are your best case scenarios. How about you concentrate on playing basketball?

So, the very good Orlando Magic have been very distracted this year. It's a shame because they have the talent to win the East, and as we all know, once you get to the finals anything can happen, (See: Pink Ponies, Dallas). Hollinger currently has them ranked one less than our beloved Spurs, at the six spot. The Magic have won 7 of their last 10, but did manage to lose to MJ's Bobcats on the 6th. (We went over the distraction thing, right?) 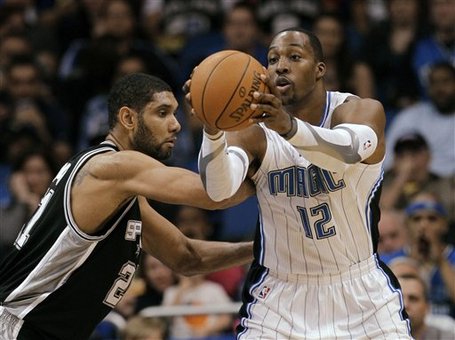 The other factor that must be controlled is none other than Ryan Anderson. The dude is shooting 41% from three point land and averaging 16 points a game. We'll have to go box and 1 tonight, (I wish the NBA allowed zones. Wouldn't it be awesome to triangle and two Miami?) Luckily, Anderson has been off recently making only 8 of his last 29 for 27.6%, 3P%. But I'm telling you, we need to crowd this guy and allow him to continue his shooting slump. When he's hot, the Magic are a very difficult team to overcome.

One last guy to keep an eye on is our old friend, Hedo. He always seems to step up his game against the Silver and Black; very Captain Jack'esque. It'd be nice to keep his scoring in the low teens, (I know that's higher than his season average. I'm cool with that. I just don't want him dropping 20+ on us.)

As far as the Spurs go, I expect Tony to continue his MVP level play. His confidence has never been higher. During the last game against the Wiz, at one point Tony was fouled and hit the ground without a whistle. He began yelling at the official, stopped himself, and scored six straight points. It was like when Neo realized he was the one. He just decided, 'It's time for me to take over,' and it was done.

I hope to see Manu get some playing time tonight. I'm still unclear as to whether he actually was injured or if Pop just got bored and forgot to put him back in the game. (The Wiz will do that to you. As will the bottle of red wine that Pop polished off at halftime.) We need to get Manu into shape. These small injuries are the result of him not being in basketball shape. Once he gets there, he'll be fine. Until then, he needs to dodge the small injuries to give his body enough time to regain its strength. Three will be turbulence for the next thirty minutes but if we can avoid the mountain, the flight will be enjoyable.

Game Prediction: Ron Jeremy's team shows up tired from their battle with the Heat and the Spurs take full advantage.

NBA Stats Cube Lineup Comparison Here. The Magic's perspective can be found at the Orlando Pinstriped Post. Did anyone watch Norm Macdonald's sports show? When I saw their blog name, I said, "Wait, what?" If you need anything else, google it. I'm out.