[Editor's Note: This is sam's second installment of 2012 Spurs Draft Previews. The first is here. - jrw]

As one loyal reader noted, in this series I am avoiding the viral "trade up for Anthony Davis" hysterics that may permeate much of Spurs Nation as the draft gets nearer. Instead, I wish to inform and prepare the sensible fan for realistic possibilities concerning PATFO's sure-to-come wizardry in this year's deepening pool of college and international hardwood heroes. 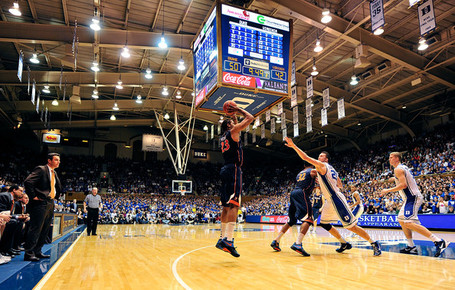 Evaluation after the video...

In the slow-paced Virginia Cavaliers offense, Mike Scott is averaging 18 points and 8 rebounds per game after posting 15 and 10 last year in limited action. For a 6'8 power forward, he has all the offensive tools, including an 81% free throw percentage, 56% from the field, and 30% from beyond the arc. His post game is solid, he has an array of moves when facing the basket, and his pick-and-roll is sublime. Above-average athleticism and excellent court awareness make this prospect very appealing to a team in need of instant offense from the 4.

He has been a student of basketball from the time he could walk, but he has fought through adversity at times in his nearly 24 years. He originally committed to Temple but was granted release from his LOI when John Cheney retired. He played with Jamal Crawford for a year at Hargrave Military Academy in Virginia then saw an opportunity with U of VA. That door seemed to close in the 2010-2011 season when he re-aggravated an old injury, leading to arthroscopic ankle surgery that forced him to miss all but 10 games. He has bounced back to be selected unanimously to the All-ACC First Team, finishing second to UNC's Tyler Zeller in ACC Player of the Year voting but ahead of Tar Heels stars Harrison Barnes and John Henson.

There is no question that Scott can score. His advanced age and experience has gifted him with a wiliness with the ball that should translate well to the next level, according to scouts. When not scoring, he is a very skilled distributor and also moves well without the ball, often controlling his defender's position, thereby setting himself up to receive the ball where he wants it. He doesn't seem to be able to be frustrated by larger opponents either, using his agility and outside shooting to counter-balance his lack of ideal size. He is an excellent offensive rebounder and finishes with a soft touch around the basket. His defensive rebounding is productive, even on a Virginia team full of contributors in that area. 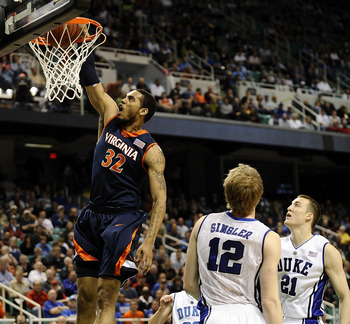 The Spurs need athletic, versatile defense from the 4. Virginia is known as a stingy defensive unit, and Scott is a key cog in that wheel. The fact that he can guard effectively from the blocks to the three-point line makes him a valuable commodity. He doesn't seem to struggle like most undersized PF's when matched up against bigger competition, and he has the feet and and Virginia coach Tony Bennett's defensive schemes have worked wonders for Scott's expansion as a player, and he is the unquestioned leader on that side of the court, as well as offensively. He is the guy vocally motivating and leading his teammates toward commitment to defense in games and in practice.

Overall, Mike Scott could be a potential gold mine for San Antonio. Growing up with a Marine dad and attending Military Academy have produced a man of leadership, determination, and dedication to improving his all-around game. Why is he projected so low? He's 24. He's 6'8. And that's pretty much it. Though it might have implications on DeJuan Blair, Mike Scott could end up in the Alamo City, easing Duncan's inside scoring load and teaming with Tiago to form a solid interior defensive presence. One writer compares Scott favorably to Derrick Williams of the Timberwolves. I see a different skill set, one more reflective of The Mailman, Karl Malone, with his dependable shooting touch and prowess around the basket.

Next up...a shooting guard from the SEC.