Good day PTR! It's Monday, and our Spurs did not fall victim to Linsanity, but they were Lob City'd, Mo'd and Paul'd at home on Friday. Coach Pop sat Tony, which had to account for some of the difference, though. I'll bet he sits again tonight. The Spurs are still tops in the Southwest, and 2nd in the Western Conference. Tonight is their first and only meeting of the season against a young team that is chocked full of talent, but has since fallen on hard times, The Washington Wizards. But beware, even Kobe Bryant couldn't shoot the Lakers out of a slump against these guys last week, as they were Mason'd!

You read that correctly. Last Wednesday night, these Wizards, currently with 9 wins on the season, and their bench on the floor, erased a 21 point 2nd half deficit to beat Kobe and Company. Roger Mason Jr. hit 3 threes, Nick Young threw in 19 points, and Trevor Booker had 17 rebounds. Kobe Bryant contributed a game high 30 points for LA, but was only 9 of 31 from the field in 40 minutes of play. 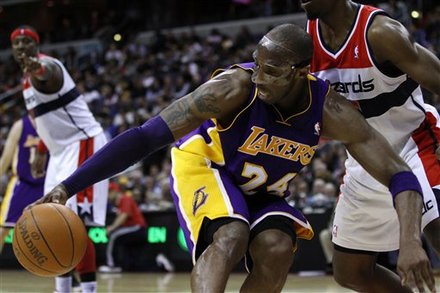 Sadly, that win was probably the highlight of what is sure to be another trip into NBA Draft Lottery Land for the Wizards. The team began the season with hopes that Coach Flip Saunders could get this once proud franchise back on track. Sadly, it was not to be. Saunders was soon given the pink slip and Randy Wittman was handed the reigns. They began the season 0 - 8 before finally beating Toronto for their first victory on January 10th. I wouldn't say that a 15 win season is being too stingy by any means. There have been some close losses, and some blowouts. The schedule from here on out is not very pretty either. Saturday they faced Portland, Monday they come to the AT&T Center, tomorrow they get the Mavs, Thursday the Nooch, Friday the Hawks, and Sunday the Grizz. With the exception of New Orleans, that's five playoff teams in one week's time - a tough stretch for any team, much less one that's been labeled "unprofessional" by their own coach. And all on the road, too.

On the numbers end of things the Wizards are capable of much better, team wise. Individually, they've got some fine young talent. John Wall has a bright career ahead of him. It might not be in Washington, but he'll be one of the NBA's better point guards one day - heck, he is now. His 17 points per game and 7.8 assists (7th in the NBA) are both team bests. On the flip side, only Deron Williams commits more turnovers per game than Wall, a definite difference maker in those close losses. Wall also shoots a low percentage. JaVale McGee is the NBA's number 2 shot blocker at 2.6 per game, and his 8.9 rebounds are a shade ahead of Tim Duncan at 16th overall. The Wizards are 23rd in the NBA in points per game, compared to 4th by our Spurs, a hair better in rebounding at 18th, while our guys sit at 22nd, 27th in assists to our 5th, and next to last in points allowed to our 14th. Our guys have a slightly better field goal percentage, 45.8% to 43.1%. Their three point percentage is only 31.8% compared to our 39.6%. And wouldn't ya know it...both of these teams are dead even from the free throw line at 72.8% - still tied for fifth worst in the NBA. I didn't see the Clipper game on Friday, but I can read a box score. I love ya Timmy, you are the GOAT, but 3 - 11 from the line does not help in losses like Friday's. As a team, the Spurs were 20 - 32 from the free-throw line, and the final score was 120 - 108. You do the math. Keep shooting!

NBA Stats Cube Lineup Comparison Here. Bullets Wizards perspective can be found here: Bullets Forever and Truth About It. Thanks, as always to Hoopdata.

Game Prediction: Tim, Tony and Manu sit the 4th. IF he can go, and if Tony sits, this might not be a bad game to give TJ some minutes. We shall see.

As always Tony must dominate Fisher Wall, and NBA league pass is recommended for those who are willing to pony up the cash. Almost every Spurs game will be broadcast there, which is especially helpful for those of us who aren't in the San Antonio area. Please don't post links to illegal game feeds in the game thread. Links to illegal feeds are not permitted on SBNation, but you can probably find them out there on the internets if you're resourceful and desperate.