Random Scenes from the Clippers Game

Share All sharing options for: Random Scenes from the Clippers Game

Not much to say here, but I did get a few good pics in the Clippers game. Let's start with another pretty dunk by Timmy - not the rattle-the-rim, hang-on-for-dramatics for which Griffin is known, but effective and crowd pleasing nonetheless. 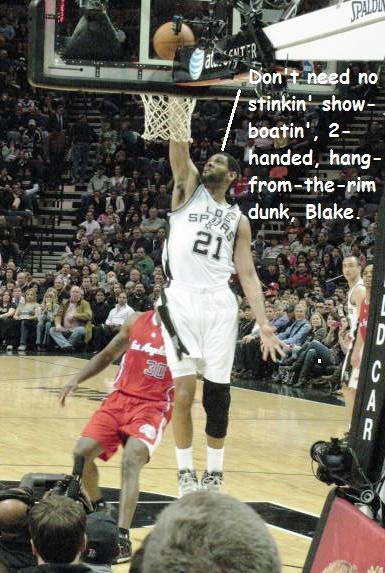 Tiago also had a nice dunk that would have been two-handed had he not been fouled (but converted the free throw). 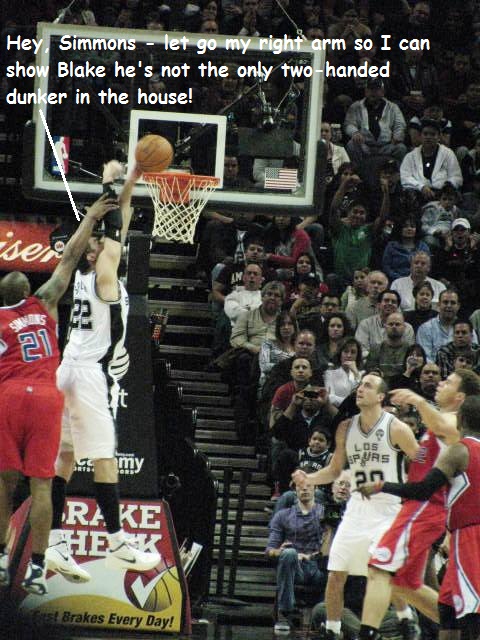 And then there's Blake Griffin - I only remember this one rim-rattler during the game: 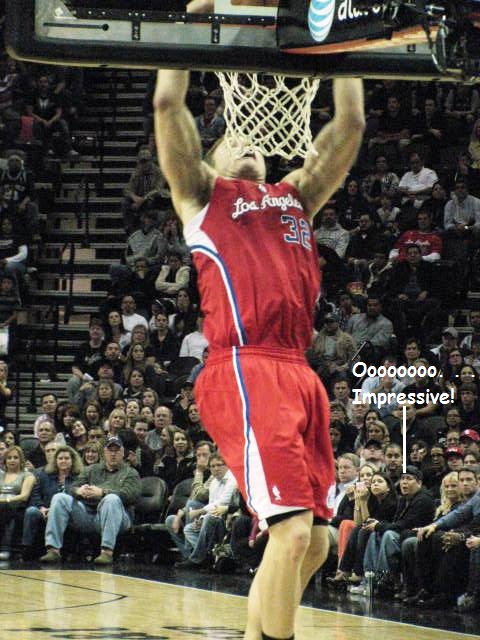 Danny Green wasn't going for a dunk on this shot, but he should get some kind of style points for the position he gets his arms and legs in on the shot. 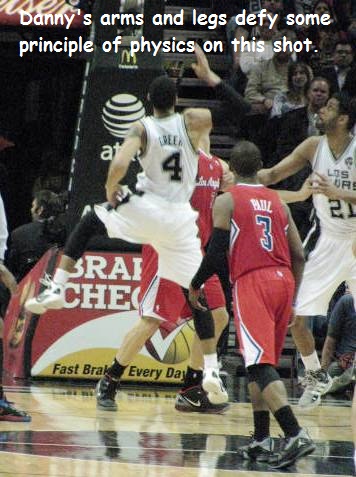 Before the game, Clippers' broadcaster Michael Smith was walking around at courtside, showing off his coat. I think he thought it looked good, but I just wanted to tell him, "Craig Sager called and wants his sportcoat back." 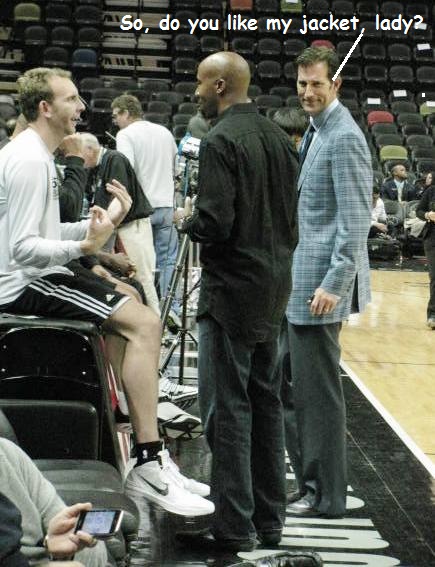 I have watched DeJuan and Timmy carefully during introductions all season. Timmy braces himself sideways when DeJuan's name is called, and DeJuan really just grazes Timmy when he leaps on him. It looks more dangerous than it is. 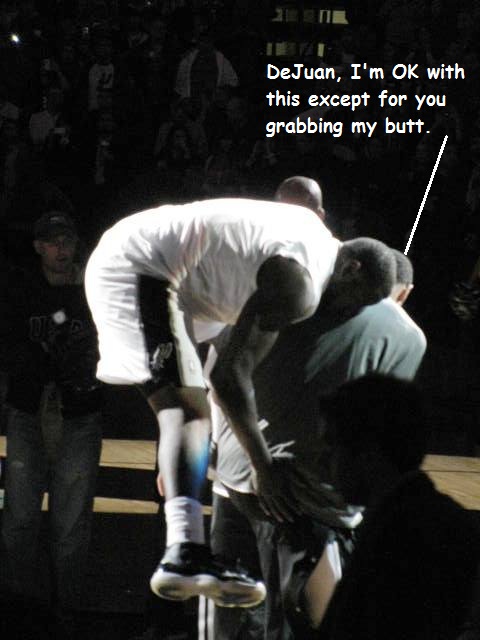 Blake Griffin would airball his first free throw, and clank his second one off the rim. 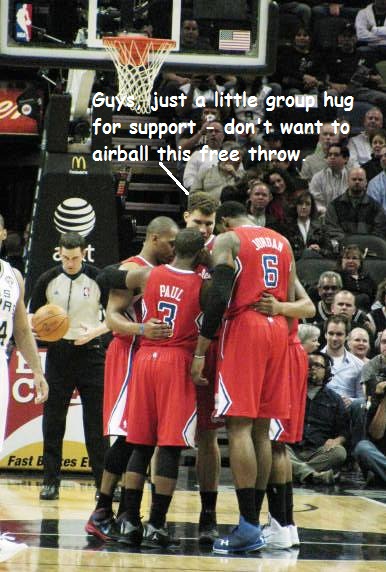 Spurs fans could not laugh long at the free throw problems of the Clippers big man because Tim was going to convert only 3 of 11 from the line for the night. 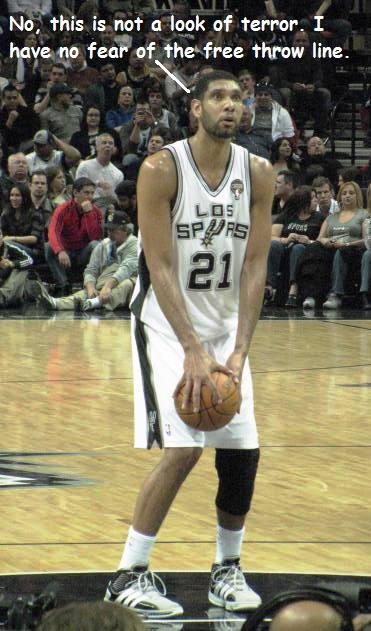 Manu, after wearing a really, really great looking pair of shoes for his return to the court, has now switched to another pair for the last two games. Same shoe, but the color combination on them is - well - not something I like. But if he plays well in them, so be it - he could wear purple and red sneakers for all I care. 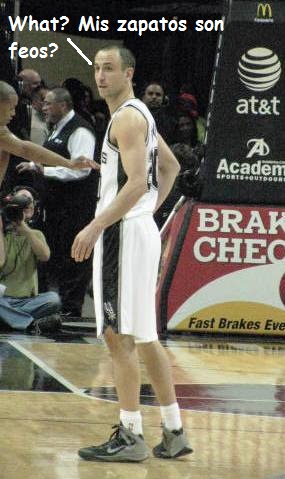 Just a funny picture from the scorer's table: 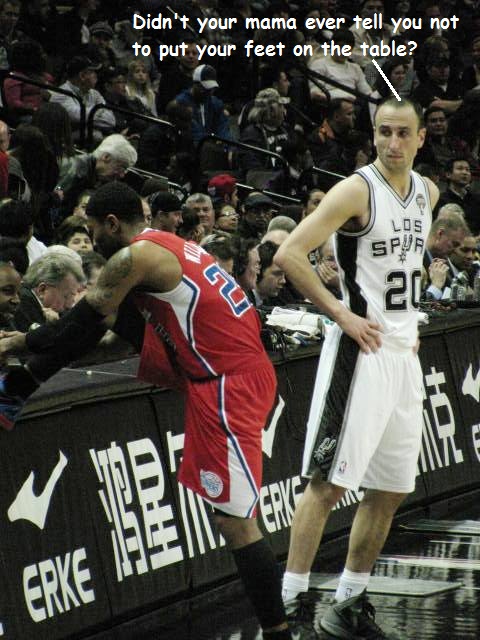 Whose sneakers? And these you can buy on the Nike site by designing your own. 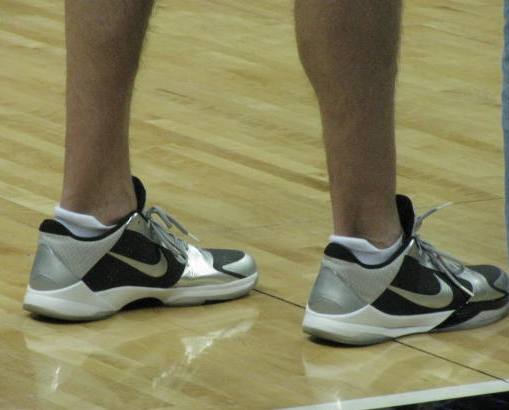 The Spurs paid tribute to long-time season ticket holder, Baseline Bum officer, and super fan Cheryl Haynes during the game. She was very visible at the games, and was a friend to fans, broadcasters, and players. She also had season tickets for the Silver Stars games and the Rampage. She died last Wednesday after battling cancer this past year. 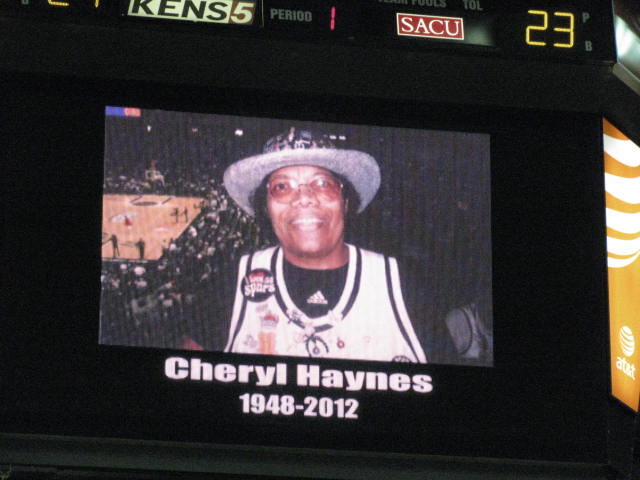