SAN ANTONIO - Chris Paul seemed mad on Friday night. It's unclear if it was the officiating or a result of this, either way he seemed a bit more ornery than usual in the Clippers' 120-108 win over San Antonio at the AT&T Center. But he swore he wasn't. He said he wasn't upset at all, that this was just another game. And he might be telling the truth. But whether he was or not the fact remains: Paul absolutely killed the Spurs.

The largest piece of one of the biggest (and most controversial) NBA trades in recent memory joined forces with Mo Williams to combine for 69 points as the two point guards blew up for 36 and 33 points, respectively, including seven Williams 3-pointers. Mo freaking Williams. When a team's backup point guard lights it up like that the game becomes that much more difficult, especially when your own point guard is a surprise inactive. Gregg Popovich informed the media a little more than an hour prior to tip-off of a right quadriceps injury that would keep the Spurs' All-Star point guard off the floor against Paul, his good friend. One of the league's best point-guard matchups was not to be right from the start.

Given the situation that developed before the game even started, San Antonio was playing uphill all night. With Manu still working back into game shape and a starting unit lacking by far its best playmaker, the Spurs had no choice but to execute to near perfection on every possession. And San Antonio was running its offense quite well, outscoring the visitors 44-26 in the paint and shooting nearly 49 percent. But making only 20 out of 32 free throws can be the difference (and given the score margin, it literally was) and the Spurs just couldn't afford to make mistakes, especially considering the way the Clippers were bombing away. Los Angeles (not that Los Angeles) is a very dangerous team when it's connecting from the perimeter like it was.

And, of course, we all know how dangerous Blake Griffin is, but, more importantly, we know why he's so dangerous. I don't need to bring out stats and numbers to prove to you it's not his outside game that frightens you, it's his insatiable appetite for brutally murdering the rim that makes him one of the biggest stars in the league. And the Spurs had a gameplan ready for Griffin. San Antonio stuffed the lane and played very solid one-on-one defense (against Blake, at least) to keep the big man out of the paint where he feasts on slighter builds and phonebook-thick vertical leaps. His 15 points on 7-for-14 shooting is a result you will take. The Spurs had a gameplan ready for Griffin, but they did not have one for Mo Williams.

Danny Green said as much, as San Antonio knew it would have to defend around Paul's ability to run an offense and Griffin's ability to finish at the rim.

"That was something we didn't factor in coming into this game," Green said of Williams' seven 3-pointers. "He was a key role for them tonight and they hit a lot of threes. They hit a lot of shots."

Yes, Williams is a good player who can take over once in a while - he once scored 44 points in a game against the Suns - but this was a season-high explosion. And without Parker on the floor, the Clippers deployed a small-ball lineup that was problematic for San Antonio. With the only natural point guard on the roster being Cory Joseph, the Spurs were missing their usual complement of fast guys (creative, I know) that give them the capability of running small themselves.

San Antonio was chasing L.A. around all night and they just couldn't quite get over the hump. Despite all the wild shooting stats, the Spurs had a chance to win this one. But their 97-96 lead with 7:57 left in the game was the last one they would have. With the score tied at 103 and the clock nearing five minutes remaining, Mo "Gotti" delivered his most sinister punches. Williams nailed two 3-pointers on consecutive possessions, seemingly draining the air from a Spurs team that had come so close to completing a second-half comeback. Though there were still four minutes left, the atmosphere in the arena all but told you it was over. Those 3-pointers were daggers.

But it was that way all night as Los Angeles shot a stifling 14-for-27, 51 percent from the arc. As Spurs fans know, that kind of stat is generally one you'll see on the winner's side of the box score. We know the kind of damage a 3-pointer can cause, especially when the timing is just right. They can be backbreakers and momentum-killers, and Williams certainly did the damage on Friday.

What a difference two weeks makes

It doesn't seem that long ago San Antonio was coming off an 8-1 RRT and things were all well and good in San Antonio. While this homestand hasn't exactly gone the way the Spurs had hoped, there have been some extenuating circumstances. Given the integration of specific players back into the lineup and then back out of again, and then back into again a jelling period is expected. And we're still at a point in the season where the Spurs theoretically have plenty of time iron things out. It just all comes down to health. Parker is not expected to miss much time and T.J. Ford is day-to-day after his scare the other night.

But there isn't a casual attitude about any of this in that locker room. Players were not happy or OK with that loss. They know this is a crucial part of the schedule, a portion where they find themselves at home for seven straight games. With a 2-3 record at home since the All-Star break, the next two games at home against Washington and Orlando are imperative to finding rhythm on both sides of the ball. The Spurs haven't even had to deal with either one of their two Triple Lindies, so the road ahead gets no easier. Not in this year's NBA.

So while we continue to wait and see, we can only continue to envision what this team will look like if and when it fully comes together. In the mean time we can only speculate. I do believe if Parker had to go he would have been able to play, so this was probably a case of Pop protecting the players from themselves. Not saying he pulled one of his classic Pop "rest" games, but we know how important health is to this team come the end of the year. And really, right now, Parker is so ingrained within the offense there shouldn't be any concerns over skipping a single beat. But there is one big positive the Spurs can take away from this game. If he's not all the way back, Manu Ginobili looks pretty darn close. 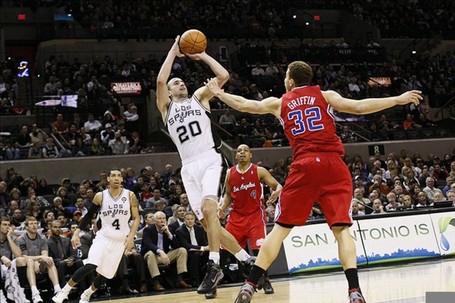 Ginobili is almost there. If it weren't for the fact he's been insisting post-game he's not quite back as far as conditioning goes, I'd have declared him back already. His shooting efficiency has been amazing for a guy who's missed so much time and his passing is right on point. But when you stop and really think about it, his explosion to the rim isn't quite there, yet. And I'm not talking about the Ginobili of old, as we'll never see the 28-year-old version again, but he's lacking just a bit of that first step. Hopefully that burst and Tony Parker will fully return at the same time.

What a night. He absolutely couldn't miss. He got several good looks throughout, but he made the most of his opportunities. It might seem ludicrous to make him second, but a lot of what he did was a result, both directly and indirectly, of another guy.

CP3 was his normal self, prodding the lane, pulling the ball on a string in and out of defenders' reaches, finding teammates, hitting tough jumpers and disrupting the opponent's offense. When he plays with the kind of edge he seemed to have on this night, there isn't a better point guard in the NBA.

Worth mentioning: Danny Green and Gary Neal each played well for the Spurs once again as they continue to contribute when called upon. Neal finished with 18 points, including a career high 10 trips to the line, while Green went for 16 with 3 steals. Tim Duncan was solid once again from the floor, but he hit just three of his 11 free throws in the game. He still finished with 17 points. Also, if someone can find San Antonio's record while wearing the "Los Spurs" I would be interested in the results. Those things aren't doing the silver and black any favors right now.