NBA Trade Deadline: Will the Spurs Make a Move?

Share All sharing options for: NBA Trade Deadline: Will the Spurs Make a Move?

SAN ANTONIO - The Spurs are a notoriously quiet organization when it comes to rumors around the trade deadline - both in action and conversation. And this year appears to be no different. Tom Ziller of SB Nation wrote yesterday of the Spurs' current situation and some avenues they might choose to traverse as Thursday's 3 p.m. (EST) deadline approaches. And as he explained, San Antonio's options are limited.

Right now the Spurs' biggest need is obviously another big man to supplement the frontcourt rotation. A long, rangy "stretch 4" would be ideal for a team lacking athleticism at the position, but finding one on the free-agent market or in a trade scenario is more easily said than done given San Antonio's current salary cap situation and the high demand for players of this nature.

Because the Spurs are over the luxury tax threshhold and are close to the $74-million mark, they are unable to throw anything more than a mini-mid-level exception - roughly $3 million - at anyone in free agency. And with a very small trade exception - a little more than $800,000 - San Antonio must basically match salaries or find a team with significant cap space in any potential transaction.

But as Gregg Popovich said prior to Wednesday's game against the Knicks, don't count on anything major going down at the deadline.

"We rarely do anything ... just going to fall asleep during trade deadline," Pop quipped. "We all get in one room and we just get our pillows out and we go to sleep."

All joking aside, he clarified if the right opportunity comes along you have to take it.

"The trade will get made if it makes sense," he said. "If whatever that change is ... will help your team be better for the playoffs and the future, then you go ahead and you do it."

Information surfaced a couple of weeks ago about James Anderson's wish to be traded. And while he seems to be the most expendable piece given his request and the significant depth the Spurs have on the perimeter, his performance on the court and relatively small salary - just more than $1.46 million - will make it difficult to get much value in return. Unless PATFO turn up some sort of diamond in the NBA rough, the Spurs just don't seem to have the assets or available cap space to make a hugely significant move. At least it seems that way.

Assuming the Spurs' untouchables are Tim Duncan, Manu Ginobili and Tony Parker, with Tiago Splitter, Kawhi Leonard and Richard Jefferson (who's unable to be touched less because of being irreplaceable, and more because of the insanity of his contract) falling very close to the same category, Matt Bonner and his $3.3 million salary looks to be the most valuable piece going forward considering Danny Green, DeJuan Blair and Gary Neal are each making less than $1 million this year. As Ziller talked about, packaging Matt Bonner - who's on the books through 2014 - with another prospect or asset could land the Spurs a potentially respectable player, but would trading Bonner really be worth it, especially considering the aforementioned players San Antonio seems less than willing to part with? Would the return offer more value than the Red Rocket's shooting ability does in Pop's system? It doesn't really seem like it. Having said all of this, let's take a look at a few potential trade or free agent candidates.

This one got a bit of publicity at certain points over the last month, but, as the folks over at At the Hive talked about, it's a trade scenario that doesn't seem to have very strong legs. Don't count on it happening, Spurs fans.

Trade rumors have cropped up recently surrounding the young Bucks forward, and he's the kind of guy San Antonio could absolutely use. The 24-year-old native of Turkey is long at 6-foot-10 and very active. His rangy shooting ability (37.5 percent 3-point shooter) and propensity to get on the boards (nearly nine rebounds per game, 18.8 percent total rebound rate) would be a huge asset to the Spurs. And his $2.5 million salary actually makes him attainable. 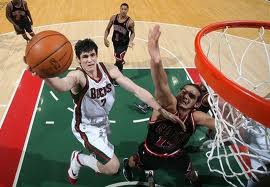 Milwaukee has enough cap space to bring on some salary in return, but would San Antonio be able to send a package the Bucks would be interested in? Would the Bucks consider dealing him to anyone after the run he's been on since Bogut's latest injury? Even with his manageable salary, it's still too high for the Spurs to package any one or two of its young breakout players who also carry compelling value. And even then, would San Antonio be interested in giving up two or more key rotation players for a guy with just a year left on his contract and seems destined for a pretty decent payday in free agency? If the Spurs were able to acquire him, would they even be able to retain him without going too far over the luxury tax threshhold in the off-season?

To me, it goes back to James Anderson. Let's say the Bucks are willing to trade Ilyasova and are open to taking a chance on the young swingman's potential, Anderson's salary would allow for the Spurs to send a package involving him and one other player, whether it be Blair, Neal, Green or whichever Spur you want to throw in here. But again, is Ilyasova really worth trading the type of chemistry these young Spurs have developed? He's a good player with a pretty high ceiling and great versatility, but I don't know if it'd be a move that would put the Spurs over the top, not to mention set San Antonio up well for the future given the impending expiration of Ilyasova's contract.

Things shockingly aren't going so well in Charlotte for Tony's fellow Frenchman. He has apparently worn out his welcome and might be close to reaching a buyout agreement to allow the Bobcats' power forward to seek employment with a team with more than five wins a contender. Given his relationship with TP, one might wonder about the possibilities of Diaw landing in San Antonio. He's currently on the books for $9 million and his contract is expiring (which raises a concern over free agency similar to the one we outlined with Ilyasova), but he could be willing to sign with the Spurs for the mini-MLE. Of course, this is just speculation as I have no clue what his interests are, but the ability to acquire someone with his talent level without having to give up anyone in a trade would be more than worth taking a look at.

Having said all this, Diaw could be traded before the deadline so Charlotte gets at least something in return for the big man. That would take San Antonio out of the running completely. 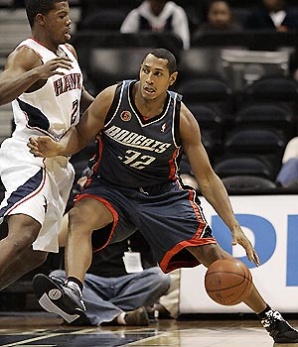 So while it's pretty unlikely Popovich, R.C. Buford and Co. will simply hold a slumber party on March 15, we can probably assume the Spurs will be their typical quiet selves come the deadline. But we'll see what the next week brings, won't we?

Do you have any ideas of your own? Try your hand here to see what kind of deals you can find for the Spurs.