Share All sharing options for: Why Gary Neal is a better back up point guard than you think

With Manu Ginobili and T.J.Ford injured, the Spurs experimented with players in positions that were not their ideal ones if we are basing our assessment by traditional definitions. Kawhi Leonard and Richard Jefferson, each considered small forwards, spent time at both shooting guard and power forward. Gary Neal, a shooting guard, played point guard. Danny Green went back and forth between wing positions and even took a crack at playmaking a time or two. While enough has been written about the positional revolution to make these small adjustments seem less than frightening, a lot of fans who still cling to traditional positions as a framework have struggled to accept that is not about what a player is called when the starting lineup is announced, but what skill he brings to the table that's important.

In today's NBA, wing positions have become interchangeable, especially when it's a SF sliding down to SG. We've seen 6-10 guys like Paul George and Donte Greene guarding shooting guards and it's not uncommon for teams to switch defensive assignments according to match ups. Similarly, playing a big SF at power forward in order to create a "stretch 4" is standard practice among NBA coaches. While most fans are OK with these adjustments, that's not always the case when players that would traditionally been considered shooting guards play the point.

"Combo guard" is a damning label when it comes to NBA players-the kind that can hurt a player's draft stock or reduce him to journeyman status. It's often used to refer to guys who play a with a scoring mentality but don't have the height to play shooting guard while having implications of defensive ineptitude at both positions (too short to guard average shooting guards, but too slow to cover poing guards). Over the last few years, the league's combo guards have evolved in terms of quality. As a result, the scorn that used to accompany the label is mostly gone. I said mostly because there's still a significant contingent of people that remain unconvinced of the viability of players that seem stuck between positions. The would be "Pure Point Guard Preservation Society" often scoffs at the notion of a guy who lacks the vision or elite ball handling skills of a point, playing ahead of a traditional floor general, ignoring the contributions of the combo guard just because he doesn't fully fit the traditional description.

Which brings us to Gary Neal and "The Gary Neal Back-up Point Guard Experiment". At 6-4, Neal lacks both the height of a prototypical shooting guard, and the foot speed and court vision needed to play point. His most valuable skill is without a doubt his shooting, so joining a team that had Tony Parker, Ginobili and fellow combo guard George Hill, Neal played off the ball most of the time. Hill's departure, and the injuries to Ginobili and Ford, forced Pop to play Gary more time at the point, which lead to fan responses that ranged from skepticism to downright despair. Neal had showed a penchant for running the pick and roll in his time in Europe but he had been wildly inconsistent as a playmaker in his first NBA season.

To the surprise of most of us, Neal has done a remarkable job as a secondary playmaker. While his shoot-first instincts may kick in a little too often, he's managed to strike a balance in terms of assisting his teammates and looking for his shot. Basketball-Reference shows that his assist percentage of 14.0 is a marked improvement over his last season's 9.0% mark, but his turnover percentage has only seen a small spike, from 10.3 last season to 10.7 this season. While his increased usage hasn't hurt his playmaking efficiency, his shooting numbers are down from last year. Part of it can certainly be attributed to the fact that he had to recover after his appendectomy, part is surely due to the fact that he's shooting fewer high-percentage spot-ups than he has in the past, and part to the fact that without Ginobili, open looks are harder to come by.

Aside from the statistical evidence of Neal's ability to contribute to an offense as a playmaker, the anecdotal evidence is also there for anyone who looks intently. The Nail's chemistry with Tiago Splitter on the pick and roll is undeniable and, while being a confident shooter not afraid to take big shots himself, Neal has been really adept at reading what the defense is giving him and making the extra pass. 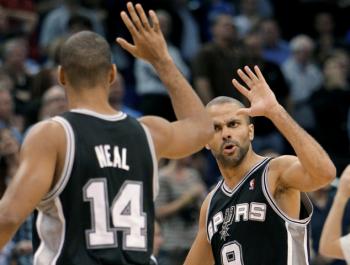 Tony is impressed with Gary's improvement. Why aren't you?

Even with all the evidence supporting the fact that Neal can play the part of point guard effectively, a lot of fans are still clamoring for him to return to being a shooting guard full time. The fact that he doesn't look like a traditional point guard is too much for some die-hards to overcome. With the return of Ford, Gary Neal is expected to go back to playing the position he is best suited to play, the position in which he is supposed to be the most valuable. The problem with that line of thinking is that it relies on "the eye test" or preconceptions on where a player should be the most efficient based on outdated positional designations. The stats show that Neal has actually been remarkably more efficient as a point guard than as a shooting guard. 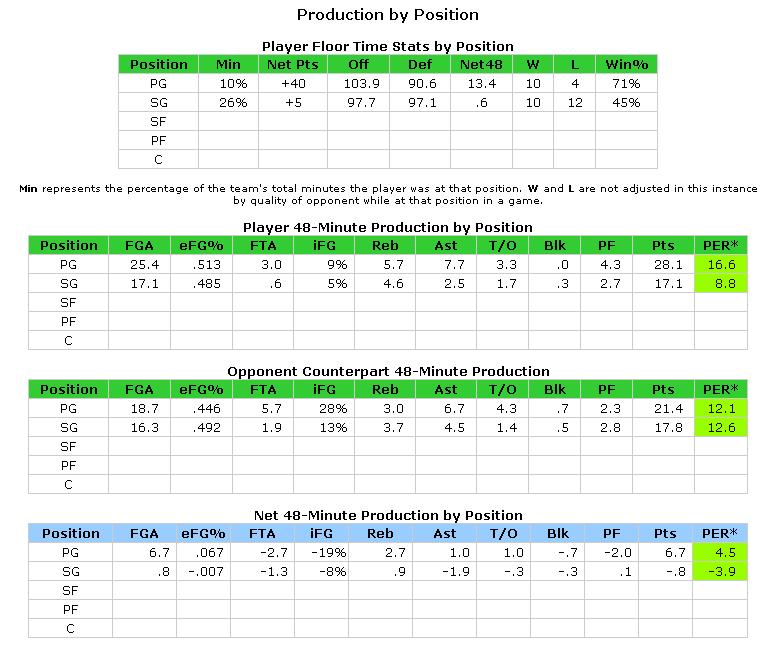 Pretty much every stat supports the idea that Neal is thriving in his new role as a back up PG. He is scoring more, he is shooting better and his assist numbers are better than his counterpart, which is usually a traditional point guard. While he allows more points and fouls more while playing against opposing trigger-men, his oppenent's field goal percentage is lower and their turnovers higher when compared to the assists. His PER doubles when he's playing the point while his counterparts' lower. Simply said, his net production is better when he plays point guard.

It is impossible to ignore the fact that he has played less minutes at the point than as a shooting guard, but the numbers don't lie. While at first it might be hard to reconcile what we see on the court and what the stats say, once the initial shock wears off, it's not that crazy. Neal's ability to pull up off the dribble is maximized when he has the ball in his hands more. Defenses have to respect his range when he is the pick and roll ball handler, which opens space for the roll man. When the defense plays him close to try to take away his shot, he takes advantage and drives to the rim.

I'm not trying to say Neal should be moved to back-up PG full time or that a guy like Ford has no value to the Spurs. Ford's ability to read defenses and his elite ball handling are an asset for sure, and his steady hand is a blessing when sharing the court with younger players. But both Neal's alleged incompetence as a point, and Ford's value on the court seem to be overstated by most fans. It's hard to say if Neal is going to be able to maintain this level of play or if Ford will pick up where he left off before getting injured, but what's certain is that we should all be more wary of relying on the eye test as it applies to Neal. Whether a player is a Pure Point or a Combo Guard shouldn't matter; all that matters is whether he can contribute or not. And Gary Neal, like George Hill before him, has showed that he can.