[Editor's Note: This is the second installment of the serialized story The Device, by DewNo and myself. The first is here. -jrw] 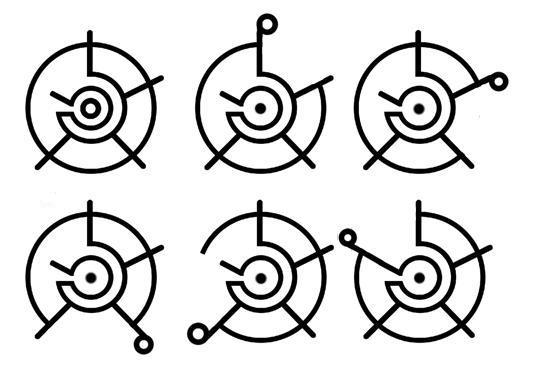 Part 2: The Glyph and the Riddle

Tim Duncan sighed as RJ stood outside his hotel room's door, knocking and yelling. Richard Jefferson - or the more familiar "RJ," as he was known - relished the opportunity to be the more responsible one for a change. It was true that Tim the Attentive Franchise Player had overslept for once, after all. Tim let RJ have his fun.

"Sheesh, RJ, just a minute! We can't all be perfect like you!", Tim deadpanned with inner glee.

"Aw, dag-nabit," RJ answered, with the sadness audible in his voice, even through the door, making it clear he'd caught the irony in Tim's statement.

"Whoops," Tim thought. "That blow to his self-confidence could take weeks to undo. Unless..." Sighing again, Tim challenged RJ to a corner-three-shooting contest at "high noon". That was a competition Richard would win every time, or at least Tim hoped. Making such an offer was not out-of-character for Tim, but since he wanted to obscure the blatant purpose of the contest as a boost to Richard's self-esteem, he added some fake machismo. "Heh," Tim quietly half-chuckled with pity, all of it inaudible to Richard. Tim had actually created hundreds of these put-on competitions (all of them at "high noon") over the years, all as instinctive (and usually unnecessary) attempts to include and bolster his teammates. Only in these moments would Tim wear sunglasses, to conceal his lying eyes.

"Alright, yeah! In your face, TD!" RJ muttered happily to himself as he practiced his corner-threes.

Tim picked up a dry two-thousand-page tome entitled "Every Play Ever Run in the History of the NBA". Somewhere between molding goldleaf bible and coursework-printout binder, the impressive book was one of the few of its kind in the world. Tim cherished the tome, having read it in full at least fifteen times and having consulted it far too often to submit to any kind of a count. He'd intended to read through this book once more before noon today, but because he'd overslept, he wouldn't be able to. Sighing, he found a bookmark on an especially worn page about halfway through. "I guess I only have time for half today," Tim said with disappointment, adding a chapter to his load for good measure. "I just wish I hadn't overslept." Tim instinctively looked up for a moment; a distant expression on his face while he stared at the ceiling as though he'd just made a mistake on defense.

"Well, what's this?" Tim said, his eyes tracing over a glyph on the ceiling. "It's..." Tim trailed off and looked down at the chapter, entitled "The Triangle". On the very page he was reading and on the ceiling -- the same glyph. Tim knew he shouldn't say anything out loud, but couldn't seem to stop himself, "The five-sided triangle. Mathematically perfect basketball. Someone nearby is using the Triangle." Tim called RJ and told him he'd have to take a rain check on that corner-three contest, and then, without interruption, read the 200-page chapter again and again, not out of relish or care but out of necessity.

Tim Duncan had not overslept.

If he were being honest, Richard would say that he frankly felt no disappointment at the other end of the cellular telephone about this rejection of midday competition, while he paced around the corners of the court, shooting threes indifferently. He thought, "To have a competition of my greatest strength against his greatest weakness... Should one even call such a match-up a "competition"? What sort of stock, then, should I have put into it? Indeed, what should I have gained from either victory or defeat, knowing that even in our capacity as players we are not judged by our society by how we perform in such match-ups, but in how we perform in the public spotlight in the structured game of basketball. But why indeed should we see ourselves as somehow more or less significant on either account? Do such command performances even mean anything besides themselves?"

Richard mused and supposed with detached thoughtfulness that his friend Timothy ("Tim" or "TD", as Richard would call him) had been trying to bolster Richard's self-confidence with his offer, as a gambit in the larger game of playoffs and titles. While he respected Timothy's efforts as well-intentioned, he recognized that Timothy did not (could not) know the inner forces of doubt - in self, in others ... in everything - that was the genesis, the totality of Richard's previous failures. Tim could not see the eye of the storms of light, could not see its awful shape, could not see the diabolical glowing triangles that formed the proverbial cap on the legendary two-liter tornadoes that they called the storms of light. Three in number, at least one behind every meaningful storm. Tim may have insight and wisdom here on Earth, but he could not see the blood clotting the feet of those who walked on razors...

Interrupting his meditation was a rolling basketball, skimming past his feet and bounding off the wall and slowly returning just out of his reach.

"Aw, dag-nabit. Lost my train of thought," Richard said, instantly and permanently reverting into the self-deprecating comic archetype which he had, until that day, embodied with glee.

Permanently reverting -- or perhaps just for the next ten minutes. Manu sat in his room at the hotel and dusted off his cell phone. "Dag-nabit, where am I?" Richard Jefferson said, oblivious to the cosmic forces guiding his existence that day, "How did I get here?"

Then, while standing in front of the mirror in the locker room, polishing his shaved scalp with abandon, burnishing it until it shone like the top of the Chrysler Building, RJ -- clad in his Arizona jumpsuit and hoodie -- suddenly felt more powerful. He picked up a hand mirror and examined the back of his head just above the cut of the hoodie. He first noticed an equilateral triangle at the base of his skull, tilted with the shading to the bottom right corner. It was a mark that symbolized power, with the subtle hint of a glow. In the hand mirror, thanks to his vigorous skull-buffing, Richard Jefferson now beheld an infinite series of mirrors, each iteration distorting and magnifying how powerful RJ appeared to himself. The mirrors stretched out forever, and his contemplation drew out the boundaries of the domain he conceived himself reigning over. Sensing that mastery was within his grasp, he relished the power he saw.

Manu was punching keys in the bottom right of his mobile phone and RJ was punching out the mirror hundreds of feet away.

Before the game that night, Richard took a thousand shots, hitting only 980 of them but feeling as though, looking back on his practice session, he had hit every single shot. Richard Jefferson's affectionate eyes had become black marbles like those of a bunny, and yet somehow murderous in aspect.

Tim, still feeling bad about putting Richard off about the corner-three contest, apologized again to Richard as the other players went through their pre-game rituals. He expected a disappointed, but forgiving, RJ to turn, laugh, and chastise Tim for trying to get out of a loss. What he didn't expect was silence, total and meaningful.

Richard was wearing a hoodie and never quite opened his eyes. When Tim asked if he was alright. Richard awoke with a smile, "I'm more than alright, Timmy. More than alright. I think I'm going to have a wonderful night. Wonderful."

Tim smiled at his friend's absurd response. Richard always knew how to make you laugh. "That's... that's pretty chill, Richard. I was just going to have an awful night, but you know now that you mention it, that's a good idea. I'm going to have a good night too," Tim deadpanned.

"I think I could go for 40 tonight," Richard was still smiling, eyes unmoving.

Tim played along. "Don't break the backboard off the stanchion, Richard. And save some for me! I want at least 30 of the leftovers! Heh."

During the game, Hubie Brown - the color commentator for the night - tried to put the game into perspective: "Okay, now you're Richard Jefferson and you've taken fifteen shots for forty points. Alright, when you're Richard Jefferson, you have to be pleased with the production you're getting from the small forward position, that is, yourself. When you're hitting 76 percent of your shots, then you know that you're having a great game. When you're breaking the backboard off of the support, you know you're having a tremendous time at the rim. Shutting down the reigning MVP, you've got to be pleased with that on the defensive end. Now you're Tim Duncan, and you've got to be surprised at Richard Jefferson's production. You've got to see those bleeding, voided sunsets that were eyes and the rebounding disparity, and you've got to be happy about keeping the Bulls to one shot every time down the floor."

"Great game, Richard!" Tim Duncan said, trying to initiate a conversation for the first time since the beginning of the game.

"What's that? Oh, did I win the corner-three contest? Where are we?" Richard asked, not comprehending.

They were all leaving the arena in shock, having decimated the Bulls with RJ's inexplicable 2nd half, when Manu surreptitiously put his phone away.

"Hmm. So that's what Manu's hiding," thought Duncan in full-on detective mode. Manu turned around and found the captain's magnifying glass-like stare from the corner of his eye, his powers of deduction as sure as his bank shot. Manu did not waver, but picked up his bag and left the locker room.

Later, while visiting Manu's hotel room, Tim decided on the direct approach. "I saw you using the Triangle the whole game," he said. Manu's face was impassive, dubious, guileless. Both were silent for a time. Tim spoke again "There's a glyph on my ceiling, Manu."

"Well, I'm injured, and I have it," Manu said matter-of-factly. "What do you expect me to do? Not use it? I play to win. You know who I am. What's the harm in using it? RJ seemed pretty happy when he came to. Sure, he wasn't in great shape for the postgame press conference, but it seemed a safe way to try out."

"Manu, I don't know who gave that device to you, but it's incredibly powerful. Far more powerful than you know."

"The doctor gave it to me. I thought you knew that. When I got the injury," Manu explained, expecting to put an end to it.

"Which doctor, Manu? What's his name."

For the next ten minutes, Manu answered every question Tim asked of him until Duncan had a clear mental image of the man, down to his posture and his ambling gait.

"There's never been such a man employed by the team since before my rookie season," Tim said as he looked up and squinted his eyes as though he could stare through the ceiling to perceive an answer to this riddle in the darkness beyond.

"What? How could that be possible?"

"Manu, how many titles have the Spurs won since I came to San Antonio?"

"Yeah. See, this is just what I'm talking about. Heh."