State of the Spurs: Making Sense of the Winning

Share All sharing options for: State of the Spurs: Making Sense of the Winning

This is the fifth installment of the State of the Spurs series, and this is going to be the most difficult one to write. It's very easy to analyze what's going on with teams when they are losing, but it's much more difficult to point out what exactly is going right once they start winning- especially to be able to do so without sounding like an absolute homer.

The truth, though, is that we have reason to dance, and if you don't dance, well, you're no friend of mine. 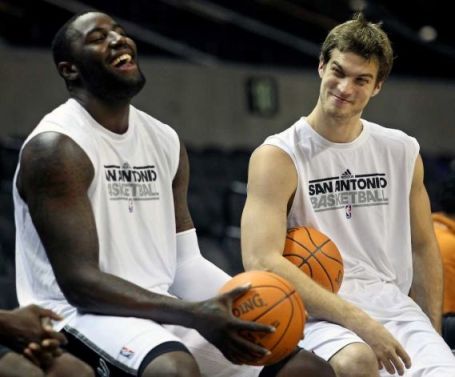 They dance when they want to, they leave the world behind...
via spursworld.files.wordpress.com

I think it's fairly obvious to most everyone following the team closely that the Spurs have raised their level of play over the past two weeks. If I had to pick a particular game where we turned a corner, it would likely be the infamous game in Dallas where the Mavericks nearly got bench-slapped. The defense had started to improve a couple games prior, but was inconsistent.

Now, the defensive improvement seems like it is here to stay. We just held Philadelphia, another team that ranks in the top 10 in offensive efficiency to under 100 points. We did the same to Oklahoma City. Even by advanced metrics, their offensive efficiency was significantly worse playing against us than it usually is. Specifically, I continue to be impressed with Kawhi Leonard and Danny Green, and also need to note that Matt Bonner (and to a lesser extent, DeJuan Blair) have taken a break from being absolute sieves defensively and are coming dangerously close to holding their own. Their defensive ceiling will always be lower than that of Tim Duncan and Tiago Splitter, but Bonner continues to be almost always in the right spot and Blair has scaled back on his reaching and been in position to take 5 charges over the past two games (only two of the calls went in his favor, however).

Offensively, everyone is finally showing up (Green's recent 10-47 slump notwithstanding). From a statistical perspective, it's the same story as our defense. Philadelphia and OKC are both top 10 defenses (when did the 76ers get this good?!?) and we made their defenses look average at best. If one of our shooters isn't hitting (recently, it's been you, Richard Jefferson) the other ones are. RJ has a cold night? Gary Neal and Bonner step up and knock'em down to keep the floor spread for Tony Parker. Tony has been playing out of his mind, and I've enjoyed watching him dance around screens, crossing people over, and stepping back to hit jumpers in defenders' faces. Every time he does it, this song starts playing in my head:

Not only does Tony's near-MVP-level play give us reason to dance...Manu Ginobili is supposed to return Saturday against the New Jersey Nets. This is nearly perfect timing. The Nets are the first of three ganes that figure to be rather easy games to get Manu back in game shape before the Rodeo Road Trip hits its tougher stretch and we head to Utah, Portland, and Denver. And if that doesn't make you dance, well, you just might get left behind.

Next week: I'm going to be taking a look at the efficiency of our various 5 man units. We should have big enough sample sizes by then to make for adequate analysis.