Expectation vs. Reality: In defense of Richard Jefferson

Share All sharing options for: Expectation vs. Reality: In defense of Richard Jefferson

When the Spurs received Richard Jefferson from the Milwaukee Bucks for Bruce Bowen, Fabricio Oberto and Kurt Thomas, the trade was billed as one of the more lopsided of the post Gasol-to-the-Lakers era. Spurs fans rejoiced and fans of other teams cursed their front offices for not pulling off similar trades.

Needless to say, the trade was not the resounding success we thought it was going to be. The Jefferson the Spurs got the first year was nowhere near the offensive force most expected; he struggled with his shot and seemed passive and lost, while Pop couldn't really find a way to integrate him into the flow of the team.

After that disastrous first season, he opted out and was resigned for less money and more years in a move to avoid the luxury tax. While he seemed much more comfortable his second year wearing the Silver and Black (which prompted the coining of a new nickname RJ2.0) he still hadn't turned the Big 3 into the "Big 4" like the more optimistic of us were hoping for. Instead, he was just a role player. A good role player to be sure, but not the kind of high usage offensive weapon he had been in his first 8 years in the league. After a good regular season where he rebounded well and shot the ball at a career-high level from 3-point land, the postseason arrived and he, along with the rest of the team, struggled to make an impact in the playoffs. Which brings us to this season and to the point of this article:

Richard Jefferson is getting a lot of flack for his play this season and I'm here to tell you that he doesn't deserve it.

All stats courtesy of Basketball-Reference. Glossary: eFG%: a stat that takes into account that a 3-point filed goal is worth more than a 2- point filed goal. TRB%: Percentage of available rebounds a player gets. Usage: percentage of possesions a players uses when on the floor.

First I need to say that when it comes to playing the BLAME RJ game, I've been as guilty of this as anyone else. But recently, I started reevaluating my position as this year's discussions raged (ahem) in the comment section. The most common criticism directed at Jefferson, and one that I've personally harped on, is regarding his passiveness on offense. But before I tackle the biggie, I want to deal with the secondary gripes regarding his rebounding and defense.

Jefferson's rebounding has taken a dip this season (6.7 TRB% this season, down from a 7.1 TRB% in 2011) but that's easily explained by Kawhi Leonard's elite rebounding numbers (12 TRB%). There's a limited amount of boards out there and other players are getting a large share of them; more importantly the Spurs still are a good defensive rebounding team and that's really all that matters. RJ was never a particularly good offensive rebounder to begin with but when you are parked behind the 3-point line on most plays, and have to sprint back on D to cover for a penetrating guard, it gets harder to get boards.

Similarly, defense was never RJ's calling card but it's clear that he tries. He is really inconsistent on that side, mixing good possessions with late close outs and missed rotations, but then again the Spurs knew that he was far from a Bruce Bowen clone. It's true that his defensive rating (105) is the worst of all the starters, but it's actually quite close to Tony Parker's (104).

In those areas, Jefferson seems to be who we thought he was when the Spurs traded for him. There was not a marked improvement but he didn't entirely disappoint either. The surprise for most of us fans was the way his offense transformed in his second season. So now that the other stuff is out of the way, let's get to that.

Unlike his other teams, the Spurs don't really call plays for Jefferson consistently. No ISOs, no post-ups, not even a 1-3 pick and roll in order to create a mismatch and let him exploit it in the post; he sometimes comes off a screen for a jumper or an alley oop but that's it. His usage percentage in the last two season has seen an almost 10% decline from his Milwaukee years. There's really no way for RJ to be more aggressive on offense other than going rogue and breaking up a play and taking over, which I guess he could do as long as he doesn't mind Pop yanking him so fast that there would be a Jefferson-shaped dust cloud on the court. If there's one thing Pop abide, it's when players are not doing what they are supposed to. He benches them and yells at them until he is red in the face. If Jefferson wasn't doing precisely what the offense calls for, he wouldn't be playing 30 minutes per game; which is the second most of any Spur, behind only Tony Parker. 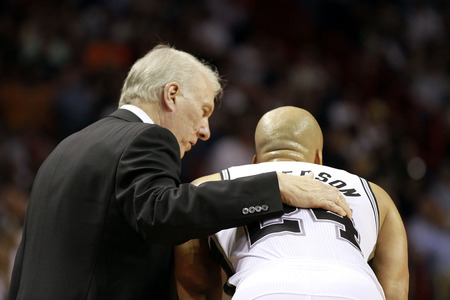 Since coming to the Spurs RJ has been asked to do two basic things on offense: 1 - park his butt in the corner, wait there for the kick-out and take the open shot, or 2 - go to the corner, throw an entry pass to the post and cut to the basket. And guess what? He has done just that -- and he's handled his first responsibility as well as anyone in the league.

Offensively, Pop relies on Jefferson to do one thing and one thing only: space the floor. If you are wondering if he is at least any good at that, the answer is a resounding yes. His 3pt% of .443 is good for 19th in the league and his eFG% of .555 good for 14th in the league. The guy has been the Spurs' most reliable shooter this season by far.

So why is a player that does exactly what he is asked to (and does it well) being called out by the fans? Because his name is Richard Jefferson and he's making over 9 million dollars this season.

We, and I'm including myself here, simply can't seem to forget about the All-Star we were supposed to get and instead we focus on the good role player we have. That's really the issue here: will we accept that the Richard Jefferson we have is nothing more than a good role player? We are letting our high expectation for him and his high salary stop us from appreciating what he actually provides. By comparing our Richard Jefferson with the Nets or Bucks versions, we are ignoring a fundamental fact: RJ transformed his game to fit the Spurs' style at Pop's request. He is no longer a machine gun; he is a sniper rifle.

Now if you get past the fact that his salary is the 4th highest in the team and disregard the the way the "old" RJ used to play, it becomes clear that the player I spent the last few paragraphs describing could be considered a solid starter; an elite shooter that is neutral at worst as a defender and rebounds reasonably well for his position. Some people have compared this version of RJ to Michael Finley and I don't think they are far off. Where the mistake lies is in thinking that's a bad thing. The Spurs won a championship with Mike Finley as their starting 3 and I don't think it's wrong for Pop to want to replicate what the Zombie brought to the table. We just have to remember that it's not RJ's fault that the front office overpaid for him.