Welcome home Spurs and Spurs fans! Let's extend a warm congrats to the boys in Silver and Black on highly successful showing on this years Rodeo Road Trip (and in TP's case, the All Star Game, as well), as they return home for a seven game home stand against some quality opponents. We begin with tonight's match up, our only meeting this regular season against the Chicago Bulls. Quite frankly, this is a game I'm glad we have the home court advantage for.

Before we get started, let's give a big PTR congratulations to Frenchie for representing the Spurs well this past weekend in Orlando. He took home the Skills Challenge trophy on Saturday, and played 12 minutes in Sunday's Dunk-fest All Star Game. Let's keep it movin'!

For 81 games in 2010-11, our Spurs held the best record in the NBA. The Bulls got hot in the second half of the season, beat the Spurs' butts last February in Chicago (in front of one of the un-classiest crowds I was sorry to be in the middle of), and due to some injuries, and unfortunate play from the Spurs, finished with a league best 62 wins last season. They finished off Indiana in 5 games, and Atlanta in 6, before being LeBron'd in Eastern Conference finals, falling to the Miami Heat in 5 closer-than-the-final-score-reflects games.

This season, they've pretty much picked up where they left off. Only this season, they have a chip on their shoulder. I'm not quite sure I see them getting out of the East this year either, but whomever beats them will have earned it - just like last year. I see these Chicago Bulls kind of the same way the '88, '89, '90 Bulls were. They had, undoubtedly one of the best players on the planet, but that guy didn't quite have the best, or most consistent supporting cast around him, and/or there was always somebody better to get past - it just wasn't Michael's time yet. (Lots will make the case that the same starting 5 was there for '89, and '90 - and they'd be correct. But Scottie Pippen wasn't Scottie yet, and Horace Grant was still coming into his own, as well.) Michael needed to beat Larry, Parish and McHale's Celtics, who were finally un-seated by the Bad Boys of Detroit - and their Jordan Rules. When it was all said and done, the Showtime Lakers of Magic, Byron, Big Game James and AC Green were waiting in the Finals. Boy the East sure was stacked back then! Great basketball!

This year's Bulls team is back and really has not missed a step. I think they're our toughest opponent yet this season. If our guys are planning on a Finals appearence this year, this is not a team I want to play on the road 4 times, so I suggest the Spurs win this game. I get to see these guys play quite a bit (shout out to CSNChicago and ESPN 1000), and they've been very impressive, very tough. They've been without Derrick Rose for something like 10, or 11 games - he always seems day-to-day, but it really does not seem to matter. Somebody steps up in his place every night, be it C.J. Watson (who's absence, if we're lucky, might deplete their bench), Kyle Korver, if he's hitting lights out from 3, Taj Gibson, who's consistency has Spurs fans wanting him in Silver and Black, or big guy Omer Asik. John Lucas III and recent 10-day contract signee Mike James have even stepped up. Let's not forget about the rest of their starting lineup, three guys by the names of Luol Deng, Carlos Boozer and Joakim Noah. Not the most consistent threesome in the game, but you've got to expect one of them to be on.

Numbers wise, they're killing it - top ten in the important categories. The Bulls are ninth in points per game, second in overall rebounding, tops in the league in assists, number two overall in points allowed, at a mere 87.9 per game. Now, you're most likely sitting down while reading this, which is a good thing, but this is one team that the Spurs are actually out shooting from the free throw line, and not by much, but hey - get it here ya can, right? Our Spurs have risen up to 22nd this week at 73.2%, compared to Chicago's 72.9%. I will take it! We're also one percentage point higher from three point line than them - 39.4% compared to 38.3%. Overall field goal percentage has them one-tenth of a point higher - 46% compared to 45.9%, pretty much a wash. Thanks again Hoopdata. So again, I ask... 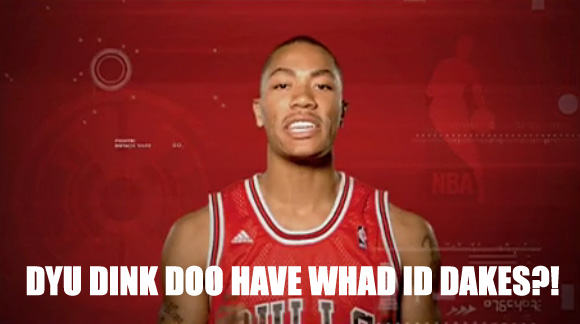 Game Prediction: Hate to be a Negative Nancy here, but I'll be surprised if we win this game. Going for the reverse psychology here - Bulls by 10.

As always Tony must dominate Fisher Rose, and NBA league pass is recommended for those who are willing to pony up the cash. Almost every Spurs game will be broadcast there, which is especially helpful for those of us who aren't in the San Antonio area. Please don't post links to illegal game feeds in the game thread. Links to illegal feeds are not permitted on SBNation, but you can probably find them out there on the internets if you're resourceful and desperate.