State of the Spurs: Inevitability

Share All sharing options for: State of the Spurs: Inevitability

The Spurs are getting old, declining, yada yada yada. Many of us read ESPN's The Whirlwide Liter's the recent article on Grantland about the Spurs mortality. I read it. It left me feeling unhappy. Not the kind of unhappy where you see what's going on and just have to realize that "life happens" and you just need to get through it, but the kind of unhappy like listening to a 13 year old hold forth on deep, life philosophy, as you sit there realizing just how wrong he is about everything. 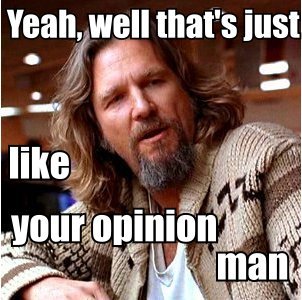 SfS's reaction to the Grantland article
via imagemacros.files.wordpress.com

I'm 24. I'm not too far removed from being that thirteen year old - and as much as I'd like to make this a rant about how wrong that guy is and just make this an argument about his joke of a sports article, I'm not going to. It's been done enough in the comments section here. And apparently LatinD is writing a retort, in ARGENTINE (seriously. This is probably the best Lexicon entry. Ever. GO READ IT FOR FANGIO) The last part probably isn't true. What I am going to talk about, though, is inevitability. What, for our Spurs, is inevitable, and what is not?

I'll begin with what I see as inevitable. The Spurs will lose at least two more games this season in a manner similar to the last one against the Portland Trailblazers. I circled the Portland/Utah back to back a long time ago and said "we're going to rest one of those two games." I then forgot about it and didn't realize while watching the Utah game that we had another one the next night. When I realized that afternoon we had another one, I thought "hey, this could be fun." It wasn't. I turned it off at halftime. We can compete without Tim Duncan. We can compete without Manu Ginobili. Or Tony Parker, or T.J. Ford or Tiago Splitter. Once you start changing the "or" to "and" though, we go from significantly better than average to a lottery team as currently constructed. Our second team might be able to come back against Dallas' starters, and come within five hundredths of hanging a road loss on them, but a game in which our third string plays half the game just isn't going to be competitive.

This brings me to what is most definitely not inevitable. The Spurs becoming "irrelevant". Many of us have lamented over the past few years that the San Antonio Spurs (once Tony declined and Manu, Tim, and Pop were gone) would be doomed to become a lottery team. Or even worse be chained to a roster full of average role players with no cap flexibility going forward (see Pistons, Detroit). This is not inevitable at all. We have the proven smartest front office in the league. Look at our cap structure. Look at the quality of players brought in. Look at the ability to find value. Look at Splitter and Kawhi Leonard- the future. If you don't think the Spurs are prepared, look at how other teams are run. Sure, big markets like LA, Miami, Chicago, and New York will always have an advantage when it comes to recruiting players. There's not really anything that can be done about that. But almost all of those teams also have stupid owners and average front offices at best. Ours has made mistakes, sure. Most will point out Richard Jefferson, I'm still in the camp that disagrees. Oberto and Bowen are out of the league. The only piece we lost was Kurt Thomas. If the initial trade didn't suit your fancy, re-signing him certainly wouldn't have. I'll save the amnesty argument for the offseason. My point is that the Spurs are in a good place now and have set themselves up very well for the future. There's been a lot of praise (and rightfully so) given to former Spurs' assistant GM Sam Presti. He stripped the Thunder (Sonics) down and then rebuilt them from nothing but draft picks and a couple of smart trades. We'll be in the same position a few years from now, when Tim and Manu retire and Tony gets his cheaper old man contract.

I got off track. Sportswriters/analysts/commentators have never been accused of being the brightest-myself included. Hopefully, this little rant will remind everyone what the definition of is is The occasional tank is inevitable. Mediocrity is not. So long as we have Holt-Buford-Popovich, or people that they train, we will be at least relevant, if not perennial "contenders to win the title." 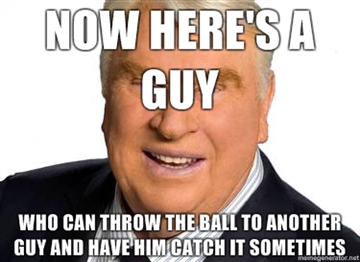 John Madden: the prototype for all sports related talking heads
via 30.media.tumblr.com