Share All sharing options for: Putting Cory Joseph in Perspective

After the annihilation of the Spurs third stringers at the hands of the Blazers, the negativity surrounding Cory Joseph has risen to all time high levels. Granted, it's still pretty insignificant compared to the stratospheric amounts of vitriol guys like Richard Jefferson, Matt Bonner or DeJuan Blair get from their respective "haters" but it's getting to the point where people seem to have given up on Cory, which is almost worse (remember when your mom would say she was not mad, she was just dissappointed? it's like that). While it's necessary to admit that what we've seen from the Spurs' young point guard has been less than encouraging, I believe it's important to keep things in perspective when it comes to young players on stacked teams, especially in a crazy season like this one.

I know that the lockout and the schedule that resulted from it have been used enough times as an excuse that most of us roll our eyes when they're brought up, but the reality is, it's been hard for most players and teams to adapt to them and that goes double for rookies and young players in general. While top tier talents like Kyrie Irving and Ricky Rubio have been able to make the transition to the next level easily, the lack of summer league and training camp and the shortening of pre-season had to be a big blow for the majority of rookies. Point guards in particular always have a difficult time adjusting to the pro game and those problems seem to have intensified this season. Even highly touted players like Brandon Knight, Kemba Walker and Jimmer Fredette have struggled mightily at times while not showing improvement in their game since leaving college.

If the guys that were so high on everybody's draft boards have had a hard time refining their game in post-lockout conditions, it should be no surprise that a guy that was considered a likely second round pick like Joseph has as well. I don't mean to excuse all of Cory's failures, and say they're due to lack of a normal off-season, but it's hard to imagine that he would not have benefited from more time working with the training staff and the chance to pick up tips while practicing with veteran PGs like Tony Parker and T.J. Ford. Unfortunately the lockout and its "no contact between players and team" rules and the compressed schedule made those essential steps in Cory's development impossible. His troubles getting his work visa didn't exactly helped, either. Joseph basically had to transition from one level to the next without the help that rookies from other draft classes receive while playing one of the toughest positions for a young player on the NBA.

The easiest way to dismiss what I just wrote would be to cite Kawhi Leonard as someone that, while not being a PG, doesn't seem fazed at all by coming into a team not knowing the system while managing to, in fact, exceed expectations. The big difference between the two Spurs rookies is that Leonard had elite physical tools and a couple of NBA ready skills (rebounding and defense) coming in; that's why he was selected with the 15th pick instead of the 29th and why most pundits thought he should have gone higher. Joseph, on the other hand, has ideal size for the position but only mediocre athleticism and his point guard instincts are not yet fully developed. The two skills that got him picked in the first round (3-point shooting and perimeter defense) have not yet translated to this level, but the Spurs' scouts thought he had enough upside to warrant the choice. 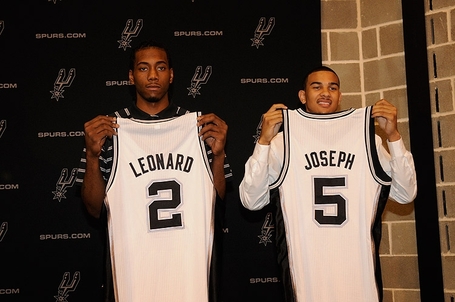 Not all rookies are created equal

While comparing Joseph with lottery-picked point guards would be silly, there's a case to be made against him by noting that other PGs who were selected close to or lower than Joseph have been able to overcome the same tough situation he was in and produce. Norris Cole, who was selected one spot higher than Cory, and even Isaiah Thomas, who was selected with the last pick of the draft, have had better seasons than our rookie so far. While it's entirely possible that they are just plain better players and could go on to have better careers, for now I would simply chuck it up to fit, role and NBA-readiness (both Cole and Thomas are 23) more than skill, since the sample size is too small to allow definitive judgements. Cole is playing for a Miami Heat team that has two of the top five players in the league who also happen to be fantastic playmakers. His role is to back up a mediocre point guard in Mario Chalmers. If he can play acceptable defense and hit open shots with some level of consistency he is doing fine; if he doesn't, his team won't really sweat it. Thomas is kind of in the opposite position. He is the only traditional point guard on a Kings team that lacks playmakers and struggles moving the ball. Any guard that doesn't consider shooting his first and second option is going to be seen as an asset and get playing time in a team that has notorious chuckers Tyreke Evans, Marcus Thornton and John Salmons in the back court. The Kings' reality, coupled with his high energy style of play and interesting narrative, makes it easy to see why Thomas is getting recognition.
Joseph hasn't been so lucky. He's been forced into the fray due to injuries and is expected to back up one of the top PGs in the league on a team that relies on ball movement, dribble penetration, expert pick and roll execution and a steady hand from its guards. It is impossible for him not to disappoint.

Having said that, even I, the founder of the Cory Joseph bandwagon, can see that Joseph is not looking good out there and It's hard to determine if he would excel in a better situation. He seems almost scared most of the time, too tentative for his own good. His 3-point shot, once considered a strength coming out of college is now a liability (.413 in college, .250 as a pro on 2-8 shooting) and he is having a hard time finishing close to the rim around NBA athletes (.429 eFG% from close range. For reference, Parker's is .642). He was consider raw as a playmaker and we can clearly see why when he dribbles aimlessly and gets trapped easily on pick and rolls. Defensively he is not showing the peskiness and awareness that some thought would earn his keep until he shed his combo-guard husk and became a full-fledged floor general. Clearly, he shouldn't be getting minutes for a playoff team. But he was never meant to. Not this year anyway.

I'm sure the Spurs were hoping he was going to be able to provide spot minutes if needed, but Joseph was drafted on potential. Some pundits thought he should have stayed in UT for at least another year so he could develop and the Spurs decision to bring T.J. Ford into the mix is a clear sign that they agreed that Joseph was at least one year away from being able to produce. 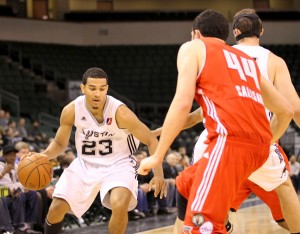 This is the jersey Cory Joseph should be wearing right now.

Next season Cory should find himself in a better position. A summer working on his shot and learning the playbook with the assistant coaches should make him a better offensive weapon. Watching game tape on the best PGs in the game and improving his fundamentals could render him a solid defensive option off the bench. And having a full year to adjust to the NBA lifestyle and level of play should do wonders for his comfort level, like it did for guys like Goran Dragic and Jeff Teague. His fate and the way his career develops will depend on his commitment to improve and the situation in which he finds himself in. If he's forced to play a bigger role than his ready for, he could end up struggling to find a place in the league like fellow 29th pick Toney Douglas, but if his development is handled the right way, I'm convinced he could be a solid rotation player.

For now, I and every other Spurs fan expects Cory to be in Austin when Ford returns, where he should have been this whole time honing his skills if not for injuries. Had he been there I'm sure he would have made a good enough impression to not be the target of our disdain. Hell, maybe he would even be getting the "point guard of the future" treatment from fans. Or not. I can see him backing up Parker for the near future just as easily as I can see him playing in Europe in 3 years. That's what happens with rookies drafted on potential: it's really hard to project what they will become. I know Spurs fans are not used to watching incompetent play from young players and have no patience for it but I think we should keep things in perspective and show a little faith in the young Canadian and the front office that selected him, at least for now. I'm not saying he shouldn't be criticized when he plays poorly, but all criticism should be framed on the context of the tough situation Joseph is in as a 20-year-old, one-and-done project pick. He might prove the most pessimistic of us right and become the latest wasted first rounder. Or he might surprise even the most optimistic of us. I, for one, am willing to wait to find out which is it.