SAN ANTONIO — Watching the evolution of this Spurs team on a nightly basis has been perhaps the most entertaining aspect of LWM. And despite a night at the AT&T Center that appeared lifeless for so long, San Antonio was able to overcome a 19-point deficit to defeat the Houston Rockets 99-91 and move to 14-9 on the season. At 11-7 without Manu Ginobili on the court, the silver and black seem to be treading water pretty well.

Another thing that's been a pleasant surprise: the overall conditioning of Tim Duncan and the way he's altered his game.

I don't think it's even being given the recognition it deserves, especially on a national level: Duncan looks great. Seriously, while Boris Diaw was off somewhere slammin' baguettes during the NBA lockout, Timmy was working. He's lighter, he's quicker, he gets off his feet more easily and he came ready with a deadly jumper. He's made a habit of rolling out energized 20-point games recently for a team that has desperately needed it at times. Wednesday was one of those nights.

The Big Fundamental scored 25 points on Wednesday, 16 of which came in a third quarter that was the ignition point of the Spurs' comeback. San Antonio looked to have nothing in the tank, down 58-40 less than two minutes into the second half and looking very little like the team we've seen at home over the course of the season. This was one of those games you almost expected to feature an early white flag by Gregg Popovich, but that wasn't the case at all.

He continued to play his big man and it paid off. Duncan's third-quarter outburst sent a wave of momentum through a bench that was struggling, and behind his effort and that of his point guard the Spurs responded with a patented methodical run over the course of the third quarter and early fourth. They hit shots after not doing so in the first half, played tight defense and moved the ball, but all that was a result of the play of the remaining two members of the Big 3. Parker added 24 points and four assists in the game as he and Duncan were relentless in their attack of the basket. San Antonio outscored Houston 42-16 in the paint and it eventually wore the Rockets' bigs out as they finished with 22 fouls as a team.

Yeah, we've seen the comebacks this year - some more complete and/or satisfying than others - but this wasn't exactly the same. Four nights ago in Dallas the Spurs seemed similarly listless and it was the bench that inspired a rally that almost (and some might argue should have) resulted in a victory. And we've seen the San Antonio reserves' energy change the face of games this year, but this time the fire under the butt didn't come from that group of youths. This time it was the guys with the rings. Maybe that group of five players we saw come back on the Mavericks on Sunday single-handedly inspired the old guys veterans. Who knows? Regardless, Duncan's performance was vintage, and that's what makes his game on Wednesday even more interesting.

Listen to these numbers and tell me if this sounds like the Duncan you know. According to www.hoopdata.com, Timmy is shooting less than 47 percent on shots at the rim. What's even worse is he's shooting 34.7 percent on shots from three to nine feet away. These are not good shooting percentages for a big man (OK, I know that's painfully obvious, and probably an understatement). But as he moves away from the basket at 10 to 15 feet and 16 to 23 feet, he shoots 48.8 percent and 53 percent, respectively. These numbers appear crazy for a guy like Duncan, but it's clearly a reflection of his age and athletic ability at this point. It's become quite difficult for him to score on the younger, longer big men in the NBA as space shrinks in the paint. Still weird, though. He's exponentially better the farther he moves away from the hoop.

That's what makes the way he played - he repeatedly went right at his man - that much more impressive. Duncan looked like his old self. But while he has looked great physically on the defensive end and on the glass (which probably has as much to do with his limited minutes as it does his offseason conditioning), this year Duncan has been forced to alter the way he plays toward a more jump-shot-oriented style. And just as you would expect from a guy of his talent level, he's done it effectively.

(I'm working here and there on a Duncan piece I might save for a rainy day during the RRT, so I'm going to hold off a bit on further Timmy analysis for now.)

The point here is Duncan turned back the clock on Wednesday. He and Parker took the onus on themselves to get this team back in the game and their teammates responded. We talked about how the bench was unable to get anything going in the first half. In fact, other than Gary Neal's six points before the break, Tiago Splitter was the only other Spur to score; he had two points. The Rockets' bench outscored San Antonio's 20-8 over the first two quarters, but things changed once Duncan decided he'd had enough. The Spurs' reserves put up 33 points in the second half and Neal looked awesome as he continues to round into shape.

I mentioned how entertaining it's been watching this team evolve, and given the success we've seen from Danny Green (who was playing in front of his old North Carolina head coach Roy Williams), Kawhi Leonard and Tiago Splitter it's been refreshing watching the youth movement. But now Neal, who's obviously another one of the young guys himself, is starting to come around after an up-and-down start to the year. He had a great game in Dallas with a season-high 19 points and seven assists (though he followed it with a goose egg in Memphis) and came through with another great effort in a season-high 34 minutes against Houston. Pop has talked about the difficult position Gary has been in given the appendectomy prior to the season and the premature call to duty after the Ginobili injury. Add in the T.J. Ford injury on top of it and Neal has been asked to play out of position a lot of the time. 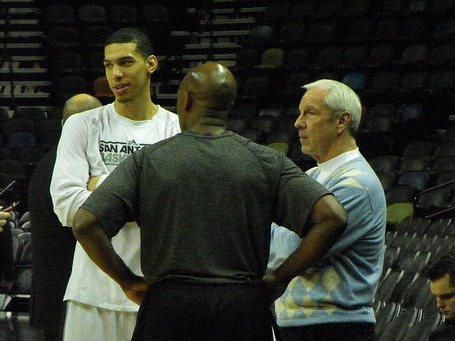 But he's starting to find his niche, and even more importantly that shot is starting to fall a bit more regularly. He was very effective on this night with 15 points and a game-high +26 overall, and his aggressiveness on offense is evidence of his confidence. As he continues to get back to 2010-11 form and the injured players return to the lineup, San Antonio will no doubt improve as the season goes on ... barring any injuries, of course. But most importantly, the defense continues to improve as it's allowing just 87 points per game over its last five.

The Spurs couldn't hit a shot from the outside tonight, but it was that defense and their inside play that earned them the victory. By no means are the Rockets considered the preeminent defensive team in the paint, but San Antonio is a team that can really struggle when perimeter shots aren't falling. If the Spurs are able to manufacture points the way they did Wednesday night they'll be in a great position going forward.

If anything, it's efforts like these that earn victories in unpromising situations. And given the unpredictability of the ever-changing Western Conference landscape, wins like these cannot be underrated. The Spurs are currently the fifth seed in the west, but that can change drastically in just a matter of hours.

More than ever, wins are paramount right now. And as the season continues each game will become that much more important. This one could have very easily gone the other way and left the Spurs sitting on the outside looking in.

But Duncan would have none of it. 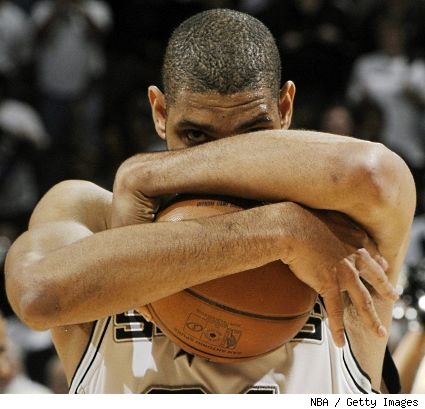 Gary took quite a few shots (14) to get 15 points, but his aggressiveness was key in a game where none of the bench players could get it going in the first half.

Monsieur Consistent kept up his great play against Houston on Wednesday while playing another long 38-minute game. A lot is being demanded of Parker right now, but he's taking it in stride and has really elevated his play with Manu out.

His 16-point third quarter was the catalyst during San Antonio's comeback, and his aggressiveness in the paint was too much for the likes of Samuel Dalembert and Patrick Patterson. This was a vintage Tim Duncan performance as he elected to attack his man rather than spot up for jumpers, which has been his primary source of points over the year.