The Hardest Call for Refs to Make

Share All sharing options for: The Hardest Call for Refs to Make

All human actions have one or more of these seven causes:
chance, nature, compulsions, habit, reason, passion, desire.
- Aristotle

Whenever you hear about how rigorous an NBA referee's job is, the Charge-Block call inevitably comes up. I've even heard it referred to as The Hardest Call In The Game. While there may have been a time when that was the case (the rules for it are certainly extensive) those days are undoubtedly gone. So what is the actual hardest call a ref has to make when adjudicating the world's greatest (televised) indoor sport? I'll be happy to tell you.

The most difficult call for officials is, without a doubt, the Respect for the Game technical foul, specifically the one below in bold, with thanks to WikiAnswers.

This season (2010-11) the NBA has added these overt actions to their list of what constitutes a technical foul:

Being able to tell if a player is trying to fire up his team after a call has gone against them, or whether he is participating in ironic applause, requires (as I've noted before while honing my copy and paste from Wikipedia skills) second-order interpretation of the speaker's (in this case the clapper's) intentions. This compels the ref to note the context of the player's cheering, while simultaneously observing and appraising the questionable acclamation as a potential infraction.

Since it's not realistic for the officiant to whistle a technical every single time a player slaps his hands together during a game, the degree of difficulty for this call is murderously high, and it's necessary to have some kind of mechanism so that the incident can be properly evaluated. This is the job, according to the research of Neuropsychologist Katherine P. Rankin, of the referee's right parahippocampal gyrus (RPG) which is responsible for judging the social situation.

But just how good the RPG is at its job, and the differences from referee to referee as to physiology, history of head trauma (which can impair the ability to comprehend sarcasm), tendency to use sarcasm himself, etc. -- these all play a part in each individual officials capacity for recognizing and correctly responding to the ovation and deciding if it is sincere and therefore legal, or whether it's intended to be perceived as the opposite of its apparent meaning and worthy of a whistle. Further complicating things are factors like every player's communication style, how well each ref knows the clapper in question, the relative social skills of the two individuals involved in any such potential technical foul, not to mention their respective histories and baggage. Was the ref regularly teased by the jocks at his school? Does the player have a problem with authority figures due to his rocky relationship with his father, uncle, high school teacher? What does the player's dossier (stored and updated by league staff) state about his tendency to quickly and repeatedly bring his hands together in a satirical manner, and did the ref have the time to fully read and memorize the information, per Commissioner Stern's commands, prior to the game?

Such possibilities are endless and serve to make a minefield of the hardwood, and that's what makes this not only the single most challenging task for NBA refs, but also the most difficult call for any official, in any sport. Ever. Because it's not just knowledge of the rulebook that must be mastered in order to oversee contests, those who must accurately perceive sarcastic clapping have to form a hypothesis as to what the player's unspoken intentions are. To put it bluntly, the Association expects its refs to read minds.

While this is clearly outside the bounds of what modern neuroscience informs us that the average human brain is capable of, it sheds some very revealing light onto the kinds of people who are currently employed as referees. Why is someone like Dick Bavetta still an NBA official despite the fact that, according to Basketball-refs.com, he died three years ago? Why is Tommy Nunez, Jr. still working for the league when his only qualification seems to be that his father is the current Group Supervisor? Why do these individuals continue to oversee games when they appear to have no reason to be employed as officials beyond the fact they they used to be a professional basketball player, formerly built Habitat for Humanity houses (all now condemned), raised fighting roosters in Chile, or worked as a loan officer whose decisions directly led to the financial market crash in 2008? Only one reason makes sense. They have the power to read the minds of NBA players -- or they've somehow convinced Don Vaden that they can.

So, the next time you're watching a game that's being officiated by the inimitable Joey Crawford, keep in mind that not everyone can interpret irony in such small amounts that others would argue that none was intended at all. His talent is an exceptional one, and for that reason he has earned the right, along with the rest of those with such abilities, to wear the colors of a referee of the National Basketball Association. 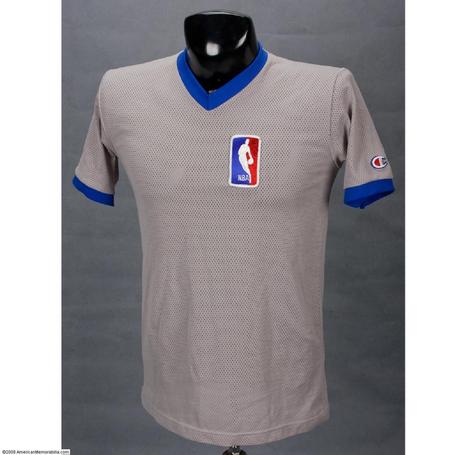