Tonight, the Spurs took a trip to the Palace of Auburn Hills to play a Detroit team that, statistically, is at best the third worst team in the league. San Antonio, apparently befuddled by the early start time, waited until about five minutes left in the first quarter to show up. They took a lead in to the second quarter, and controlled the game, keeping the Pistons at Kawhi Leonard's arms length throughout...until the fourth quarter. Ben Wallace, in what he says is his last season, dominated everything and everyone.

In my preview for Detroit Bad Boys, I wrote that:

Duncan, for those of you who haven't been following too closely, is having a solid stretch of games, putting up several double doubles over the past few weeks- in under 30 minutes of play. He is still the most efficient player in basketball. He has, though, lost most of his power moves and is more of a finesse and jump shooting player now. Moose is going to have his hands full, but I'm especially curious to see how this plays out. On the other end, Duncan will also have his hands full. No sugarcoat- Moose is probably the best young big in the league and one of my current favorite non-Spurs.

Monroe had a bad game, in large part because of Tim Duncan. Duncan, and you can argue with me all you want about this, is still one of the 5 best bigs in the league right now. Monroe, though, is the future- he is easily the most complete PF/C under the age of 25. I'd take him and his style of play, and his attitude, over Dwight Howard and Andrew Bynum anyday. Duncan frustrated him at every turn, although Monroe did the same to Duncan for awhile. Duncan winning this matchup essentially won us the game, because if Monroe had a stat line anywhere near his averages, Detroit likely would have stole this one.

Other than that, I'm not sure what to take away from this game. Manu Ginobili is still playing his way back into shape, and while his shot looks horrible right now (to be expected) he finished with 7 assists, a block, and two key flops that basically won the game for the Spurs. I hate flopping, but I hate it significantly less when:

So I'm willing to overlook it. The story of the game, though was Ben Wallace. Recently benched in favor of starting Jason Maxiell, Ben Wallace showed tonight why he's a likely (and should be) Hall of Famer. He hit his 7th career three pointer to bring the Pistons to within striking distance, then the next trip down the floor came up with a save as he was flying out of bounds that led to a Pistons bucket, that, if I'm not mistaken, gave them their first lead since the first quarter. Tonight's game marked game number 1054 for Big Ben. An impressive but seemingly unremarkable total until you consider that Wallace was undrafted out of college, and tonight he passed former Spur Avery Johnson for most games played by an undrafted player. He is the type of player every team wishes they had, and every young player should look up to. Unconcerned with stats, excellent one on one and help defender, focuses on doing the dirty work and, even though he's rarely if ever been more than the 5th option on offense, reportedly practices his shot more than anyone else on the Pistons. Consummate professional is an understatement. Since we only play Detroit once this year, this was his final game against the Spurs, and he went out in style. It may be unusual (even potentially frowned upon) to write so much about a non-Spur in a recap, but he earned it with his overall level of play, especially sense the only Spur that matched it consistently all night was Tim Duncan. 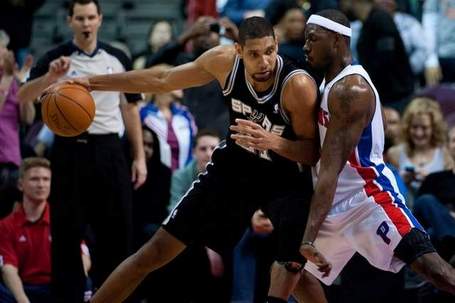 Some quick hitters, followed by three stars: If shooting slumps are contagious, we need to quarantine Danny Green and keep him away from Gary Neal. Tonight was not a good night for either of them shooting- although Green continues to do an excellent job impacting the game with his defense and passing. I realize Neal had more assists tonight, but Green seems to make smarter plays with the ball more often than not. Kawhi Leonard continued his hot streak, *and* continues to impact the game defensively. 2-3 from 3, 4-6 overall, 2 steals, a block, and a nice swoop and scoop finger roll off the glass that earned him an and-1. He continues to impress me with not only his athleticism and aggressiveness, but also his intelligence and ability to fit in the system. Richard Jefferson needs to learn a few things from him about that.

2B. Ben Wallace- I don't care that he doesn't play for us. Dude's a baller and single handedly kept this game close.

Next up, the Toronto Raptors.