Why Blogs Matter: Growing Up a Sports Fan In Small Market, USA

J.R. Wilco's story about growing up as a sports fan in Houston leads in an unexpected direction.

Share All sharing options for: Why Blogs Matter: Growing Up a Sports Fan In Small Market, USA

I grew up cheering for a "small market team" - the Houston Rockets, who lost to the Boston Celtics in the NBA Finals twice in 5 years. As a child, all I ever heard about was the Lakers/Celtics rivalry and how awesome and iconic those teams were. So after Houston had been knocked out of the playoffs and it was down to just two teams, I'd always root for the Lakers because they were the Western Conference's representative and I hoped that they would take down the hated Celtics. I hated the Lakers, too, of course, but you have to pick your battles. 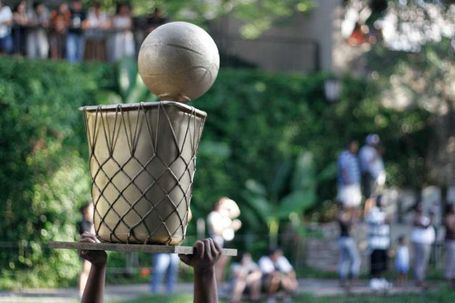 Whenever I watched sports on national TV, it was rarely the Rockets. And for the Rockets coverage I did see, even as a child, I could tell the difference in the kind of broadcast I was seeing. The announcers weren't as polished. The production quality wasn't as good - the lighting and the graphics looked homespun and hokey instead of slick and polished. But they were my hometown team and I remember following them on a portable TV with a 2.5" by 2.5" screen that had to have measured about 4"x7"x18" and weighed over 10 pounds. It had a handle attached to the top and an antenna for picking up the signal while on the go. I remember having it in the back of my dad's car with the power plugged into a huge adapter that went into the cigarette lighter, and watching the static creating that familiar snowstorm effect (that was the 80's version of a lagging feed) while I tried to discern Rodney McCray running the fast break in some random mid-season contest where he was going off for the most points in a quarter any Rocket guard had ever scored up to then. This offensive display, of course, made me certain he'd be an All Star some day, and take Houston to the promised land of the NBA Championship.

So, whenever the Rockets played on national TV, it was a rare event. When there was a story on Moses Malone, or Ralph Sampson or Hakeem Olajuwon in Sports Illustrated, it was like Christmas in April. When USA Today started up, and they did a story on the streaking Rockets, starting their 1992 season off with twelve wins in a row, I was in sports fan heaven. But since that was all the national press I had access to, when they finally won Houston's first trophy, I never felt like they got any real recognition -- even the OJ "chase" pushed FINALS coverage completely off the television IN MY OWN HOMETOWN! It wasn't enough that the assembled MTM (Media That Mattered) had already decided that this was the worst Finals matchup and the most boring style of play they'd ever seen, because the scoring was down. Never mind that it was a 7 game series, with all of the drama that entails. Forget the fact that every single contest was decided by single digits (avg margin of victory: 6.1 points). It was christened "unwatchable" compared to the wonder and glory of Jordan walking all over the competition. (It was years afterwards that I would even wonder why someone paid to write about the NBA would take a stance that could possibly lessen the enjoyment of the very fans that were following the games, the teams, and the coverage, but that's likely a story for another time).

So, I had to buy the commemorative edition of SI's Championship Year magazine, in order feel like my team had finally gotten the kind of coverage the good teams are supposed to get; like the franchises I'd been watching win rings my whole life while hoping that one day it would be my team up there. And while the feeling was everything I'd hoped it would be, it was somewhat incomplete, because the positive media storm that I expected never happened. In fact, there was barely a breeze.

And the next year, when they were The Defending Champions, they weren't treated differently than they always had been. The same teams that had always hogged the main share of media attention were yet again the ones "likely to win it all this year," and the Rockets were treated like nothing more than a one-year-wonder blip on pages of history. Which made it all the sweeter for me when the Rockets eventually overcame that year's injuries, adjusted to the trade for Clyde Drexler, and went on a post-season run like few teams had before; beating four 50-win teams on their way to a 2nd straight title. When Rudy T. admonished everyone to "Never underestimate the heart of a champion!" it was as if he was speaking my thoughts directly into the face of all of the assembled journalists who I felt sure would realize their obvious mistake and commit to changing their ways. Now, I told myself, the team will get the respect it deserves. Now the coverage will come. Now the nation will treat them they way they've been handling, promoting, and publicizing the Knicks, and the Lakers and the Celtics, and the Bulls.

But it never happened.

First, what I was waiting for would never come. The moment of universal acclaim of the cognoscenti would always remain just out of reach and unrealized. The reason went beyond the issue of good and bad teams; beyond the difference between media friendly superstars who live in the limelight as if it was a birthright, and humble men going about the business of playing with excellence and accepting the result of their efforts with dignity and grace. The reason was that what I was longing for could only exist in a universe where I had been born in a large market, rooting for a team that the league wanted to promote and the media had christened as one of its darlings.

Second, those teams of my youth that I'd spent so much time envying; they weren't better than my team because they were celebrated and honored and praised to the heights that language allowed, and through this repetition, raised to the status of legends. That was only happening because of the city they were from. I saw that there was ten times the coverage of an LA win because there's that much more appetite for stories about a dominant Los Angeles team. And ten times the number of people claiming (at the moment of the trophy presentation, anyway) to be fans of the latest mega-market team's ultimate victory. Far more people than there were wanting to hear the story of my lowly hometown boys done good. And even if there weren't more fans of the other teams, then there were definitely more people who, while in the position to wield the power of the press, preferred to pander to the masses rather than appreciate the success of a smaller market franchise, or give anything more than cursory credit to a team that wasn't among their favored few.

Third, I realized that I was looking for validation from a source that should really have no influence over me at all. I had seen the game myself, why should I wait to read the AP recap to see if I was right in how I thought the contest had gone? I had followed the team all year, what possible column from the respected writer of the month should make me feel as if enough appreciation had been given? They had my appreciation, and that should be enough. I knew that I thought highly of them, and that would have to suffice.

Years passed, Hakeem aged, the Rockets refused to respect their living legend in his final years. I moved to Austin, and left my hometown team behind. The internet hit its stride and the local team began to make good. I watched from a distance in '98-99, started following the Spurs more closely, suffered through the dreaded L.A. threepeat, and eventually fell in fan-love for the first time as an adult with a young foreign shooting guard with a weird name, a big nose and an uncanny way on the hardwood.

Now, here I am with an opportunity to help give all of the Spurs fans out there the kind of coverage of their team that I had so longed for in vain. A regular celebration of their exploits, and a reinforcement of the knowledge that it's unimportant whether a self-styled leader of the world of sports deigns to drop an infrequent morsel into the dish of the hungry mutt that lives inside every fanatic. Because, while it's nice every once in a while to hear that someone who shapes conventional wisdom has glanced at my team and responded with something complimentary, I don't NEED their notice. I've been inoculated from that need through regular coverage, analysis, frivolity, and psychologically satisfying conversation with those who are most qualified to create it: the observant fans who follow the team every single day.

My fellow £ers, thanks for helping to make Pounding the Rock the place it is. The many people who collaborate to create the content we post daily, really appreciate you and want to make this site all that it can be. Thanks for reading, commenting, and cheering for the Spurs. I look forward to doing the same for years to come. 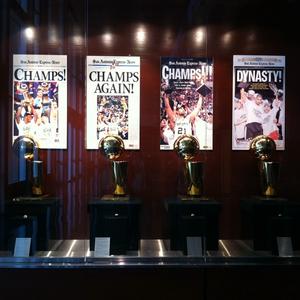