The offensive juggernaut known as the San Antonio Spurs have gotten better at defense this season. Here's a look at some of the Spurs' D strengths and weaknesses.

Share All sharing options for: Dissecting the Spurs' defense

The most exciting development of the season for Spurs fans is probably the defensive improvements of the team. The go-to stat is probably defensive rating which, for those of you who don't follow advanced stats, is the number of points allowed per 100 possessions. It is better than points allowed per game because it accounts for pace. The Spurs' defensive rating is 98.9, good for 6th in the league behind the Pacers, Grizzlies, Clippers, Bulls and Hawks. Some may prefer field goal percentage allowed, in which the Spurs are tied for 9th at 48.8%, closely behind the Heat (48.7%), the Nuggets (48.6%) and the Grizzlies (48.5%).

But let's dig deeper and dissect the Spurs' defense a little more.

Everyone knows by now that the two most efficient shots in basketball are the ones taken at the rim and from the corner. For years now, the Spurs have made it an integral part of their offense to get those shots. They do the opposite on defense: they prevent opponents from taking those high quality looks or make them miss. The Spurs allow the 10th-least amount of corner threes, with the 7th-worst percentage. Considering the Spurs have played more games than the teams that have better rankings, it's not crazy to think they are a top five team at guarding corner three-pointers.

The Spurs allowed a lot of shots in the restricted area, but manage to make the other team miss a lot of those. Opponents only score on 56% of attempts from the restricted area, good for 7th in the league. For a team whose fanbase has been asking for a shot blocking big for years, the Spurs do a great job of protecting the rim, anchored by Tim Duncan's 2.5 blocks a game. How much Splitter starting helps remains unclear, since in the last six games the Spurs have actually allowed a slightly higher percentage (57.1%), but the pairing throughout the season has allowed almost two points in the paint less.

Unfortunately, they are still terrible at guarding jumpers

I've been beating on this drum for a long time but I still think this could be the team's Achilles' heel in the playoffs. The Spurs allow both the most amount and the highest percentage on two pointers outside of the painted area in the league. It's by design; I know that. The Spurs need to allow something and letting Serge Ibaka shoot jumpers is better than letting Westbrook get to the rim, where he can kick it out for an open three or draw a foul. It's working too, as the Spurs are still very good on defense despite being awful at guarding the mid range, mostly because they deter those good shots by conceding jumpers. But the big, big problem is that the Spurs simply can not adjust.

The bigs are too slow to hedge and recover on pick and pops or really contest after the perimeter defender chases his guy off the three point line. In a playoff game decided by a few points, allowing players that have proven they can hit a J to take a completely unguarded one could be deadly. The only solution I can think of is going with a lineup that can switch everything, but that's not a good idea for more than a couple of possessions at a time. Let's hope Pop finds a way to solve that huge chink in the Spurs' armor.

With Leonard off the court, the Spurs get 8.0 steals while their opponents get 8.8. With Leonard on the court, they get 10.3 to their opponents' 7.1. With Leonard on the court, the Spurs get 18.4 points off turnovers and with him off only 13.4. Their opponents go from 17.5 points off turnovers with him on the bench to 12.1. The difference is remarkable. When Leonard plays, the Spurs become the aggressor on defense and get the live ball turnovers that result in easy transition opportunities. For a team that usually plays containment defense (stay in front of your man, contest the shot, and pull down the rebound), having someone that can disrupt the flow of the other team's offense is invaluable. The Spurs are 22-8 even though they didn't have Leonard for 13 of those games. I'm giddy just thinking about how good they could be on defense with The Big Island back in the starting lineup.

The Spurs are overloading the strong side more

Every team overloads the strong side to some extent, especially on side pick and rolls. What I mean by overloading the strong side is basically having one of the weak side players slide to the strong side to cover the hole the offense is trying to create. That leaves the team playing zone on the weak side, usually one-on-two or two-on-three. When the ball swings, the helper recovers and the team goes back to man defense on the ball. Even in non pick and roll situations from the side, it's common practice, with teams that have particularly fast wings doing it more pronouncedly. The Spurs rarely do it, often preferring to cover shooters closely.

But they do go to it in certain situations, like when there is a mismatch. For example, they overload the strong side aggressively against good face up threats in the mid post. Here's an example from the first Spurs-Raptors game: 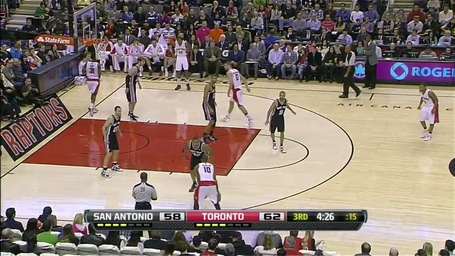 Here, Derozan has Diaw on him and the Raptors wisely isolate him against a slower defender. Ginobili's man cuts baseline to the opposing corner, but Manu stays on the strong side, denying the path to the basket. If Derozan drives baseline, Ginobili will be there. 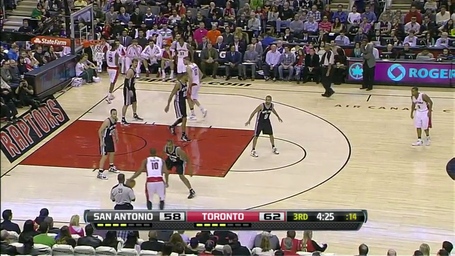 Since the Raptors' spacing is atrocious, Splitter can easily cover the two players in the corner from a cross court pass and Duncan has Valanaciunas. Parker stays with his man but could help if Derozan tries to penetrate through the middle. 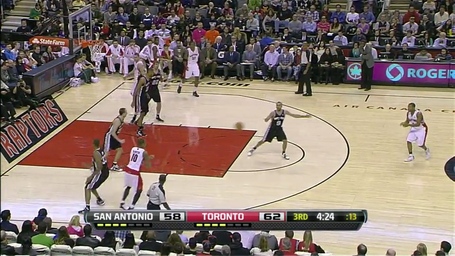 The ball is swung to the point guard who should be able to find someone open before the defense recovered, if the Raptors hadn't spaced the floor so poorly. Had Ross moved to where the referee is, he'd have forced Duncan or Splitter to step to the perimeter. 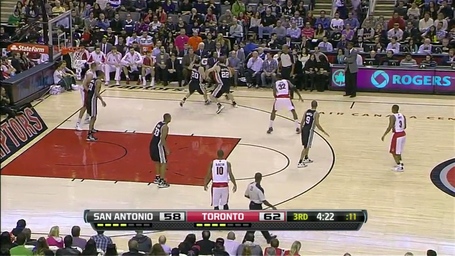 Ginobili recovers. A clear mismatch for the Raptors ends with a trapped Terrence Ross.

This has happened a number of times, especially when the shot clock is winding down. The Spurs don't double to get the ball out of that player's hands but deny penetration and make the opponent swing the ball, take a jumper or penetrate against one or two help defenders. Other examples include Zach Randolph against Bonner, Gay against De Colo and a number of times in the Knicks, in which Blair was on Anthony, including one P&R play. It happened in last year's playoffs when Blake Griffin faced up in the mid post against Diaw, for example, but I'm noticing it happening more and more this season. Good teams like the Knicks got good looks out of it, but the Spurs were smart enough to usually help off a bad shooter like Brewer. If the rotations are crisp and the helper recovers fast, it is a great weapon to have. Let's see if the Spurs continue to use it.