Which two Spurs bring out the best in each other?

Share All sharing options for: Which two Spurs bring out the best in each other?

Chemistry is an often overused and, dare I say, overrated term when it comes to teams and players. Stockton and Malone had undeniable chemistry, but more than anything the fact that they were also unbelievably good players is what made them one of the signature pairings in the history of the NBA. There are also lots of examples of good players being elevated by one of the elite; Manu Ginobili makes pretty much everyone around him better, Dirk earned J.J. Barea a hefty contract, and Jason Kidd should apologize to Spurs fans for making us think Richard Jefferson was ever a star.

What's not as common is to actually see guys that, without being what most would call great, seem to have a symbiotic relationship that makes both better in different ways. I believe that is happening with Nando De Colo and Tiago Splitter.

First, the numbers. These are the stats for Splitter with different Spurs' creators on and off the court. I focused on offensive rating, net rating (off rtg-def rtg), true shooting percentage, and points scored per 36 minutes. Mills and Joseph are excluded since the sample size was just too small (in Joseph's case) or the results too brutal (in Mills' case). For reference, Splitter's season numbers in these categories are: 107 offensive rating, 8.2 net rating, 65.8% true shooting percentage, and 17.7 points per 36 minutes. Red represents below season averages, yellow represents above season averages and green represents the best numbers. 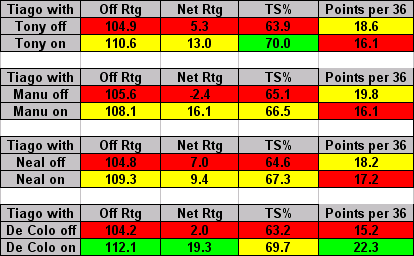 (Click on it to expand it. Stats vis NBA.com/Stats)

The only stat in which someone seems to have a more positive effect on Tiago than De Colo is true shooting percentage where Parker reigns supreme, but it is by only 0.3 percent and also with fewer shots. Other than that, De Colo seems to be the Spurs' playmaker that brings the best out of Splitter. Why is that?

After reviewing all of Splitter's made shots when Nando was on the court, the answer becomes clear: De Colo is always looking to pass and Splitter tries to always make himself available. 13 of Tiago's 35 makes in lineups featuring Nando were directly assisted by De Colo, who also got hockey assists on three other plays. That means when they were together on the court, De Colo was directly or indirectly responsible for almost half of Tiago's makes.

Most of those came, as expected, on the pick and roll. But there were also five dimes in transition, one on a drive and dish, and one where Nando hit a cutting Splitter. Between Splitter's understanding of space and how to attack it and Nando's amazing court vision and timing, these two make an extremely dangerous pair to defend - if you give them an inch, they'll take advantage.

What also became apparent as I watched tape was how much Nando's passing resembled Manu's. Now, it's unlikely that De Colo will ever be anything close to the scorer Manu is at the rim, and his shot has a long way to go before we can consider it even dependable, but the similarities are there, both good and bad. They both have tremendous instincts and BBIQ and their court vision and ability to make passes in tight spaces is remarkable, but these traits make them quite prone to overconfidence and the turnovers that often come with it. Manu more than makes up for it with his scoring and disruptive defense, but Nando isn't quite there yet.

The great news is, when he's on, De Colo provides something no other Spurs guard other than Ginobili offers: deft pick and roll playmaking. Gary Neal has improved, Mills can run it in a pinch, and Tony Parker does a solid job when he's not looking to score, but none of them have that perfect vision and timing Manu and Nando have. The ability to find the trailer in transition also benefits guys like Splitter, who always runs the court trailing the break. It is too bad the De Colo-Blair pairing has only shared the court for a measly 40 minutes (with pretty terrible results, I might add), because I think DeJuan would also benefit from playing with Nando.

Now, this does not mean De Colo should start getting a lot more minutes. It's just that playing him with Splitter whenever possible seems like a no-brainer, especially since the team seems to do extremely well with those two share the court. Yes, some of these numbers were achieved in garbage time and any stats dealing with players that have shared the court for only 143 minutes are certainly going to suffer from sample size issues (so feel free to take all of this with a grain of salt), but the numbers do seem clear. When Nando and Tiago share the court, the Spurs have a net rating of 19.3, get almost 75% of available defensive boards, and boast some great effective field goal and true shooting percentages.

Again, De Colo's numbers are not particularly great on their own, but when paired with Splitter, and ideally another playmaker and shooter, the Spurs might have that spark they often need when the starters can't take over a game. It also means Manu Ginobili doesn't have to be solely relied upon to create for others in the second unit. Manu has shared only half of the minutes of Nando-and-Tiago tandem, and that seems like the right balance. Playing the two crafty guards together can be great and would allow Ginobili to be off the ball more, but it might also prove too risky in terms of turnovers.

It's extremely early to project exactly what kind of a player De Colo will be. Sometimes (like when he seems turnover prone) he can be infuriating, and sometimes he evokes memories of a younger Manu with his crazy out-of-the-blue passes. But it will surely be interesting to see how he develops and how many minutes Pop entrusts him with. All I know is I would be delighted if almost all of them are spent next to Tiago.

And I have a feeling Splitter would agree.

All stats courtesy of NBA.com/Stats