After two games, it has become clear that Kawhi Leonard has taken a step forward in his abilities on defense. How is he doing it, and what are the implications?

Coming into the season, most of us expected Kawhi Leonard to take a step forward on offense, after a surprising rookie campaign and a promising run in Summer League. The idea of having a tertiary creator that was not a defensive sieve (sorry Gary) was exciting, and we were looking for him to gain the ability to create his own shot as a sign of development. Two exceptional games later, it looks like Leonard could become a key part of the team by simply continuing to play his brand of hyper-aggressive defense. If last night's clutch steal is not enough to make the point, allow me to explain.

As you know, the Spurs are disciplined on defense and that allows them to cover up some individual weaknesses. The problem is, when teams get used to the Spurs' defensive schemes and adjust, the Spurs have no way of responding. They play the odds and try to force teams to shoot low percentage shots whenever possible, but that is the extent of their defensive repertoire. Forcing turnovers and being aggressive are afterthoughts. The Spurs' way is to contain, not disrupt, and without elite individual defenders, that tactic has proven to be flawed. This is why what Leonard is doing could be a game-changer.

I wrote this about Kawhi in the YCDB series:

Help defense: When the guy he's guarding is not a threat to score, Leonard could roam the paint, swiping at penetrating guards, going for blocks and generally making life hell for the offense. With those long limbs, quick hands and decent hops, Leonard could be a nightmare for sloppy offensive players, just like Manu Ginobili is. For years, every player facing the Spurs had to be aware of where Manu was, lest they get blocked, called for a charge or have the ball stolen. I truly believe Leonard could become a similar type of pest. Being a disciplined defender is still the key to the Spurs' defense, but gambling a little while helping on penetrations and post ups could improve the Spurs interior defense.

It is early in the season, but it seems Leonard could exceed even that lofty expectation, since he is not only being disruptive on and away from the ball, but even when defending an elite player. By bringing some unpredictability to the defense, Leonard is making life harder for every opponent on the floor, including the two-time NBA scoring champion, Kevin Durant. While that steal with 8 seconds left will rightfully get all the attention, Leonard was hounding Durant the entire game. During a two-minute span in the first quarter, Leonard got three steals and planted the seed for what was going to be his triumphant, clutch moment. 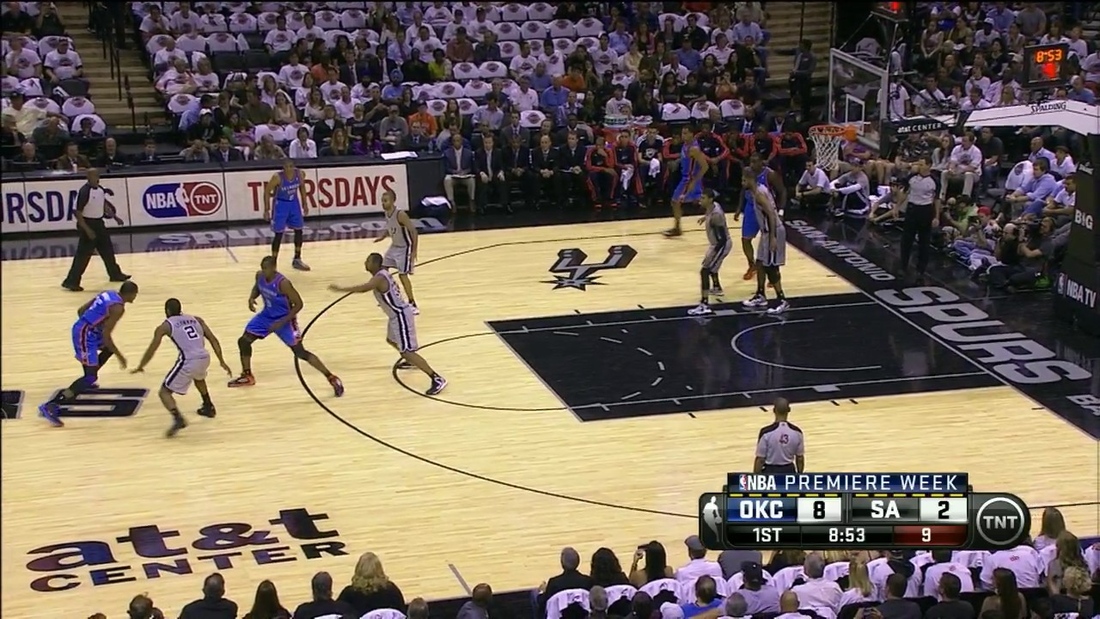 Durant uses a high screen from Ibaka to get past Leonard while the rest of OKC's players are on the right side, setting up an Ibaka roll or pop. 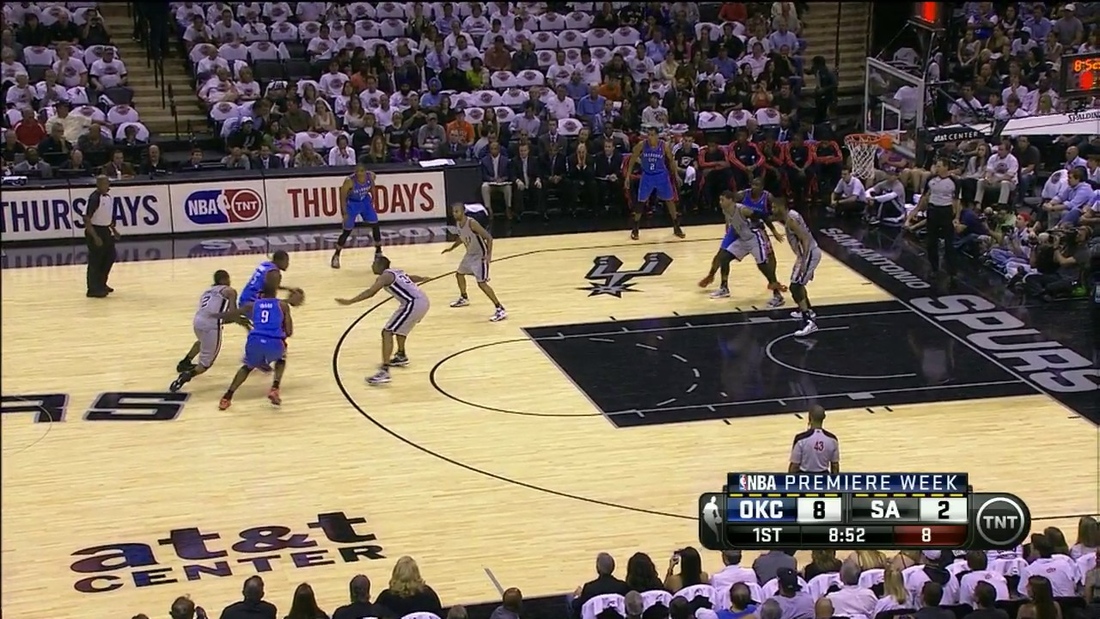 It seems to work as Leonard is behind Durant, who is well defended by Diaw and Parker, while Duncan and Green move to the middle to prevent an easy basket by a rolling Ibaka. Durant could try to pass the ball to Ibaka, who would be open to take a long jumper. 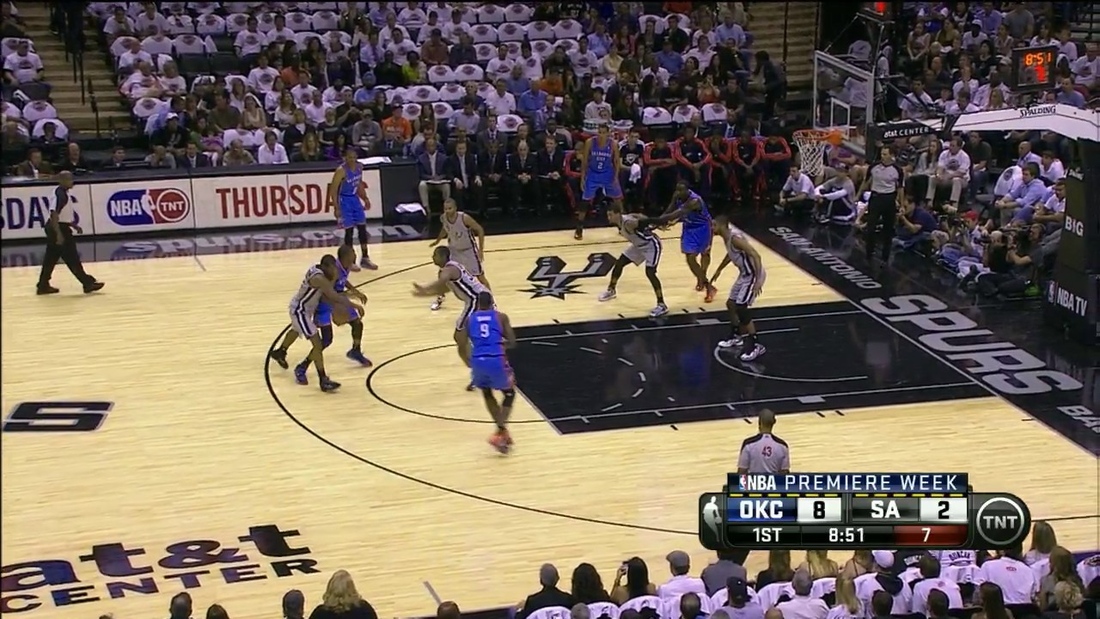 But then, out of nowhere, Leonard recovers quickly and swipes at the ball before Durant could react. Parker leaks out and Leonard passes him the ball for the easy layup. 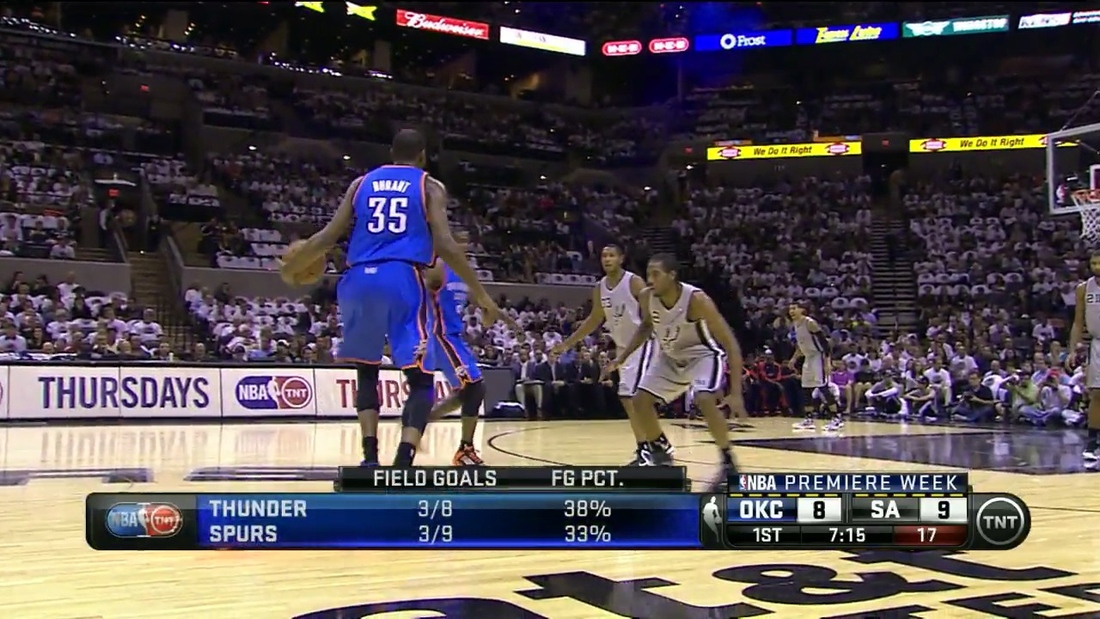 Ibaka attempts to set another high screen for Durant, with Sefolosha and Westbrook spreading the floor in the corners. 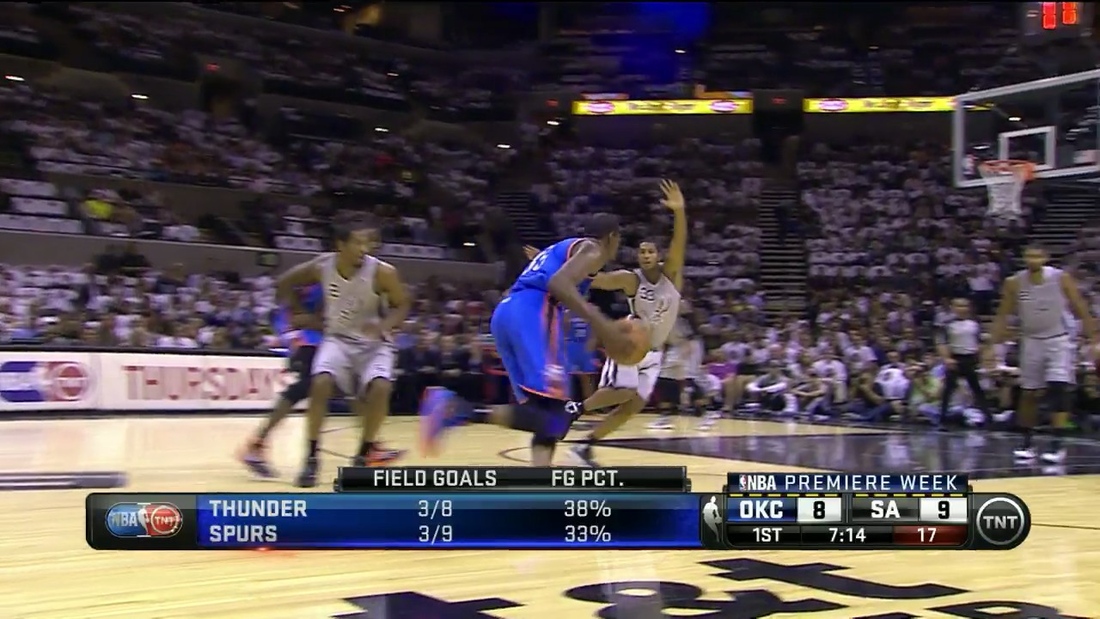 This time, while Leonard tries to get in position to fight through the screen, Durant ignores it and crosses over. That leaves him attacking Diaw, until Leonard recovers while Ibaka starts to roll. 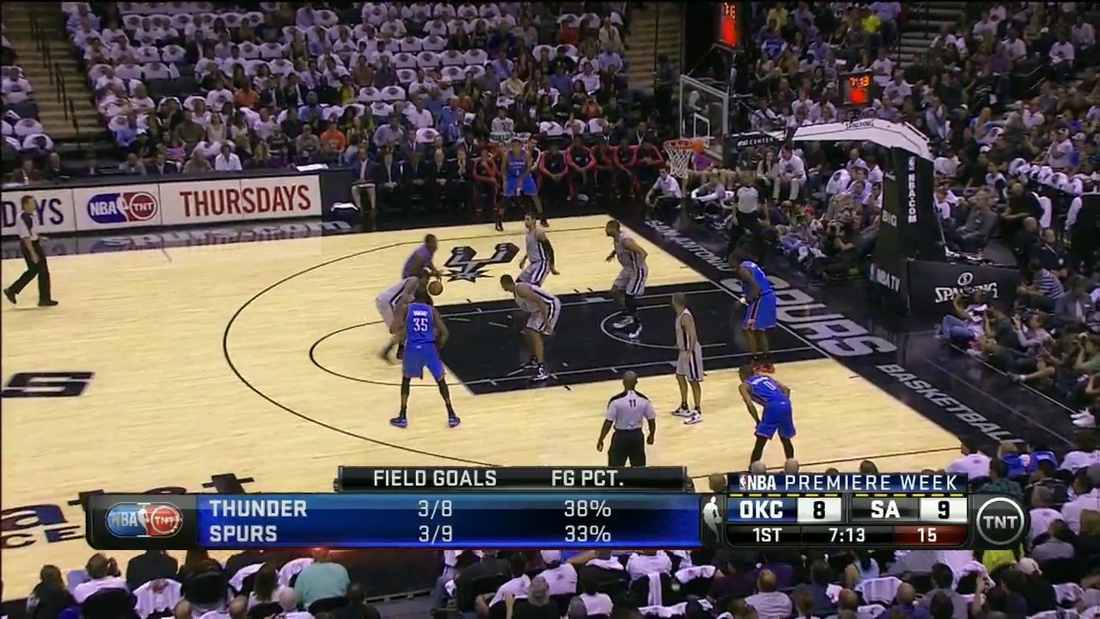 With Leonard out of position, and Diaw committed to contesting a jumper, Durant has Ibaka rolling to the basket and tries to feed him the ball. Leonard reads the play and instead of rushing back to Durant, cuts the passing angle and steals the bounce pass. He leads the fast-break and finds Parker for an easy layup. 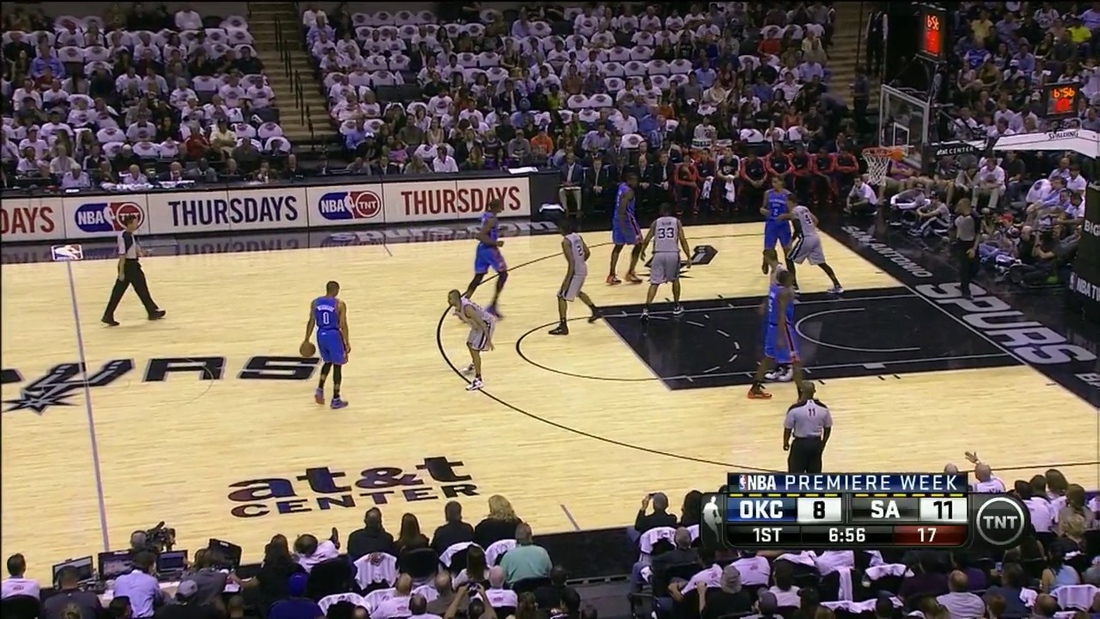 This is perhaps the most impressive of the three because the Thunder had just run this exact same play on the opposite side of the court a couple of possessions earlier, and Leonard fell for it. We see Ibaka, Sefolosha and Durant on the left side and Perkins on the right. 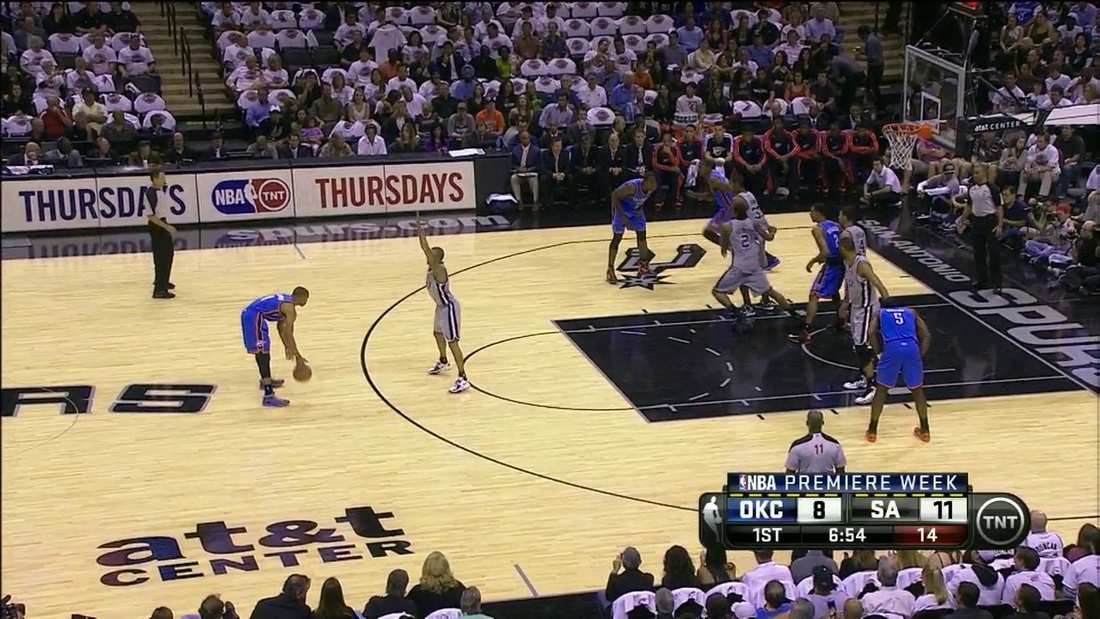 Sefolosha starts moving to the middle and it looks like Durant has a choice to either curl of off Thabo's and Perkins' screens to the right side or use Ibaka's screen on the left side. Leonard was anticipating Durant to go right, which makes him move to the middle, but Durant chooses to go left and use Ibaka's screen. 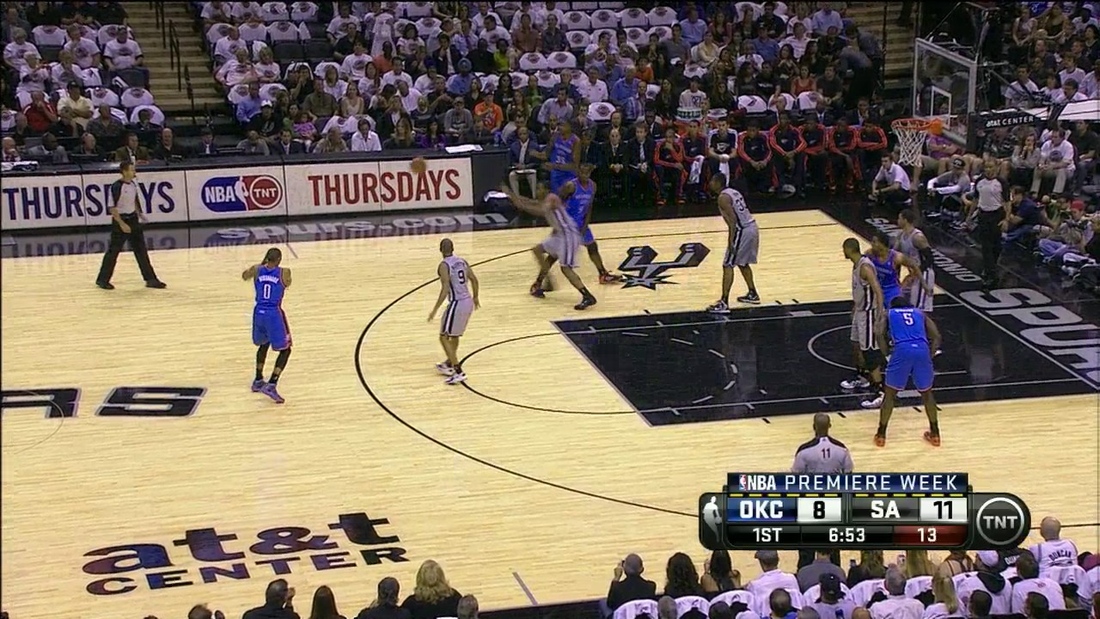 A couple of possessions before, the Thunder ran the same play, and Leonard tried to stay close to Durant by fighting through the screen. That made Diaw hedge while Kawhi recovered, and Ibaka had a clear path to the basket for an easy score. This time, Leonard had learned from the previous play and knew where the ball would go. Instead of getting caught by Ibaka's screen, he played the passing lane and got the steal.

He had two more steals, one of which you have probably seen a couple of times in the highlights of last night's game. Tied at 84 with 8 seconds remaining, Leonard anticipated a lazy, predictable pass by Westbrook. He didn't get caught on the three screens Sefolosha, Ibaka and Perkins consecutively set. Instead he jumped the passing lane and got the Spurs the ball back. Parker deserves the credit for canning a difficult shot, but the win would not have been possible without Leonard's fantastic defense on arguably the best scorer in the league. From early on, Leonard started reading the Thunder's plays and figured out how to bypass screens and learned the angles of Westbrook's passes. He made the decision to run a pick and roll with Durant as the ball handler, much harder on Scott Brooks by causing turnovers in a couple of previous plays. Kawhi was the aggressor throughout the game, which allowed him to make that late game steal.

The key to Leonard's new defensive tendencies is for him to understand when to go for the always risky steal and when to play simple containment defense. The early returns seems to suggest he is way ahead of the curve in that department, and the fact that he also found the right moments to play help defense, even when he was guarding Kevin Durant, is encouraging. PtR's official position on Leonard seems to be, "Let's temper expectations", and I agree with that. Yet, the thought of the Spurs adding another disruptive defensive player to the perimeter makes me salivate at the prospect of easy transition buckets and better overall defensive performances. For years, Manu was the team's sole X-factor on defense, the risk taker that shifted the momentum of the game with an improbable play. It seems he might have some company.